In the springtime, usually April or May, Aldi begins to sell various kid-centric outdoor products, including sports-themed games and aquatic stuff. The Outdoor Active Disc Swing, a springtime Special Buy (ALDI Find), is part of that collection of products. 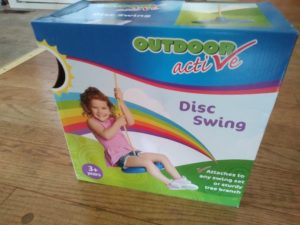 Outdoor Active is, as best as we can tell, an Aldi house brand, although this is the first (and, to date, only) time we’ve seen it. The after sales support information points to an email address at 801service.net, a company Aldi has used before with some of its other products.

The Disc Swing retails for $7.99, which is on the cheaper end of disc swings you’ll find. The label on the disc says that it’s designed for kids ages 3-10 and also has a weight limit of 220 pounds. (We’ll leave it to you to decide if the swing can accommodate anyone older.) It comes with the swing itself, a rope that has been pre-installed on both ends, and a standard metal caribiner. There is no warranty.

The installation instructions assume that you’re using a tree or swingset with no eye bolt or other hardware beyond what comes with the swing. We installed the swing in a tree, and while we do have an eye bolt already in from a previous (different) swing, we decided to go with the instructions in the packaging. 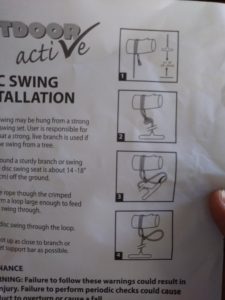 Once we figured this out, installation wasn’t too hard. The key is to thread a loop of rope through the carabiner, then draw the disc through that loop, forming a sort of knot. Once the caribiner is moved up close to the branch or bar, it should be ready to go. 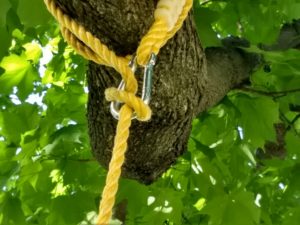 The swing, properly installed. (We think.) (Click to enlarge.)

The swing appears to work well. Properly installed, it rests snugly on the tree branch we’ve got it attached to, and it moves about as well as other disc swings we’ve used in the past. The swing does come with a few warnings, so users are advised to check from time to time that the various parts are in working order. In particular, the instructions warn against using the swing if temperatures drop below 0 degrees Fahrenheit. 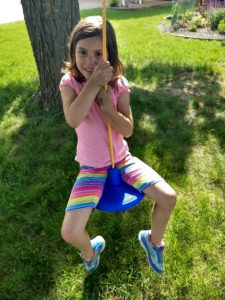 One more thing: the rope is reasonably long, but not excessively so, so if you’re going to install this on a tree more than, say, 15 or 20 feet off the ground, you’ll need to work out a different installation than what’s in the box.

UPDATE (June 2019): We’ve had the disc swing for one year and it has held up pretty well. We are beginning to see some fraying along the rope, both at the bottom and at the top where it connects to the tree, although to be fair, we left it out in the elements all winter. If you take it down when temperatures drop it may do better. Regardless, we think it’s got at least a full season left in it. One other observation: our kids really love this swing, and when the weather is good will go out and swing on it for 20-30 minutes at a time. As far as cheap outdoor entertainment goes, this seems to work well.

UPDATE (September 2020): After two years the rope finally started fraying to the point where we’ve removed and trashed the swing. Keep in mind that we left it out all year, even in the winter — if you were to remove it during the cold months it would probably last longer. However, removing it from our tree was really hard; we had to cut it with a knife because it was so tightly attached to the tree. For that reason, we’re not sure how easy it is to winterize. Still, for a 2-year swing — and the kids used it a lot — the price was cheap.

For about $8, Aldi has a disc swing that should hold up for most kids that might want to use it. Despite the fact that the manual’s illustrations are out of order, installation isn’t too hard once you figure things out, and it works about as well as you would expect a disc swing to. We wish there was a warranty, though.