It wouldn’t be the holidays without certain foods. Candy canes and gingerbread cookies or gingerbread houses come to mind. Another classic treat is egg nog. While not everyone is fond of the creamy, sweet milk-and-egg-based drink, I grew up enjoying it, and I’ve passed that enjoyment on to my kids. I always make sure I pick up at least one container of egg nog at some point during the Christmas season.

Aldi usually sells egg nog, often name-brand Dean’s, but the only thing I could find during a recent Aldi outing was a small jug from Promised Land Dairy. 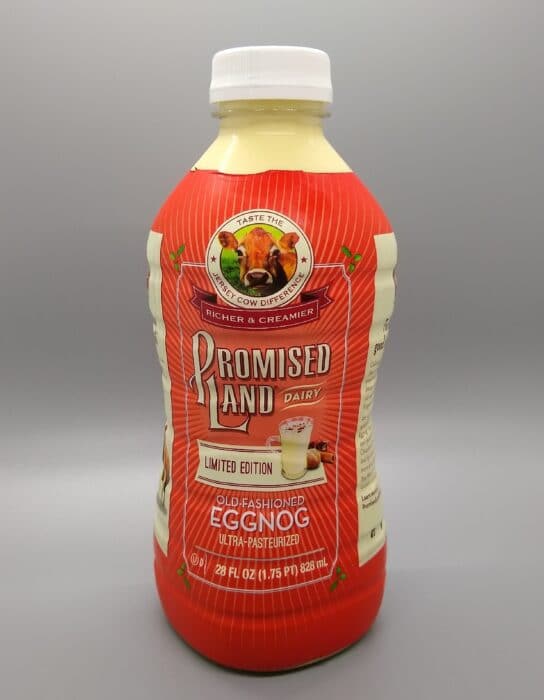 This egg nog is an Aldi Find (Special Buy), which means it’s only in stores for a short time, so if you see it in stores and want some, you’d be wise to buy it right away. If you miss out on it at Aldi, though, you might be able to find it at other grocery stores because Promised Land Dairy products are sold at a few other stores around the U.S.

My household is not a stranger to Promised Land Dairy products. Aldi sometimes sells a delicious chocolate whole milk from this dairy, and the dairy makes other milk flavors that I haven’t yet tried.

Based on our research, Promised Land Dairy is a company based in Dallas, Texas, with its origins on a farm in Floresville, Texas. Promised Land is a subsidiary of Grupo Lala, the only nationwide dairy company in Mexico. Grupo Lala purchased Promised Land in 2009 as part of a large expansion into U.S. markets.

As we’ve written about before regarding Promised Land Dairy products, it’s not easy to pinpoint where the cows that produce their milk are located. The company’s website doesn’t offer any insight, other than to point out that they no longer offer tours. Doing a search for the location only produces an office complex in suburban San Antonio. In 2018, Grupo Lala moved its Floresville operations to a “more modern facility” in Colorado Springs, Colorado. The company also owns a plant in Omaha, Nebraska. It’s difficult to find any information about those plants, though.

Our egg nog bottle states that it was manufactured for Promised Land Dairy in Dallas, Texas. Our bottle also says it was “processed at plant stamped.” However, I couldn’t spot any obvious plant information on the bottle, and in a long-shot effort I entered the numbers on the bottle into Where is my Milk from? and couldn’t find any answers.

With that said, Promised Land Dairy uses milk from Jersey cows, a British breed originating from Jersey in the British Channel Islands. These cows produce milk that has higher amounts of protein, calcium, and flavorful butterfat. Their milk often is praised for its taste, richness, and creaminess, and I’ve seen Aldi fans on social media proclaim their love for Promised Land Dairy products. They really do taste good.

This egg nog is ultra-pasteurized, kosher, and should always be stored in the refrigerator. It’s recommended to consume the egg nog by the date printed on the bottle (which was about three weeks out from the purchase date for me) or within five days after opening. Egg nog never lasts long in my house, especially when it’s such a small bottle as this one, so we’ll have no trouble drinking it quickly. Before pouring it into serving glasses, be sure to shake it well. 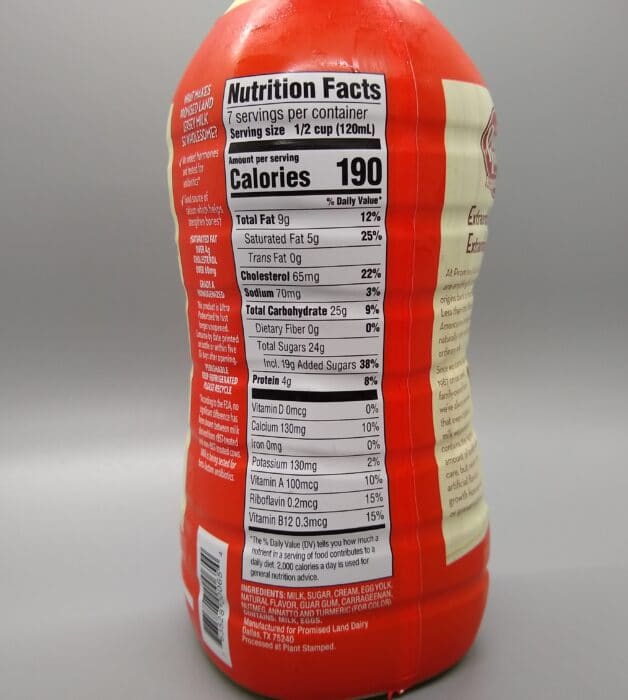 If you’re avoiding allergens, this contains milk and eggs.

Promised Land Dairy Old-Fashioned Egg Nog is a holiday classic produced by a dairy company that uses Jersey cows, whose milk is known for its higher levels calcium and protein, as well as a higher amount of butterfat that offers a rich and creamy flavor. While we wish we knew more about where these dairy products are produced, we don’t deny that they taste good.