One of my favorite easy meals from Aldi is the Kirkwood Chicken Cordon Bleu. It’s sold as individual stuffed, breaded chicken breasts in the Regular Buy freezer section, so I can purchase as many as I need at around $1 each to make dinner for my family. All I have to do is drop them on a baking sheet, set the oven timer, and enjoy some family time while dinner bakes. 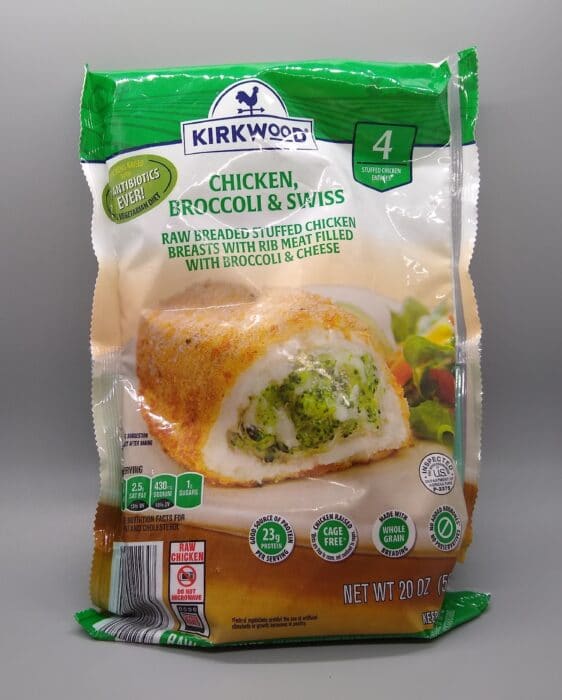 This chicken is an Aldi Find (Special Buy), which means it’s only in stores for a short time.

The package states this chicken was raised on a vegetarian diet, although chickens are by nature omnivores, so a vegetarian diet is not as natural or healthy as it may sound. The bag also says the chicken was raised cage free, although most meat or broiler chickens raised in the U.S. appear to be raised cage free, usually on large barn floors. Egg-laying hens are another matter, as they typically are raised in battery cages.

Cooking directions are for a conventional oven only. To bake these, preheat your oven to 375 degrees Fahrenheit. Remove the frozen entrees from the package and place them on an aluminum baking sheet at least three inches apart on the center rack in the middle of the oven. Bake 1-2 entrees for 38 minutes or bake 3-6 entrees for 40 minutes, or until they reach a minimum internal temperature of 165 degrees. (Insert a meat thermometer at an angle 2 inches into the top center of a chicken breast.)

In terms of allergens, this entree contains milk and wheat. 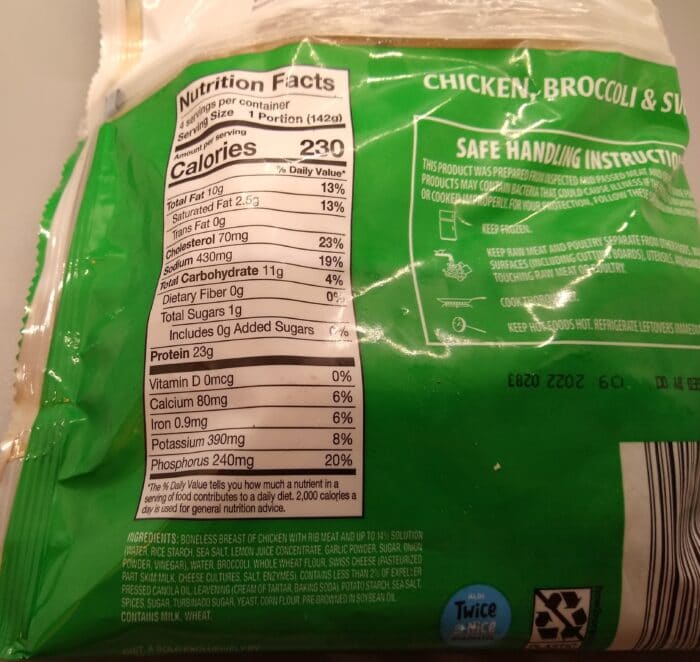 This was easy to make in my oven, and it was definitely done after 40 minutes.

The chicken and breading taste very similar to the chicken cordon bleu we’ve had from Aldi before, with soft chicken and a crisp outer coating, but the stuffing was mostly medium-sized chunks of broccoli and not much cheese. It didn’t help that a small amount of cheese leaked from the entrees while they were baking, but it doesn’t seem like there much was cheese to begin with. My family thought these were okay, and everyone ate them all, but we definitely prefer the heartier, cheesier Regular Buy chicken cordon bleu over these limited-edition broccoli and Swiss chicken breasts.

Kirkwood Chicken, Broccoli & Swiss Raw Breaded Stuffed Chicken Breasts with Rib Meat is a limited-time special that is similar to Aldi’s Regular Buy chicken cordon bleu, with tender chicken and a crisp outer breading. It’s easy to bake and tastes good. It is filled with plenty of soft broccoli, but we found the Swiss cheese to be on the skimpy side, making this more of a chicken and broccoli entree rather than chicken, broccoli, and cheese.