I recently noticed that Aldi is selling Brussels sprouts stalks. The sprouts are still attached to the stalk on which they grew. They may taste more fresh this way, similar to tomatoes sold on the vine. 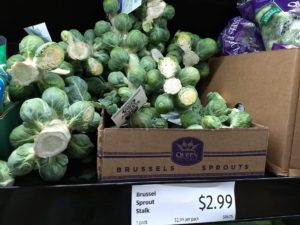 I first saw Brussels sprouts stalks at Trader Joe’s, and they also are available at some other upscale grocery stores like Whole Foods. Aldi’s stalks showed up a few weeks ago in my store. They are $2.99, and a sign stated they are a “new item.” I’m assuming that means they’ll be around for a while and that they are not a limited-time Special Buy (ALDI Find).

Aldi’s Queen Victoria Brussels Sprouts Stalk is a product of the U.S., specifically from California. The stalk is sold without any plastic bags or packaging. It just has a little tag with some cooking directions, which is attached by a rubber band. The tag that comes on the stalk also says you can visit www.qvproduce.com for recipes and information. One of my friends mentioned she appreciates the fact that Aldi’s Brussels sprouts stalk has very little packaging to throw away. It turns out Queen Victoria has a waste reduction program that seeks to impact multiple aspects of the business through strategies including reuse, waste diversion, packaging reductions.

The directions on the tag state the sprouts can be cut from the stalk and prepared as desired, or the stalk can be roasted whole. I opted to roast it whole because I have never done that before and was curious to see how it would turn out. 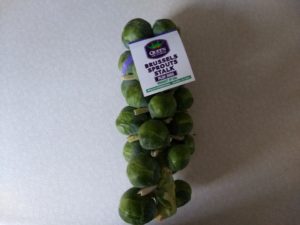 The stalk on my counter, ready to cook. 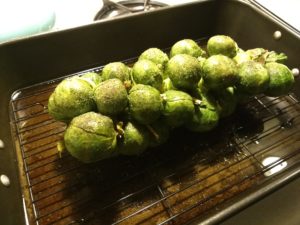 The stalk ready to roast.

To roast the stalk whole, place 2 cups of stock or water in a roasting pan and cover it (I used foil). Then place in the oven for 350 degrees for 20 minutes, allowing the stalk to steam. After 20 minutes, remove the pan from the oven and carefully remove the cover. Mix 1/2 cup of maple syrup and 1/8 cup of olive oil. Brush the syrup mixture over the sprouts, season with salt and pepper, and return to the oven to roast uncovered for about 45 minutes, basting every 15 minutes with the pan drippings, until slightly brown and fully cooked. Place the whole stalk on a platter for serving. 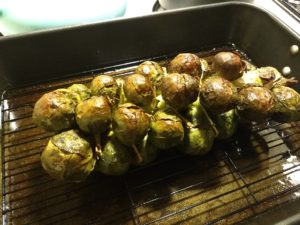 The stalk after roasting.

I ran out of pure maple syrup, so I used half real maple syrup and half of what my family calls the “fake” syrup, which consists of corn syrup with maple flavoring. I typically steam Brussels sprouts and serve them with butter and Parmesan cheese, but my younger daughter, who does not typically like Brussels sprouts, said she liked this recipe a little better because the maple syrup made the sprouts sweeter.

The recipe has a long cook time — an hour and five minutes — so plan accordingly. 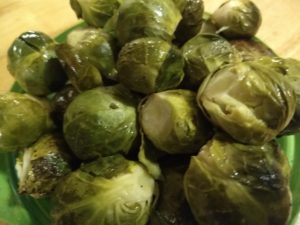 Leftover sprouts after we ate dinner.

We also got a ton of sprouts off this stalk. It was enough to fill a 1.75-quart container. One stalk can feed a family and then some.

Aldi’s Queen Victoria Brussels Sprouts Stalk is a novel way to cook and serve a classic veggie. You can cut the sprouts off the stalk and prepare using your own recipe, or follow the recipe on the card that comes with the stalk. The stalk is worth a look if you like Brussels sprouts.