I noticed last year that Aldi sold some cute little cardboard cat houses during the holiday season. I nearly bought one for my cat, but I’m never sure if my cat will actually use stuff like that. Many cat toys seem to go ignored or forgotten. Because, well, if you have ever owned a cat, you understand. So I passed up the cat house.

But this year, the cat houses are back, and my 10-year-old said, “Mom, we should get one for our cat!” 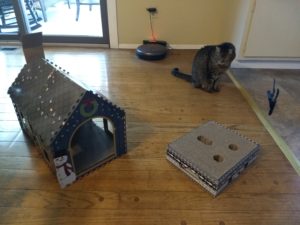 Our cat eyeing her new toys. With our Aldi robotic vacuum in the background because robotic vacuums and cats seem to go together. 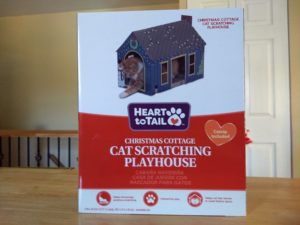 This is probably the most eye-catching of the two cat items in question. It comes in several patterns, including a cottage (which is what I bought), gingerbread house, or Christmas tiki hut. The Christmas patterns mean you may not want this sitting out in a prominent part of your house after the holidays. It would be nice if there were some year-round designs. 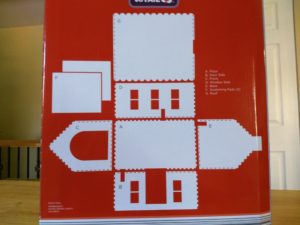 A guide to all the pieces on the back of the box. (Click to enlarge.) 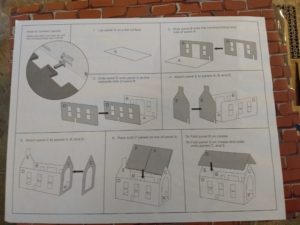 It takes a little bit of time to assemble the playhouse because it is constructed with cardboard tabs that fit into each other. It comes with assembly instructions and a visual chart that shows what pieces go where. It’s not too difficult, other than simply punching out the cardboard tabs, and it takes some patience and careful maneuvering to get everything into place. It is definitely not an easy pop-up kind of thing. Once it’s assembled, you probably won’t want to take it apart for storage because it will wear out the cardboard tabs. So once it’s up, it’s up.

My cat was immediately curious when I opened the box and began assembling her house. She came over to sniff it and stick her head in at various stages of assembly. 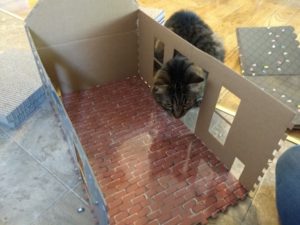 Checking out the half-assembled house.

When I first assembled the house, I thought the chimney was not well designed. It was bendy and didn’t stand up straight. See the picture below: 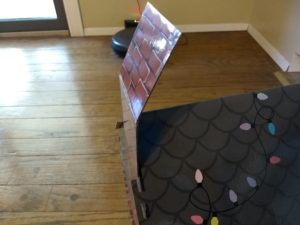 Later, I realized the chimney needed to be folded over and tucked down. That part is not mentioned in the directions. It looks much better now. 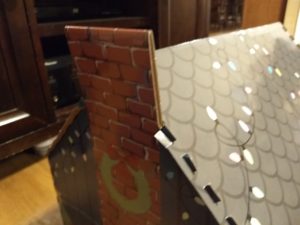 I forgot to place the two scratching pads inside the house before placing the roof on, but I was able to carefully get them through the front door, just barely. You can use the house with or without the scratching pads. It just depends on what you think your cat would prefer. 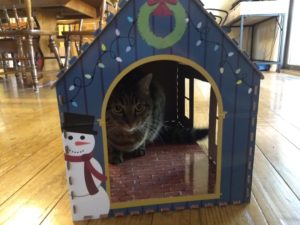 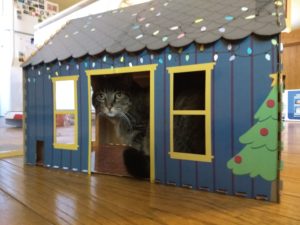 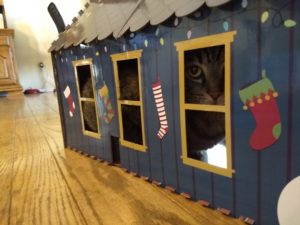 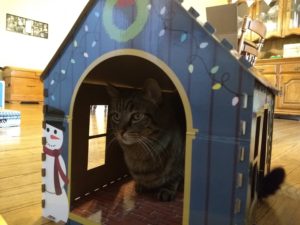 The house has plenty of holes, windows, and doors. Notice the cat tail popping out of the side of the house.

When I finished the house, I called my cat over (she actually came) and she went inside right away and sat down as if she knew she was the rightful owner. She seemed pretty content. I sprinkled a tiny amount of the included catnip on the playhouse floor and she responded accordingly, rolling onto her back and looking slightly intoxicated. This house has lots of windows and holes where you can stick feathers, toys, or fingers (just be careful!) in to play with your cat. 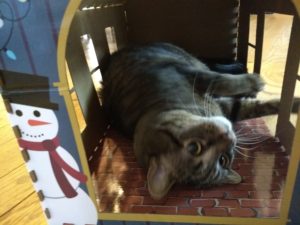 Of course, one never knows if a cat will continue to use a cat toy. She has been sitting and sleeping in it quite a bit, so I’m hoping she will continue to enjoy it. The fact that it’s a box probably helps because most cats seem to love boxes. This seems more likely to be used than our expensive carpet-covered cat condo from the pet store, which our cat never uses. This cardboard house has the added benefit of looking cute.

Because it’s cardboard, and because the tabs where all the walls attach are not the most durable material, I’m not sure how long the house will last. I also noticed that when my cat leaned hard against the sides of the house, which have a crease because they were folded to fit in the box in the store, the walls bowed out a bit and I had to push them back in. Check back later for updates on how the house is holding up. 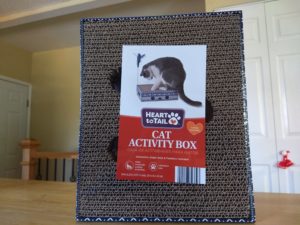 This is actually a pretty cool cat toy. It’s a hollow box with three compartments, with a removable scratching pad on top. The box has several holes on the sides, and the scratching pad has holes as well, so that a cat can reach in or down into the box to bat at three plastic balls with bells that are included. 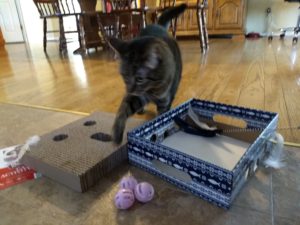 The box disassembled. The scratching pad fits on top, and balls go inside. (Click to enlarge.) 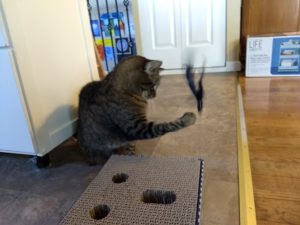 Playing with the feather toy.

There’s also a feather toy on a spring. This can be tucked into a corner or side of the activity box, or you can take it off and wave it with your hand for your cat to play with. One feather was already off the feather toy upon opening the box, and we lost two other feathers within the first minute of cat play, so we’ll see how that holds up. In general, even feather toys from name-brand pet stores don’t always last long in the grips of enthusiastic cat paws. 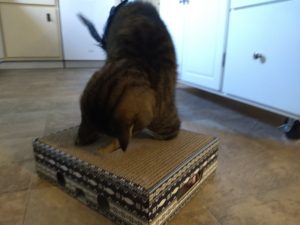 She stuck her paw through a hole to bat at a ball inside the box. 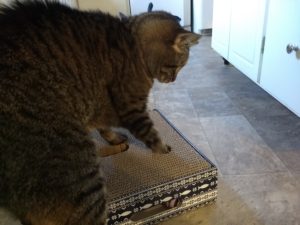 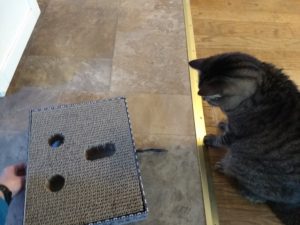 I stuck the feather toy stick in a hole on one end, and it popped out a hole on the other side, much to my cat’s fascination.

Overall, this toy seems to be well designed and offers multiple ways for my cat to play. It is getting more use from my senior citizen cat (she’s 12.5 years old) than I anticipated. When I removed it from the package, she came over right away and scratched on the scratching pad. Also, my cat often simply sits on top of the activity box. I guess she views it as a nice perch. 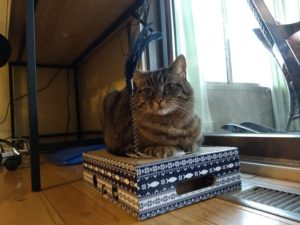 Update: A month and a half after I purchased the Heart to Tail Cat Activity Box, it broke. My cat was sitting on it, as she often does, and the top scratching pad/platform suddenly snapped into two pieces. My cat weighs about 10 pounds, so she is around the average weight for a cat. Perhaps the box was not built with the intention that a cat would frequently just sit on top of it. Apparently, it cannot handle being sat upon long-term by an average-sized cat. I super glued the pieces back together, but they never felt very sturdy, so eventually I took out the supports inside the box so the scratching pad lies flat in the bottom of the box. It’s less of an activity box now and is just a box for my cat to sit in. 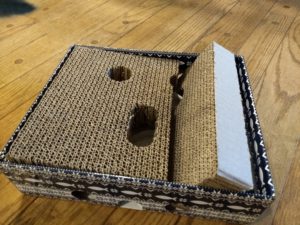 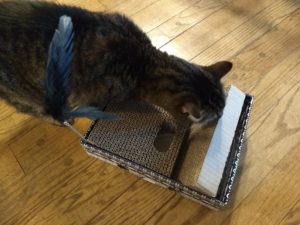 My cat wondering what went wrong.

Aldi’s Special Buy (ALDI Find) Heart to Tail Cat Scratching Playhouse and Cat Activity Box are cute and fun for feline friends, and humans will appreciate the fun designs on the playhouse. So far my cat likes and uses both products. The scratching pad top surface of the Cat Activity Box broke into two pieces a month and a half after I purchased it, so now it’s just a box for my cat to sit in and not much of an activity box. Here’s to hoping my cat continues to actually use these products, because you never know with cats.