EDITOR’S NOTE: Read our review of the Aldi version of Girl Scout Tagalongs or Peanut Butter Patties here. You can also read our review of Benton’s Mint Striped Fudge Cookies, which are similar to Thin Mints and were available at Aldi for a short time only during the spring of 2021, here.

If you’ve shopped at Aldi for any length of time, you’ve probably noticed the grocer does not hesitate to make adjustments to its inventory from time to time. Aldi is constantly introducing new products, while also giving the boot to other products for various reasons.

Sometimes products disappear for reasons that aren’t clear. That is the case with the Benton’s Fudge Mint Cookies, which were a dead ringer for Girl Scout Thin Mint cookies. As of late 2019 to early 2020, Aldi no longer sells the Fudge Mint Cookies. 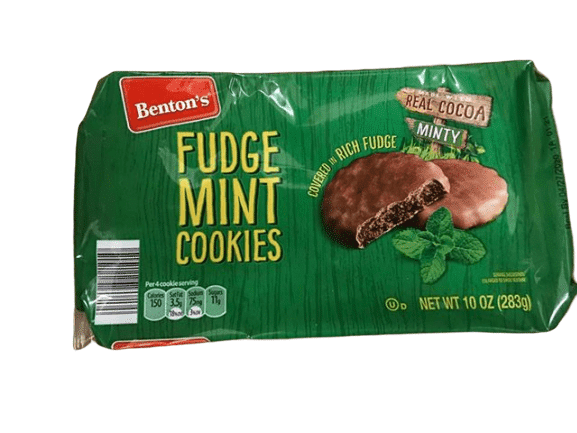 We were first clued in that something was up in late 2019, when a reader asked us what happened to the Benton’s Fudge Mint Cookies. They were still on our local store shelves at the time, so we didn’t worry yet but simply kept an eye on the cookies. Sometimes stores will sell out of a certain product and there is a delay in restocking for unknown reasons, causing a temporary and localized shortage.

But then in January of 2020, we noticed the Fudge Mint Cookies were missing from our local stores. I reached out to Aldi via their contact page and asked what had happened to the cookies. I received this response:

The item in which you are inquiring has been discontinued and is no longer available. However, your feedback is very important to us and has been forwarded to the ALDI Buying Team for review.

Aldi did not say why it pulled the Fudge Mint Cookies from store shelves, so I reached out to them again and specifically asked if they could tell me why the cookies were pulled. They responded promptly with the same message, simply stating they had been discontinued and offering no reason.

So we don’t know why the cookies are gone. We’re not sure if the reason was poor sales (although we can hardly imagine Thin Mint knockoffs not selling well, considering how Thin Mints are the number one, most popular Girl Scout cookie), or possibly the reason was quality issues, an issue with the supplier, or something else all together.

What we do know is that the case of the disappearing cookies has resulted in some disappointed Aldi shoppers.

If you’re still craving Thin Mints, you can get them from your local Girl Scouts, or you can purchase other knockoff versions such as Keebler Grasshopper cookies at most major grocery stores. Retailers such as Walmart, Dollar General, and Dollar Tree even carry their own reasonably priced imitations of Thin Mints.