EDITOR’S NOTE: Read about Aldi’s other dishwashing products here, including liquid soap for hand washing along with gel detergent for the dishwasher.

I’ve written before about Aldi’s dish washing products, ranging from liquid soap for hand washing the dishes to powder and gel detergents for dishwashing machines. (We strongly recommend staying away from the gel detergent, by the way, because it leaves a residue on dishes.) Aldi likes to tweak its products from time to time, and during a recent shopping trip I noticed Aldi has changed its house brand powder pacs for use in dishwashers. 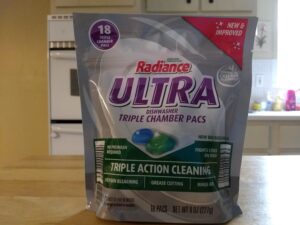 The new Radiance Ultra Dishwasher Triple Chamber Pacs showed up in my local Aldi stores during the late summer of 2019. The new pacs are $3.49 for an 8-oz. package of 18 pacs at the time of publication. That comes out to about 19.3 cents per load.

They replace Radiance Premium Dishwasher Powder Pacs. According to our records, in 2018, the old dishwasher pacs were $2.49 for a bag of just over 12 ounces that contained 20 pacs, which came out to about 12 cents per load.

That makes these new dishwasher pacs $1 more per package and almost 7 cents more expensive per load.

Whether they’re worth the price increase, I don’t know.

They are visibly different from their predecessors, though, mainly because they contain liquid components in addition to the powder. The pac is divided into three sections, with the largest section containing the traditional white powder. Two smaller sections contain blue liquid and green liquid. The old pacs contained only the powder. 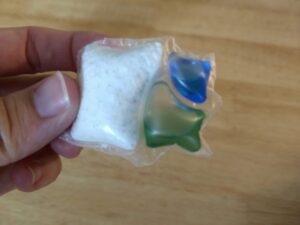 The package for the new pacs states they use a “new bio based formula” and are comparable to name brand Cascade Platinum. 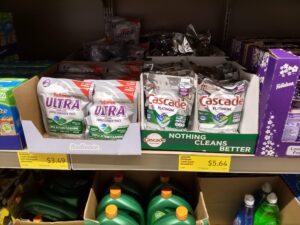 Radiance Ultra Dishwasher Triple Chamber Pacs on the left and Cascade Platinum on the right. (Click to enlarge.)

The newly revamped Radiance pacs boast that they provide oxygen bleaching, grease cutting, and a rinse aid with “triple action cleaning.” The package says no prewash is required.

The package also has a symbol indicating the dishwasher pacs are kosher certified through the Kashruth Council of Canada.

You use the pacs like you would any dishwasher pac: handle with dry hands and do not puncture the pouch or unwrap it. Use one pouch per load. Place the pouch in the main dispenser cup and close it. Reseal the bag after each use and store in a cool, dry place.

I’ve used Aldi’s new pacs in my dishwasher several times now, and all seems to be well.

On a related note, I’ve seen some anecdotal conversations on social media about dishwasher pods damaging dishwashers, possibly because the plastic membrane that contains the detergent may not fully dissolve and may clog the dishwasher or drain. Roto-Rooter says, however, that they haven’t seen anything to indicate dishwasher or laundry pods regularly cause clogged drains. If anything, Roto-Rooter states that if the plastic membrane does not fully dissolve, you’re more likely to see your dishwasher’s filter screen get clogged, but undissolved pacs are unlikely to pass through the filter screen and into household plumbing drains. Also, you should be cleaning your dishwasher’s filter screen on a regular basis anyway to remove food particles, or anything else that might accumulate there. It’s an easy task and will ensure your dishwasher functions efficiently and gets your dishes as clean as possible.

I’ve never found undissolved pacs in my dishwasher’s filter screen, and my dishwasher manual recommends using the pacs over other forms of detergent, so I’ll stick with them for now.

Aldi has revamped its Radiance brand dishwasher pacs. The new Radiance Ultra Dishwasher Triple Chamber Pacs look fancy with blue and green liquid compartments in addition to the powder compartment. The new pacs cost more per load, and each package contains fewer pacs than before, but they’re still the cheapest dishwasher pacs around even compared to buying a bulk name brand package from a big box store. Whether they’re worth the price hike is uncertain at this time.