My husband and I love Indian food, but we live on a budget and can’t always eat at restaurants. When we crave Indian food, we are mostly relegated to preparing meals at home with products from an international grocery store with an unreliable stock, from the small selection of offerings from Target, or from Aldi when it rolls out certain Special Buys. We even recently tried frozen Indian meals from Trader Joe’s, which is Aldi’s upscale cousin, and we were not impressed.

No store-bought Indian food so far has been as good as the food we get at restaurants, but we continue to try new things when we discover them.

Today we’ll look at an array of Regular Buys.

One note before we begin: at the store, another woman who was shopping asked an employee if the Indian entrees in the freezer were very spicy. I couldn’t help chiming in and mentioned most Indian food I buy from grocery stores isn’t too spicy. At most, it has a little kick. Restaurant food tends to be much more spicy, depending on the chef. After having sampled those foods from Aldi now, I can say that nothing is overly spicy, except the Special Buy Specially Selected Jalfrezi Curry Sauce.

On to the specifics: 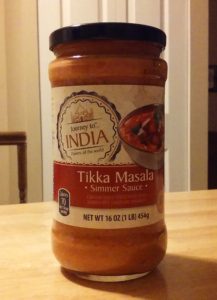 This was a Special Buy product that recently became a Regular Buy. In my store, it’s found with a few other ethnic sauces near the ketchup and salad dressings. This is a 16-ounce jar containing a “medium spiced tomato-based sauce blended with ginger and coriander.”

The directions say to heat oil in a saute pan, add salt- and pepper-seasoned chicken (I use 1 to 2 chicken breasts, depending on how saucy I want the meal to be) and brown evenly. Then add green and red peppers and the whole jar of sauce. Cover the pan and simmer over low heat for 10 to 12 minutes until chicken is thoroughly cooked. Serve with basmati rice.

I used pre-cooked chicken, didn’t add peppers, and I only heated the sauce until it began bubbling so all the liquid didn’t cook off; I like my Indian food to have a lot of sauce.

This is our favorite Aldi Indian sauce. It has good flavor, the right amount of spice (but not too spicy), and tasted a lot more like restaurant sauce than almost any other store-bought sauce we’ve purchased, in or out of Aldi. I initially regretted that I only bought one jar because it was a limited-time Special Buy, but now that it’s a Regular Buy item I’m happy I can buy it whenever I want to at Aldi.

Journey to India Flavors of the World Korma Simmer Sauce 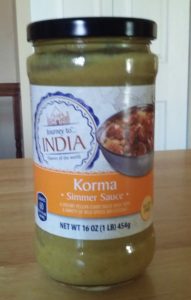 This is a new Regular Buy at Aldi, sold in the condiments section of the store alongside the Tikka Masala Simmer Sauce mentioned directly above. The Korma Simmer Sauce is “a creamy yellow curry sauce made with a variety of mild spices and coconut.”

To prepare, heat oil in a saute pan, season chicken with salt and pepper and brown evenly in hot oil. Add onions and other vegetables along with the jar of simmer sauce. Cover pan and simmer over low heat for 10-12 minutes until chicken is cooked through. Enjoy with rice.

I used pre-cooked chicken and did not add vegetables. The jar does not indicate how much chicken to use, but I use 1 to 2 chicken breasts, depending on how saucy I want the meal to be. This sauce has a decent mild flavor, and tastes fine, but the Tikka Masala Simmer Sauce is more flavorful, tastes more authentic, and remains the winner in my book.

Journey to India Flavors of the World Jalfrezi Simmer Sauce 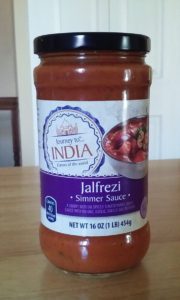 This recently showed up as a new Regular Buy at my local Aldi, sold alongside the above-mentioned Tikka Masala and Korma simmer sauces. It is “a smoky medium spiced tomato puree curry sauce with onions, garlic, ginger and peppers.”

It prepares similar to the other simmer sauces: heat oil in a saute pan, season chicken with salt and pepper and brown evenly in hot oil. Add onions and other veggies along with the entire jar of sauce. Cover the pan and simmer over low heat for 10-12 minutes until chicken is cooked through. Enjoy with rice.

As I did with the other simmer sauces mentioned above, I used two pre-cooked chicken breasts and did not add vegetables.

I had never never tried Jalfrezi sauce before, so I don’t have a standard to which I can compare it, but this was quite good. It has some small chunks of tomato and diced peppers in it and has good flavor but is not too spicy. Of all the Journey to India simmer sauces Aldi sells, the Tikka Masala tastes best, followed by the Jalfrezi, and then the Korma. 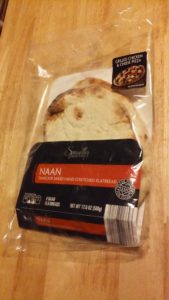 Aldi’s naan comes in regular or garlic flavors (my family prefers regular), is pretty authentic, and is a Regular Buy item. It arrives at the store frozen. I know this because I’ve picked it up off the bakery section shelf while still frozen. Each package comes with four slabs of bread, and each piece of bread serves one to two people, depending on how hungry you are. The bread warms easily on a baking sheet for two to three minutes at 400 degrees in the oven, and you can scoop up tikka masala or buttered chicken with chunks of bread for a good meal. It even comes with instructions for making little pizzas if Indian food isn’t your thing.

Outside of sauces, Aldi’s Regular Buy naan tastes authentic and is worth purchasing, and the Regular Buy basmati rice is also good.