Predictably, the clothes we’ve seen rotate out in the fall tend to be in anticipation of colder weather, including slippers and pajama pants. 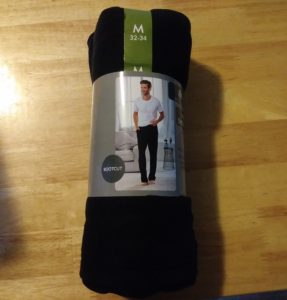 The Royal Class Men’s Sweat Pant, which retails this year for $9.99, boasts an elastic waist with a drawstring, two side pockets, and a single back pocket with a zipper. The pants are composed of 80% cotton and 20% polyester. According to the packaging, they were made in Bangladesh and are certified “Standard 100” by OEKO-TEK, which tests for harmful substances in textiles. The instructions call for machine washing with cold water with like colors, then tumbling dry on low.

In addition, the sweat pants were available in either black or blue, and either bootcut or gathered ankle. The stores we looked at only offered the blue in the XL size; since I’m a medium, I was stuck with black. I did have some choice of the cut, though, so I went with the bootcut.

A couple of observations. One, they’re comfortable. I wouldn’t say they’re overly thick, but they’re not thin, either, and they’ve got a fairly soft inside material.

Two, whether the length is right will depend on how tall you are. The mediums I wore had a 32-inch inseam, in addition to a pretty generous crotch area (about 16 inches from the top of the waist to the crotch) so they were a little on the long side for me, as I typically wear a 30-inch inseam. So just be aware of that, especially since you can’t try them on in the store.

Finally, and it’s a small thing, but the zipper pocket worked out better than I thought it would. The zipper itself opens and closes easily and the zipper folds under a small layer of fabric, so it’s unobtrusive.

The Royal Class Men’s Pant is a comfortable pair of sweatpants for a decent price. Just be mindful that, at least with the mediums, they run about as long as they do wide.