What’s Different When You Visit a Brand-New Aldi Store

We’re fortunate to live in a large metropolitan area with several Aldi stores within 15-20 minutes of our house. A brand-new Aldi store recently opened nearby, and my husband and I, being Aldi nerds, trekked out to check it out. We really liked some parts of the new store, and we had mixed feelings about other things we saw. Here are a few things to expect in a shiny new Aldi store. 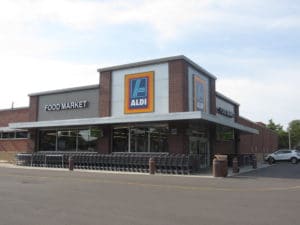 1. A bigger building with wider aisles.

The new store in our area is more spacious. The aisles are wide enough to alleviate cart traffic jams that happen during busy times. The cut-through aisles that serve as shortcuts between the main aisles are also wider. In the older stores, you can only fit one cart at a time through those cut-through aisles. At our new store, the shortcut aisles are wide enough for about three carts. The wider aisles throughout the store also mean it’s easier to backtrack if you forget something. You know how frustrating it can be to schlep back to the first aisle for something you missed? Our new store has three wide spaces that provide access to that first aisle: one in the front of the store, one in the middle, and one at the back. Yes, please. 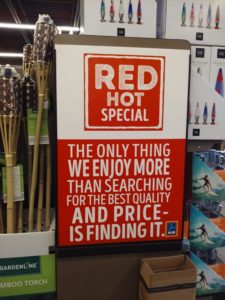 2. A setup that is more similar to traditional grocery stores. 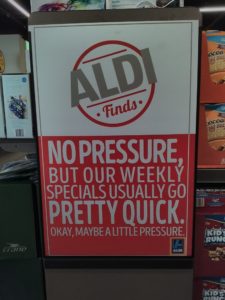 3. Products that are not in their usual locations.

Aldi has always had a basic, predictable formula for its store layout, and I was lost in the new store because it’s laid out in a completely different way. The salad dressing is on an end cap in the second aisle instead of at the end of the first aisle. The soda is in the last aisle instead of the second aisle. The produce is at the rear right of the store instead of the rear center. Cereal is in the third aisle instead of the first. The new store throws my old expectations about where things are located out the window. It’s a good thing the aisles are wider so I can easily backtrack when I can’t find something. Even after visiting my new store six or so times, I still have to search for some things. An Aldi employee I chatted with said people especially tend to miss things placed on end caps, so if you’re in a new store and having trouble finding a product, check the end caps.

4. Similar products not grouped together on one shelf.

This was a little frustrating to me. For example, in the new store, half of the chips and snack foods are stocked at the beginning of the first aisle, where they usually are in most Aldi stores. But at the end of the second aisle, we found more chips — tortilla chips, Doritos, and Pringles — there with Mexican food like taco shells and taco seasoning.

I also saw strawberries in three different places and cherries and grapes in two places in the fresh produce section, for no identifiable reason. 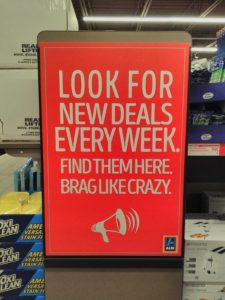 The newer stores have dedicated, clearly labelled freezer and refrigerator sections just for Special Buys (Aldi Finds), and our new store has one entire (large) aisle dedicated to all other Special Buy items. We saw a lot of older Special Buys that are harder to find in other smaller Aldi stores. It seems like the larger stores serve as clearinghouses for this merchandise, and that’s great for all of us who look forward to these limited-time products. 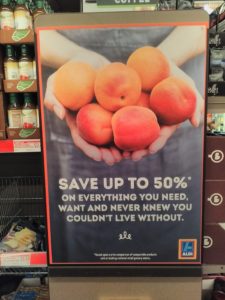 How about you? Have any new Aldi stores opened in your area? How are they different? What do you like or dislike about them?