EDITOR’S NOTE: As of 2019 these shrimp are now being sold under the new Aldi private label, Fremont Fish Market. They otherwise appear to be the same product, though. 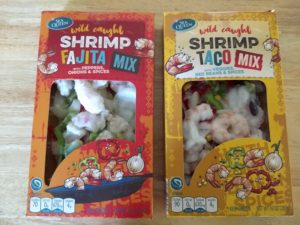 There is little difference between the ingredients for the shrimp fajitas and the shrimp tacos. Both packages contain shrimp, red and green bell peppers, onions, and garlic. The taco mix also contains red beans and corn. The fajita mix contains Tex-Mex spices but doesn’t elaborate on what those are.

You must purchase soft tortillas and any taco toppings such as salsa, cheese, sour cream, etc. separately. 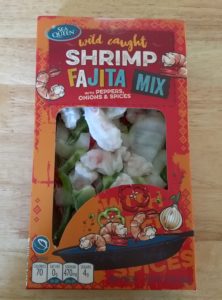 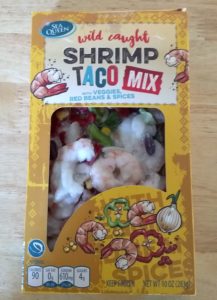 When my husband and I prepared and ate these fajitas and tacos, we noted two things. First, the amount of food in each package is tiny. Each package claims to have two servings, but that’s only if you consider one soft taco or one fajita to be one serving, because there was only enough in each package to fill exactly two medium-sized flour tortillas. It is more accurate to say one package contains one serving, which would give one person two tacos or two fajitas.

The other thing my husband and I noted was that it would be pretty easy to make these from scratch using shrimp, fresh veggies (and some canned beans and canned or frozen corn in the case of the tacos), and some simple spices. The spice packets for the tacos and the fajitas are a mixture of cumin, cayenne, paprika, pepper, and oregano.

For both the fajitas and the tacos, the instructions say to keep frozen until you’re ready to prepare the meals, and then to cook from frozen, but they also say if the mix is defrosted to keep it refrigerated and use it within 24 hours. After preparing these myself, I recommend allowing them to thaw in the fridge before cooking because it will speed up the cooking process. It’s not easy to evenly stir fry frozen clumps of veggies and shrimp.

To cook, you basically do a stir fry. The shrimp are raw, so be sure to cook them thoroughly. In a non-stick pan, heat two tablespoons of frying oil. Open the tray and remove the packet of spices from the bottom of the tray, then add the frozen product (minus spice packet) to the pan. Stir fry the mix for 3-5 minutes (we found it took a few minutes longer than that when cooking from frozen). Sprinkle the spices, to taste, from the enclosed packet and mix well with the stir fried shrimp and veggies, cooking for one additional minute. I used half of the spice packet, which made fairly mild fajitas and tacos that I hoped would appeal more to my kids. You can use the entire spice packet if you want your food to have more kick.

Aldi’s Sea Queen Wild Caught Shrimp Fajita Mix and Sea Queen Wild Caught Shrimp Taco Mix taste great. However, they are pricey for the small portions you get. I recommend making shrimp fajitas and shrimp tacos from scratch to save money and get larger serving sizes. The ingredients are pretty basic, and all you need are shrimp, diced peppers and onions, garlic, and some seasonings such as cumin, cayenne, and pepper.