Lasagna is not a health food. It’s high in calories and carbs. So I have to give props to attempts to add some nutrition to the popular comfort dish. Perhaps it’s still not the healthiest meal out there, but it’s better. 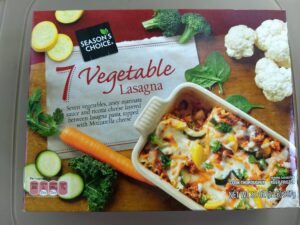 Aldi offers its own attempt at a healthier lasagna with its Season’s Choice 7 Vegetable Lasagna. It sold for $6.49 for a 32-oz. box at the time of publication. It’s an ALDI Find (Special Buy), which means it’s only in stores for a short time. I bought the veggie lasagna during Aldi’s Italian week. 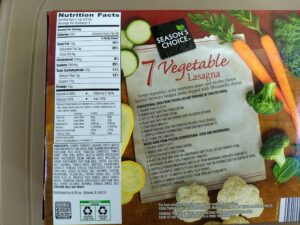 The ingredients list is filled with mostly identifiable foods such as pasta, tomatoes, cheese, broccoli, cauliflower, carrots, zucchini, mushrooms, bell peppers, kale, garlic, and spinach. Also, I’m not sure what “7” vegetables the dish’s name refers to because I count at least eight, although spinach is so far down the ingredients list that perhaps they aren’t counting it.

It does include sugar, and while the nutrition information states there are 11 grams of sugar per serving, it’s not clear how much is natural sugar occurring in fruits such as tomatoes and how much is added sugar. 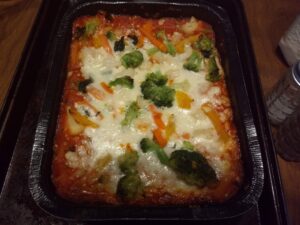 To bake in a conventional oven (do not use a toaster oven), preheat the oven to 375 degrees. Remove the heat-safe lasagna tray from the carton and cut a slit in the film to vent steam.

Place the heat-safe tray on a cooking sheet in the center of the oven. Cook for 50 minutes.

Remove the film and cook for 5 minutes or until fully cooked. Carefully remove cooking sheet from the oven using oven mitts. Let lasagna stand for 2 minutes.

To “micro-bake,” which uses both the microwave and a conventional oven, preheat the oven to 375 degrees. Remove the heat-safe lasagna tray from the carton and cut a slit in the film to vent steam.

Place the heat-safe tray on a microwave-safe plate. (Do not remove film.) Microwave on high (100% power) for 7 minutes.

Carefully remove microwave-safe plate from microwave with oven mitts and carefully place the heat-safe tray on a cooking sheet in the center of the oven.

I baked our lasagna in the oven (no microwaving). It required an extra five minutes of baking to reach an internal temperature of 165 degrees, but needing extra bake time beyond what the directions indicate is common when I am preparing frozen lasagnas.

This veggie lasagna was surprisingly good. It was closer to a traditional lasagna than I expected. My middle schooler took one bite and declared she loved it. It has lots of thick noodles (yeah, it’s not a health food), flavorful sauce, and good amounts of ricotta and Mozzarella cheeses. I noticed several bites of broccoli and cauliflower on top of the lasagna, and while vegetables definitely have a presence in this dish, I thought they were in just the right amounts. I still felt like I was eating an indulgent meal, just with veggies thrown in.

The whole lasagna tray is on the small side, with each person in my family of four getting one modest-sized serving. That ensured that none of us overate, but it’s a good idea to offer some side dishes like salad with this meal to round things out.

Aldi’s Season’s Choice 7 Vegetable Lasagna is a traditional meatless lasagna with noodles, marinara sauce, and cheese, but it stands out because it has veggies like broccoli, cauliflower, zucchini, and peppers mixed in. It tasted better than I anticipated for being loaded with good-for-you vegetables. Don’t make the mistake of assuming this is a health food, because it still has lots of carb-laden pasta, but at least you’re getting a serving of vegetables at the same time. We only wish the package was a little larger so we could have seconds.