EDITOR’S NOTE: We have a companion post on alternatives to this cooler. You can read it here.

Special thanks to Dave for helping us in testing this cooler.

If you’ve done any serious outdoor adventuring, there’s a chance you may have heard of YETI. They’re a company that specializes in a number of products … none more famous than their coolers, which claim to be as indestructible as they are insulated. They’re also really expensive, a fact known to polarize the types of people interested in YETI coolers.

By contrast, you don’t think of Aldi — which, like YETI, stylizes themselves in all caps — as the go-to place for hardcore outdoorspeople, although Aldi certainly doesn’t lack for, say, camping equipment or accessories. So imagine our shock to see Aldi stock a high performance hard sided cooler: as in, the kind of cooler that’s made for multi-day kayaking trips or keeping food out of the hands of bears.

It certainly tries. The Adventuridge cooler is a pretty shameless take on a YETI Roadie 20, from the color scheme right down to much of the design. 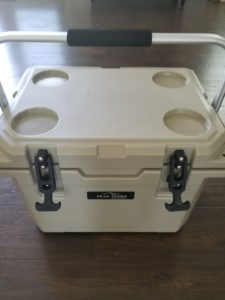 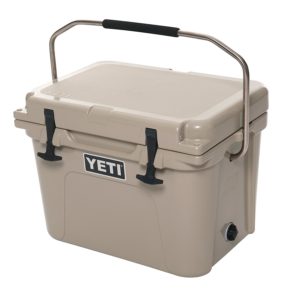 … and the YETI cooler. (See a resemblance?)

The Adventuridge cooler is, like the Roadie 20, a 20-liter cooler. It retails for $79.99; that makes it a lot less than the $199 you’d pay for a comparable YETI, and close in price to the $86 Ozark Trail High Performance Cooler sold by Walmart. (More on how the Adventuridge compares to the Ozark Trail model later on.) The Adventuridge claims to be good for 18 cans + ice and boasts “commercial grade insulation that keeps ice for days.” It is backed by a 5-year warranty. 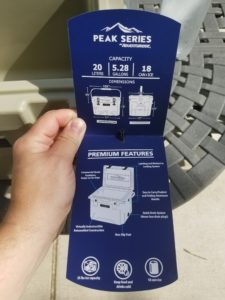 Our tester noted several positives with the Adventuridge. One, it feels like a well-made cooler. It’s durable, and the surface and the handle seem like they are engineered to last. Our tester felt like this cooler has the potential to be in his rotation for a long time.

Two, it’s surprisingly large for what he expected. The tag says it fits 18 cans, but our tester had no problem fitting 24 cans plus ice. Because bottles are bigger, only about 18-20 bottles will fit with ice, but bottles can be stood straight up and down for packing purposes; our tester was able to put 20-ounce aluminum beer bottles upright in the cooler and still was able to close and lock the cooler. 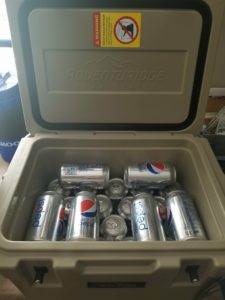 Three, it’s well designed, for the most part. The rubber latches are comparable to a YETI, the seal-tight lid does a great job of keeping contents in the cooler even if it tips over, and it has two holes where you can fasten a padlock to the cooler if you need to keep animals out of it. Keep in mind, though, that the seal between the lid and the body is not continuous, so if the cooler is left in a tipped position for a long time you will probably see some minor leakage. 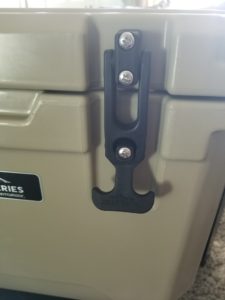 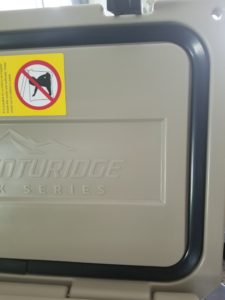 The lid seal. Note the small gap in the seal at the bottom left. (Click to enlarge.) 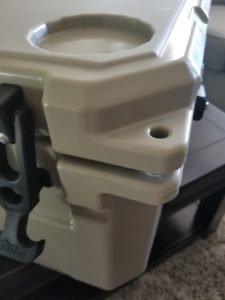 One of the holes for locking the cooler. (Click to enlarge.)

In particular, our tester loved the drain plug design. The plug is large, so it drains quickly, and it is also threaded like a screw so it won’t accidentally come open the way some other coolers (i.e. some Coleman coolers) can. It’s also rigged in such a way that you can’t lose the plug. 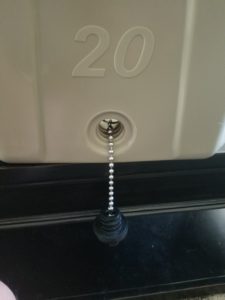 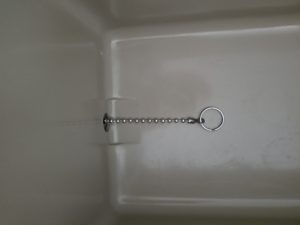 On the bottom, the non-slip feet are great for keeping the cooler in place, which can be especially valuable for activities like boating. At one point, our tester set the cooler on the trunk of his car — which has a decent curve — and it didn’t slide off, or scratch the car. 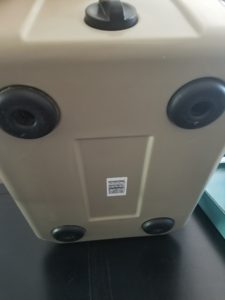 Also of note: the oversize cup holders molded on the lid are great because you can fit the large stainless steel can coolies that are very popular now. This is in contrast to many standard coolers, where the cup holders are not big enough to fit those types of can coolies. 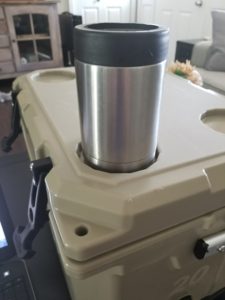 Our tester noticed a few negatives with the cooler. One is the handle design. The padded grip is great, and the aluminum handle is durable, but rotating the handle is very difficult because of the way it’s designed to lock between two molded notches. Our tester reported that both his wife and his grade school-aged son had trouble getting the handle to and from the upright position. Even for our tester, it’s a two-hand effort and takes some force. It may get easier over time as the notches wear down, but that may also create problems as the notches wear down. 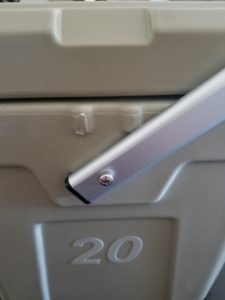 The notches in the center of the cooler. Note the left one is starting to show a little wear. (Click to enlarge.)

The cooler can become unbalanced when empty. If the handle is in the rear position and nothing is inside the cooler, it causes the cooler to tip backward. Obviously, this is a pain for packing. The fix is to put the handle in the front position, but that also requires a little foresight … and means that you have to move it across both notches if you need to get it from back to front. Also, when the handle is in the front, it blocks the latches, so you have to push it back to the center position before you can latch it. 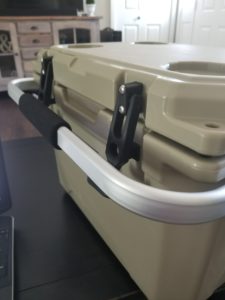 The handle up front. It blocks the latch unless it’s moved. (Click to enlarge.)

Our tester put the Adventuridge cooler through a few paces. One was a simple 24-hour ice test. He placed a 2-liter bottle of ice in the cooler for one day to see how it fared. It was a hot day: 80-90 degrees Fahrenheit, with the cooler in a mix of sun, partial sun, and darkness (during the night).

Here’s the before and after: 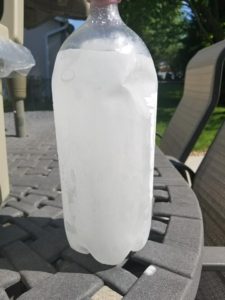 Ice at the start. 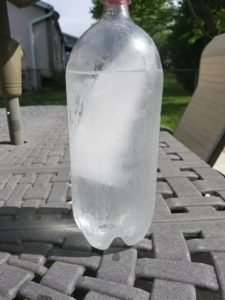 Ice at the end.

The first test wasn’t quite “ice for days.” While there was ice in the bottle after 24 hours, it was about 70% water.

Our tester also took the cooler with him on a weekend camping trip. The cooler kept beers and soda cold all day in 90 degree weather, with some of the ice melted.

Overall, he felt like cooling ability was fine — not really spectacular, but adequate.

How it Compares to an Ozark Trail Cooler:

Our tester was able to do some comparison between the Adventuridge and another budget cooler, the $86 Ozark Trail High Performance Cooler sold by Walmart that I mentioned earlier. 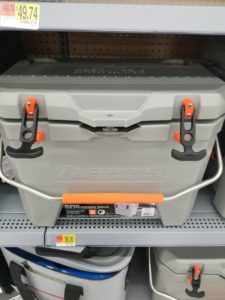 There are a few differences between the Adventuridge and the Ozark Trail. In the Ozark Trail cooler’s favor, it is a little larger (26 quarts to 20 quarts), doesn’t have the same balance issues when the handle is in the back, has a molded ruler on the lid for fish measuring, and has a handy metal bottle opener built into the locking part of the cooler. In the Adventuridge cooler’s favor, it has more oversized cup holders than the Ozark Trail (4 to 2) and has more spots to lock the cooler (2 to 1).

Overall, our tester felt like the Adventuridge Peak Series High Performance Hard Sided Cooler was a solid cooler as far as budget coolers go. He was able to get his when it was discounted down to $50, which he felt was a good value. He’s not quite as certain, though, whether this is something he’d want to pay the full $80 for, especially given that there are other budget coolers at that price point that may have more features. Still, he generally felt good about his purchase and felt like, for a budget cooler, it’s worth a look.