If you’re a connoisseur of onion rings — and maybe some of you are — you know that the side item can be made using a variety of methods. It can be baked or fried, battered in different ways (including with beer), and filled with chopped onion or whole onion. Restaurants and grocery stores alike vary in what kinds of onion rings they serve.

Aldi has Regular Buy onion rings, but that’s not what these are. 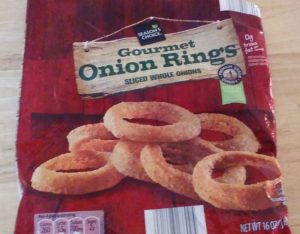 The Season’s Choice Gourmet Onion Rings differ from the standard Aldi onion rings in two respects. One, they are a Special Buy, appearing at sporadic times throughout the year. Two, they contain whole onions, as opposed to the chopped onions present in the standard Aldi onion rings. It’s a matter of taste whether you prefer chopped over whole; chopped are probably a little easier to eat, but we think the majority of onion ring aficionados (and most restaurants) prefer the whole ones.

There are two methods for cooking on the package: oven baking and deep frying. The first option is to bake the onion rings at 425 degrees for 15 minutes, turning them at the halfway point. The second option is to fry them in a deep fryer at 350 degrees for 2 to 3 minutes. Since we didn’t have a deep fryer at the time when this post was written — and we figure most of you don’t, either — we went with the baking method.

These aren’t beer battered or anything exotic like that, so the breading was the typical stuff that we all recognize. It had some seasoning to it; we’ve had onion rings before that required salt, but these didn’t. The breading was crisp, too, which was a positive since we’ve had our share of limp onion rings before. And the onion itself on the inside was a whole onion. This last point has one negative in that you can easily pull the entire onion out of the batter in one bite if you’re not careful, but onion ring pros should already be experienced at knowing how to bite down on the onion ring so that such a misfortune doesn’t happen.

We wish they had more exotic batter, but despite that quibble, these are pretty good onion rings: easy to cook, crisp, and with a whole onion inside. At only a couple of dollars a bag, the Season’s Choice Gourmet Onion Rings are a nice little side item. Recommended.