It’s no secret that, in recent years, Aldi has been moving toward stocking more healthy offerings on its shelves. At the same time, Aldi’s processed frozen foods remain popular. This leaves Aldi in a situation of trying to stock a little bit of everything, from fresh produce, vegan dishes, and keto-friendly foods to microwaveable finger foods. (This is also a challenge for Aldi’s distant cousin, Trader Joe’s.)

Aldi is no stranger to appetizers, be it mozzarella cheese sticks, southwestern rolls, or onion rings. We’ve come to expect that Aldi will roll out a mix of Regular Buy and ALDI Find (Special Buy) bites throughout the year, including around major events.

We stumbled upon Mama Cozzi’s Cheese Filled Pub Pretzels during the middle of September, a time you don’t exactly associate with big parties. Instead, these appetizers seem to be all about ushering in fall. 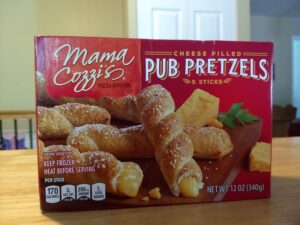 The Aldi cheese filled pub pretzels are an ALDI Find, meaning they’re only in stores for a short time. They’re $2.49 for a box of 5 pretzels, or about 50 cents a pretzel. We’re used to paying a little more for premade appetizers like this one, so the price isn’t too bad. I also think the pretzels are large enough that it’s not a bad price, although these aren’t going to be enough to make for a whole meal. They’re appetizers, after all.

Making them is easy, although limited. Ideally, you’ll want to use an oven, preheating it to 425 degrees, placing the sticks on a cookie sheet, and baking them for 10 minutes. Oddly, there are no other cooking instructions — not even microwave — so if you don’t have an oven, or at least a toaster oven, you’re out of luck.

Before eating, you can apply salt from a salt packet to the pretzels. We found that the salt packet contained a lot more salt than we needed, but having too much available is probably better than having too little. Just be careful not to go overboard.

I’ve found Aldi appetizers to sometimes be hit-or-miss, but our family really liked these pretzels. They’re crisp and salty on the outside, and cheesy on the inside. They also have just a bit of jalapeno pepper on the inside, which gives some bites a tiny bit of kick and gives the whole package a richer flavor.

To no one’s surprise, these aren’t healthy. They have some fat, but where they’re really high is carbs (23 grams per pretzel) and sodium (1300 mg per salted pretzel). The sodium is especially bad, as each stick has about 58% of your recommended daily amount. That’s bad news if you’re on a diet that restricts sodium, but even if you’re not, these are unquestionably a sometimes food. 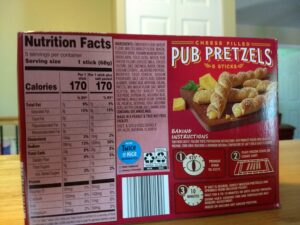 As appetizers go, these are good. The taste and texture are both solid, and they make for a great party food. They’re worth a look if you see them in stock.