EDITOR’S NOTE: Updated February 2019 with a few follow-up details about our warranty experience.

We’ve written before about warranties on products sold at Aldi. Because Aldi sells products from a variety of different brands with different suppliers and manufacturers, warranty service for those products can be uneven, depending on what company you’re dealing with.

I had a different experience with Aldi’s SOHL Furniture Writing Desk recently. My issue took about three months to resolve.

I purchased a SOHL Furniture Writing Desk in early March of this year from Aldi. It was a great bargain at just $59.99. I knew I wouldn’t be getting heirloom-quality furniture. I simply wanted an affordable work space for my home office.

Right out of the box, the wooden portion of the desk had a few small dents. I didn’t want to return the desk to the store and get another because it’s a heavy, bulky piece of furniture to haul, and I had no guarantee that another desk would not have similar small defects. The largest and most noticeable dent was on the front of a drawer, and my husband and I thought that if we could get a replacement drawer front from the supplier, it would be a simple process to unscrew the dented one and swap it out. The desk has a two-year warranty, so what could go wrong? 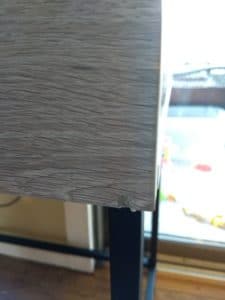 One example of some of the damage. (Click to enlarge.)

One note: among the people I contacted, at no time did I tell any of them that I was a blogger or that I wrote for a website on Aldi products. As far as they knew, I was just an ordinary consumer.

A Timeline of Events:

March 14, 2018: My first action was to email the manufacturer. The box and manual gave an email address: [email protected] (More on this company later.) I sent the first email on March 14, and it stated:

“I purchased a SOHL Furniture Writing Desk from Aldi on March 8th, and upon opening the box, one of the drawer facades had a noticeable dent. I am writing to ask if a replacement drawer front can be mailed to me, as it would be a simple process to swap out the damaged drawer front. If this is possible, I can send my mailing address. Thank you for your help.”

I received no response.

March 26, 2018: My next action was to call the phone number listed on the box and manual. My first call on March 26 went straight to voicemail. I left a message explaining my problem and gave my phone number for someone to call me back. The caller ID app on my phone showed that I had called “Mailbox Rentals.”

March 29, 2018: When I received no call back, I called again a few days later, on March 29. That time, a recorded message informed me that the mailbox was full. I couldn’t speak to anyone, and I could not leave a voicemail. It did leave an option to send an SMS notification or text message, and I did so, and a recording told me “Thanks for using T-Mobile Voicemail” before ending my call.

For good measure, I sent a second email similar to my first on March 29 and also provided my mailing address with the distant hope that someone might send me the replacement part even if no one responded directly to my emails and calls.

No one returned any of my emails, voicemails, or texts.

April 2-3, 2018: Aldi itself generally has very good customer service, and I wanted to give Aldi an opportunity to make things right, so late in the afternoon on April 2, I contacted Aldi through its website to let them know about my experience with their supplier. They emailed me the next morning, April 3, saying they had forwarded my comments directly to the manufacturer, and if I didn’t get a response from the manufacturer within five business days to contact Aldi customer service, and they provided a phone number.

April 13, 2018: Ten days later, I received a call around 6 p.m. on Friday, April 13, from an unknown New York number. I let it go to voicemail, as I usually do with unfamiliar numbers. The caller left a voicemail, in a difficult-to-understand Indian accent, stating he was “Sam” from Fulfillment Services USA and he was calling about a desk I had purchased that had a small dent. He left me a number to call, which happened to be the same customer service number I had already called multiple times. I called that number immediately and was directed to voicemail, but I didn’t leave a message. I then called the New York number that “Sam” had called me from to see what might happen. That also went to voicemail and I left no message, but my phone’s caller ID app told me I had just called “Samuel UPS Store.”

April 17, 2018: I called the Fulfillment Services USA customer service number again on April 17 and was informed the mailbox was full again. When prompted to send an SMS message (a text message), I did so.

April 23, 2018: I called Aldi’s customer service number that they provided when they responded to my email from early April informing them about my difficulties contacting the supplier.

When the line picked up, I had two options: I could press a number to hear about the availability of recent Special Buy (ALDI Find) products in stores, or I could stay on the line to speak with a customer service representative. I stayed on the line, and I provided a brief explanation along with my case number I received in my email from Aldi to the woman who answered.

I was promptly transferred to a customer service rep, and she politely asked if she could put me on hold so she could review my case. While I was on hold (for a minute or less), I listened to some Aldi facts and fun little reminders about bringing my quarter when I go shopping.

When the representative came back on the line, she told me it looked like the manufacturer had not tried to contact me after I contacted Aldi. I told her they called after Aldi reached out, but the call had gone to my voicemail, and when I tried to call again, their voicemail box was full. She said the manufacturer was supposed to let Aldi know when they attempted contact with me, but that had not happened. She said Aldi would reach out again via email to the manufacturer to inform them that they needed to contact me again and that they needed to give me a way to reach them, and she advised me to give it a few days. I thanked her, told her I appreciated Aldi’s good customer service, and we ended the call.

May 21, 2018: Almost a month to the day after I last spoke with Aldi, Fulfillment Services USA called me and said Aldi told them I had an issue with their desk. I explained my problem and asked if a replacement drawer front could be shipped. The caller (I didn’t catch whether it was Sam again) said they were out of desks and replacement parts and it would be several months before they would get more, but in the meantime he said they could offer me compensation of half of my purchase price and later could send a replacement part.

He confirmed my mailing address he had received from Aldi (Aldi’s contact page asks for this information, so I assume they passed it along to Fulfillment Services USA) and confirmed my name so the check could be made out to me. I purchased the desk for $59.99, so I should be getting a check for $29.99 or $30.00. He said it might take 10-13 business days for the check to arrive, but it would “assuredly” reach me. He was polite throughout the entire conversation and I thanked him for his help.

Along the way, we did a little digging to find out who the company providing the warranty actually is. 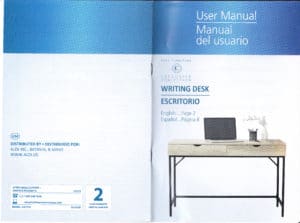 The manual cover, including sales support information. (Click to enlarge.)

The company is called Fulfillment Services USA, although the company website also uses the name Mailbox Rentals USA. The company lists an address along Madison Avenue in New York (just a few blocks from the Empire State Building) and claims to offer a range of services, including mailbox services, notary services, and, of course, fulfillment services. The website lists the same email and phone number as the Aldi desk’s manual, touting “24/7” availability by phone. We’re not sure if a direct-to-voicemail cell phone number that frequently has a full voicemail box counts as 24/7 availability.

To put it politely, this seems like a lean operation.

One more thing: I must emphasize that Aldi’s customer service has been helpful and prompt the whole time. I expected them to be helpful based on past experiences I’ve had and based on what I’ve heard from other customers, and they were. However, both of us — Aldi customer support and I — have had difficulty getting a response from Fulfillment Services. I never received replacement parts for my desk, but I consider my issue to be resolved because Fulfillment Services sent me a compensation check in the mail for just over half the amount of my purchase price.

Aldi has excellent customer service when you deal directly with the company. When it comes to Aldi products that have warranties, you deal with third parties, and you could end up with great service or with something less than ideal. It was a months-long process resolving my issue with the SOHL Furniture Writing Desk regarding the dent on the front of one of its drawers, mostly because the supplier, Fulfillment Services USA, was difficult to reach via various forms of communication (email, phone calls, texts) and slow to respond to requests for communication. My issue was settled about three months after I purchased the desk when Fulfillment Services USA sent me a check for compensation in the mail. Fulfillment Services also offered to send me replacement parts when they became available, but I have not heard from them again, nor have I attempted to contact them.