Skip to content
Home News Is Aldi Or Trader Joe’s Affected By the Romaine Lettuce Scare?

Is Aldi Or Trader Joe’s Affected By the Romaine Lettuce Scare?

UPDATE (11/22/19): For the second consecutive Thanksgiving season — and for at least the third time in two years — the CDC has issued a warning over an E. Coli outbreak in romaine lettuce. We’ll update this post as needed, but here’s what we know as of now:

UPDATE (11/27/18): The CDC issued a new warning two days before Thanksgiving 2018, documenting an outbreak of E. Coli in romaine lettuce. This is the second E. Coli scare of 2018, just seven months after the first one. We’ll periodically update this story as we learn more, but here’s what we know as of now:

On April 10, 2018, the Centers for Disease Control issued a press release related to an outbreak of E. coli bacteria in romaine lettuce. Specifically, the outbreak stems from romaine from the Yuma, Arizona, region. Since then, the CDC has expanded their investigation. At press time, the CDC has identified 53 cases (and 31 hospitalizations) in 16 states, and that number could increase over time. The CDC is advising the following:

Unless the source of the product is known, consumers anywhere in the United States who have any store-bought romaine lettuce at home should not eat it and should throw it away, even if some of it was eaten and no one has gotten sick. Product labels often do not identify growing regions; so, throw out any romaine lettuce if you’re uncertain about where it was grown. This includes whole heads and hearts of romaine, chopped romaine, and salads and salad mixes containing romaine lettuce. If you do not know if the lettuce is romaine, do not eat it and throw it away.

Up to 90% of romaine lettuce sold in the United States comes from California and Arizona, so if consumers have romaine lettuce in their home, it is very possible that it came from the affected area. The CDC has not been able to trace the outbreak to any specific grower, supplier, distributor, or brand, and is telling consumers “do not buy or eat romaine lettuce at a grocery store or restaurant unless you can confirm it is not from the Yuma, Arizona, growing region.”

Aldi has not commented publicly on the situation on social media or on its website. Because this is technically not a “recall” — in a recall consumers are advised to return the product to stores, and in this case the CDC is advising consumers to throw it away instead — Aldi does not have anything on its recall page. It also has not said anything on its press page. That said, Aldi’s produce suppliers can vary depending on the region, so it’s very possible some, or even many, Aldi stores drew from the affected growing areas.

Update (4/26): April 26, we saw these notices posted near the lettuce and at the front doors: 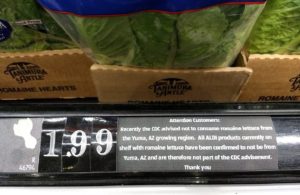 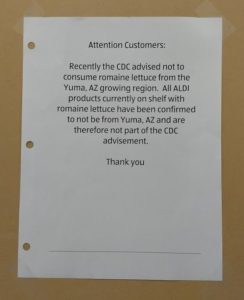 Both of the photos above state:

The supplier of romaine at our local Aldi stores is Tanimura & Antle, which has several locations in California, one in Tennessee, and one in Yuma, Arizona. Tanimura & Antle’s website advises consumers not to eat romaine from the Yuma region and states: “Due to the fact we cannot know inventories at each store, please contact the store where you purchased your lettuce, with date of purchase, to find out where your specific product was grown.”

One very important note: the notices we saw at Aldi referred only to products currently on the shelf, and not things previously on the shelf. If you purchased romaine from Aldi in April 2018, be sure it was from a store with a notice certifying that it was safe.

Trader Joe’s, Aldi’s distant cousin, has not commented publicly on the scare. Trader Joe’s does not currently have any social media presence, and the news section on the Trader Joe’s website makes no mention of the romaine story. Individual stores may have have information regarding their current on-the-shelf romaine.

Be sure to check the labeling on your Aldi or Trader Joe’s romaine. If it says product of Arizona or does not list an origin location, throw it away. If you found it at an Aldi or Trader Joe’s that clearly stated that it did not come from Yuma, Arizona, then it should be safe. However, if you have any doubts, the CDC encourages consumers to err on the side of safety.