My family sometimes visits a Mexican restaurant in our area. The food is fantastic, from the homemade salsa to the delightful sopapillas. In between are a range of excellent entrees. Everyone in my family has a particular favorite on the menu.

Mine is a specific kind of steak chimichanga that the restaurant sells. It’s good for a lot of reasons — the steak, the tortilla, the cheese — but one thing that really makes it work is the bed of grilled vegetables that it’s served on. The vegetables pair perfectly with the chimi’s carbs and protein to make for a complete lunch or dinner experience.

Sautéing or grilling up vegetables isn’t hard, but it does take a little bit of foresight. You have to buy the components you need, chop them up, and then get them on your heated surface. (Not to mention the fact that you need to cook fresh veggies before they go bad.) Sometimes you can start to whip up grilled veggies only to realize you’re out of onions, or peppers, or whatever else you need. That’s when a premade vegetable mix can be a lifesaver.

Aldi recently took to selling a couple of varieties of grilled vegetable mixes. We decided to try them out. 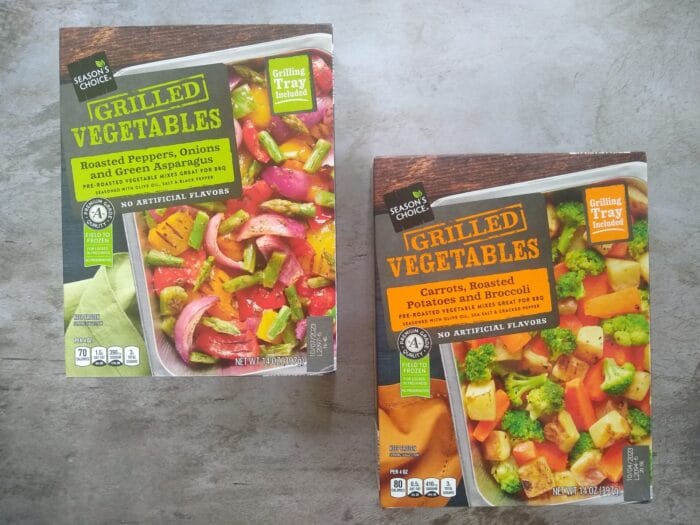 Season’s Choice Grilled Vegetables are an Aldi Seasonal Item. That means they are only found in stores during certain times of the year, but they are replenished until that season is over. In this case, these grilled veggies appear to be a summertime product at Aldi. At the time of this post, each package was 14 ounces and cost $3.69, or about 26 cents an ounce.

Both varieties we picked up had the same instructions. You can cook these either on the grill or in the oven.

To cook on the grill, preheat the grill to 450 degrees. Next, remove the tray from the outer box and remove the lidding film from the tray. Then, place the tray containing the frozen vegetables on the grill. Grill for 20-25 minutes or until desired browning occurs, stirring occasionally.

To cook in the oven, preheat the oven to 460 degrees. (The instructions say “fan, 460,” which we believe implies a convection oven, but we used a conventional oven.) Then, remove the tray from the outer box and remove the lidding film from the tray. Next, place the frozen tray in the middle of the preheated oven. Cook for 25 minutes.

In both cases, the instructions say to cook as needed for the vegetables to reach a temperature of 165 degrees.

We decided to cook one of them in a conventional oven and the other on a grill. 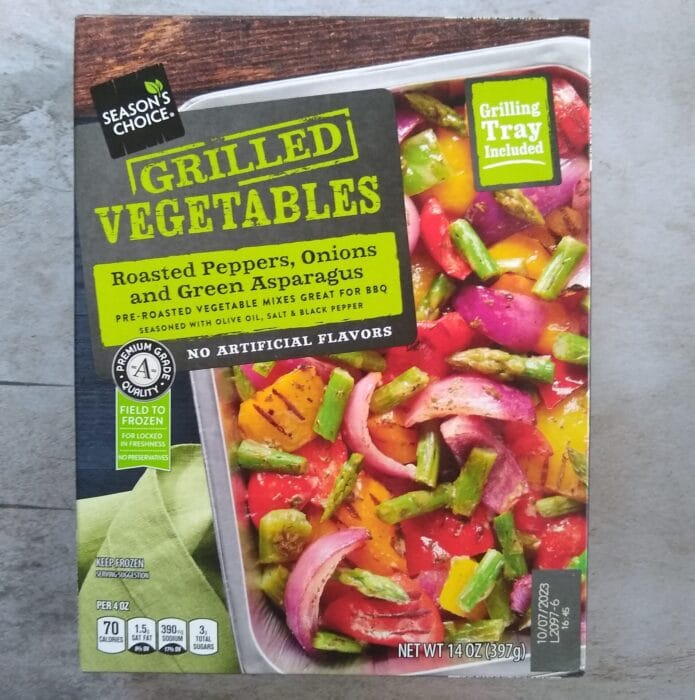 We cooked these in the oven for 25 minutes, stirring occasionally. 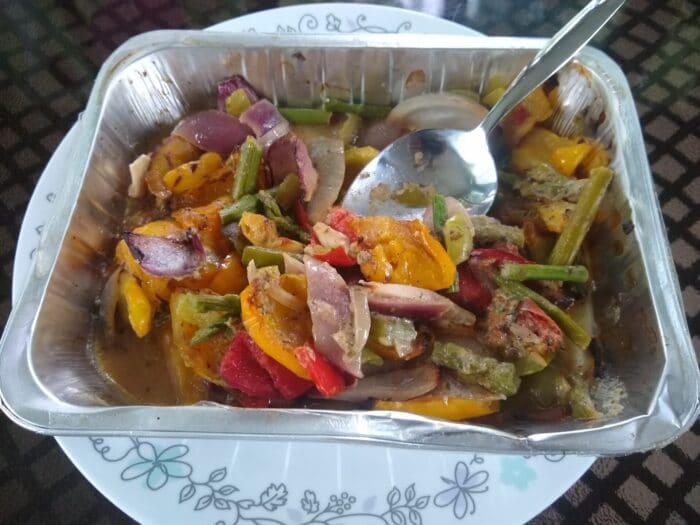 Roasted Peppers, Onions, and Green Asparagus out of a conventional oven. (Click to enlarge.)

We thought they came out okay in the oven, although not great. The texture was a little soft, probably owing to the fact that they were cooked from frozen in the oven, but the taste was fine. The onions, peppers, and asparagus all tasted about like expected. They’re not as good as if we made them ourselves, but they do have a bit of cheese seasoning/sauce that makes them interesting. They taste fine on their own but would pair especially well with a grilled steak or chicken breast.

Nutritionally, these have a lot of sodium and some fat. The allergen disclosure warns that these contain milk and may contain wheat, egg, fish, crustacean shellfish, soy, sesame, pine nut, coconut, and chestnut. 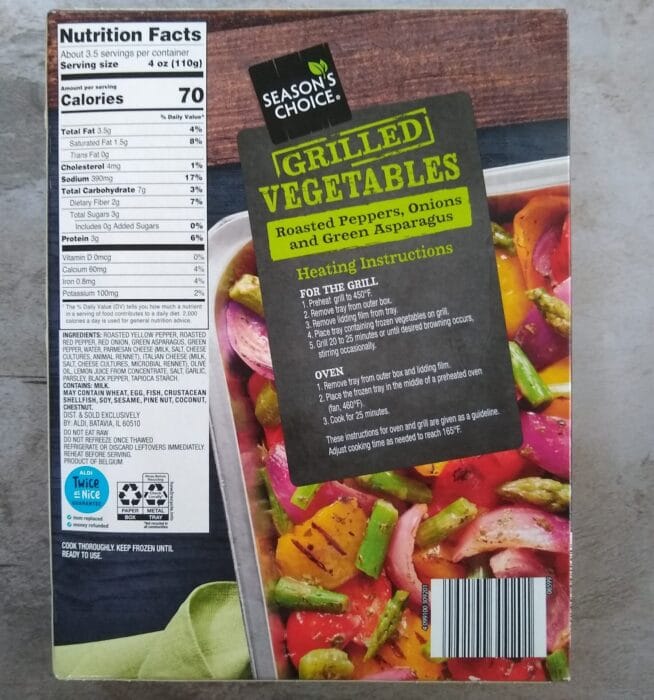 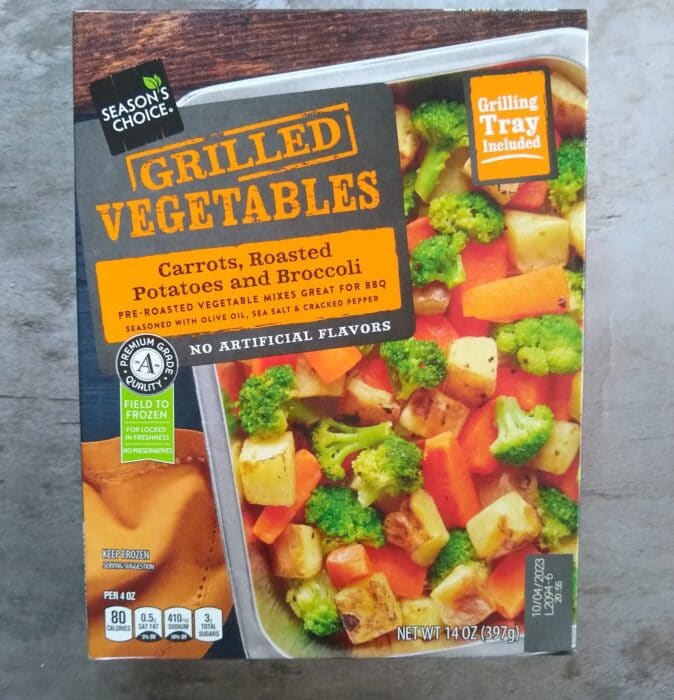 We decided to mix things up by cooking these over a grill on high heat. 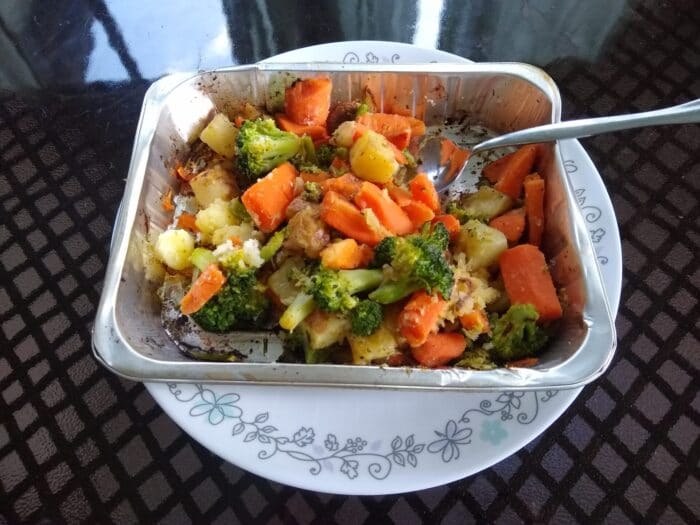 Carrots, roasted potatoes, broccoli from the grill. (Click to enlarge.)

Perhaps not surprisingly, this tray came out much better on the grill and had a good smoky flavor. It was hot and ready in about 20 minutes, and the veggies had a better, firmer texture than the oven-baked ones did. I did have to stir them a little more frequently toward the end to avoid scorching them on the bottom of the tray. These don’t have a cheese sauce like the other grilled veggies, and their consistency is a little drier but fine.

In terms of nutrition, these are similar to the other package. They have a fair amount of sodium and some fat. The allergen list is identical, too, warning that these contain milk and may contain wheat, egg, fish, crustacean shellfish, soy, sesame, pine nut, coconut, and chestnut. 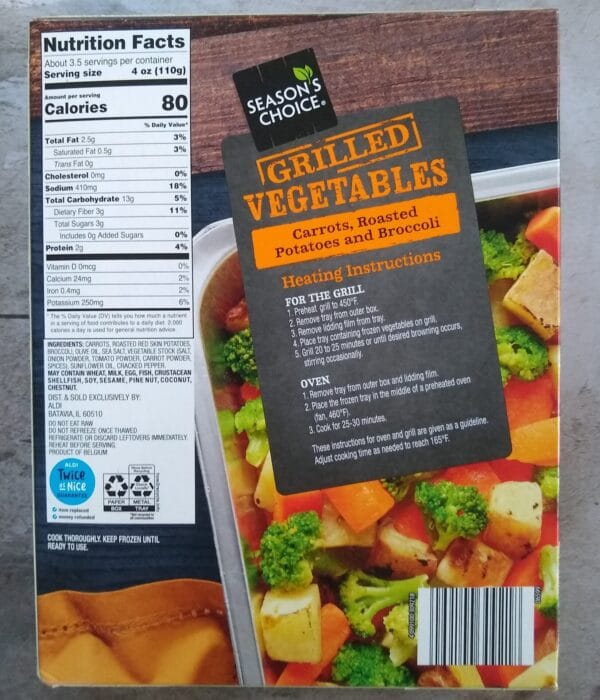 Season’s Choice Grilled Vegetables offer an option to get veggies in a more convenient way than if you made them yourself. Based on our tests, we recommend using a grill if possible, as the vegetables come out better that way. Just make sure to keep an eye on them, especially toward the end.