Oil is an essential part of our family’s pantry. While we sometimes use oil for dressings — extra virgin olive oil is one option there — we more often use oil for cooking, such as when we saute vegetables in the skillet. The most straightforward, and cheapest, option in cooking instances is vegetable oil, which Aldi sells under its Carlini label.

For those who want to experiment, Aldi also sells a few alternatives. One of them is avocado oil. 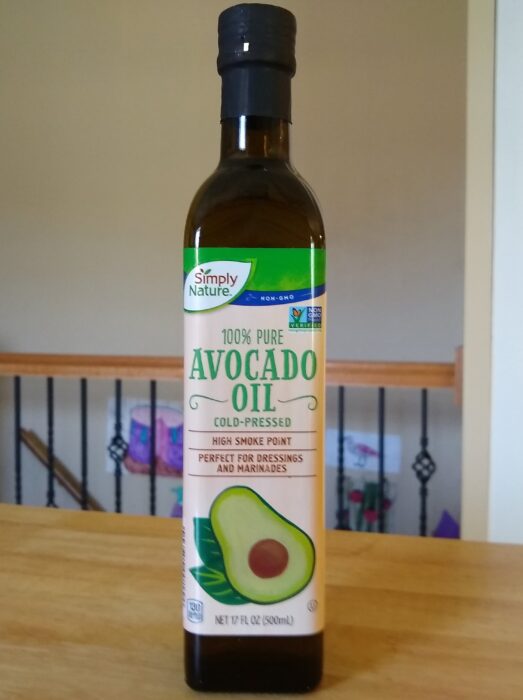 Simply Nature Avocado Oil is a Regular Buy, which means you can find it in stores all the time. The bottle boasts that it is certified non-GMO. The oil, the label says, is a product of the USA, Mexico, or Spain.

Aldi’s avocado oil costs $6.99 for 17 ounces, or 41 cents an ounce. That’s about 10 times as expensive as Carlini Vegetable Oil and more than twice the cost of Carlini Olive Oil. It’s also currently more per ounce than Walmart’s Great Value Avocado Oil, which is 29 cents an ounce, although that oil isn’t marketed as non-GMO. Still, Aldi’s oil is cheaper than most other avocado oils I found online.

There are multiple kinds of avocado oil, depending on how it is pressed and whether or not it is refined. This avacado oil is cold-pressed, meaning it is pressed mechanically rather than other methods such as heat and chemicals. The bottle does not indicate whether it is refined or not.

The smoke point issue deserves particular attention. Smoke point is a measure of how much heat an oil can take; the higher the smoke point, the better it is for things like sauteing and grilling. An oil that is smoking not only can change flavor, but it can also break down in a way that is less healthy for the body. For that reason, a high smoke point is useful if you plan to heat the oil high, such as in a skillet, wok, or fryer.

This avocado oil most likely has a smoke point between 480 and 520 degrees. For comparison, our Carlini Vegetable Oil is made from soybean oil, which as a smoke point of 450 degrees, while peanut oil is also 450 and refined olive oil is 465. In short, this cold-pressed avocado oil would seem to be a good option for higher heat applications.

Because avocado oil is generally more expensive, the question is: how healthy is it? There is evidence that avocado oil has several health benefits, although some of those benefits are in common with some other oils, depending on the function. In addition, some people also swear by avocado oil for skin care, although I haven’t tried that. 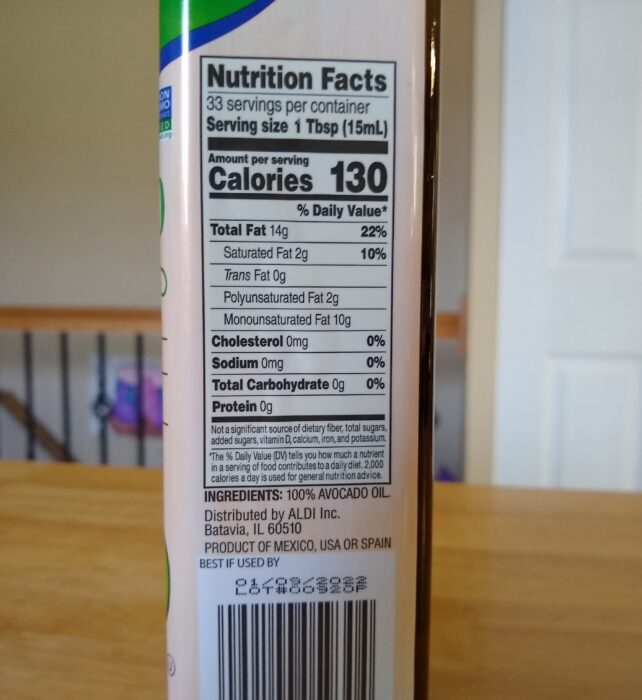 One other note: the avocado oil has a pretty neutral flavor, at least to me. So if you’re looking for something that won’t interfere too much with the food you’re making it with, this is a good choice.

If you’re in the market for avocado oil, Aldi carries it. It’s expensive compared to other oils, but is also a good high heat oil. If you need avocado oil and you’re a regular Aldi shopper, this isn’t a bad option.