One of the small but important parts of cooking is making sure what you cook doesn’t stick to what you’re cooking it on. Not only does getting food stuck to the cooking surface make flipping and removing the food a pain, but it also can lead to food burning … to say nothing of the chore it creates for cleaning up afterward.

Adding a layer of something slick to a cooking surface is often a good idea. This is essential with surfaces that don’t naturally keep things slick, like cast iron, but it’s even true of surfaces that have a nonstick layer, like Teflon-coated skillets.

Butter or oil are common options for greasing a surface. However, cooking sprays also have a following. The history of cooking sprays dates back to at least the 1960s, when PAM was first introduced into the market. PAM was an aerosol-based spray that could be used to lubricate a surface, and it boasted being easier and potentially healthier, as it typically used less oil than pouring oil by hand.

Carlini Original Canola Spray and Carlini Olive Oil Cooking Spray are both Regular Buys, meaning you can find them in stores every day. They both cost $1.49 at the time of this post. The original spray comes in a 6-ounce can while the olive oil spray comes in a 5-ounce can, making the olive oil the more expensive of the two per ounce: 29.8 cents per ounce versus 24.9 cents per ounce, or a difference of close to 5 cents an ounce. Both cost significantly less than the brand-name counterparts and are about the same as or maybe a little less than the generic cooking sprays I’ve seen at my local grocer or at Walmart.

Canola oil and olive oil are similar in a number of ways, although there are some differences. One important cooking difference is that canola oil has a higher smoke point than olive oil, making it a somewhat better oil for cooking, especially when high heat is involved and especially when the olive oil is extra virgin, which the Aldi spray olive oil is. So if you’re using the oil on a skillet or grill, canola might be the better option. 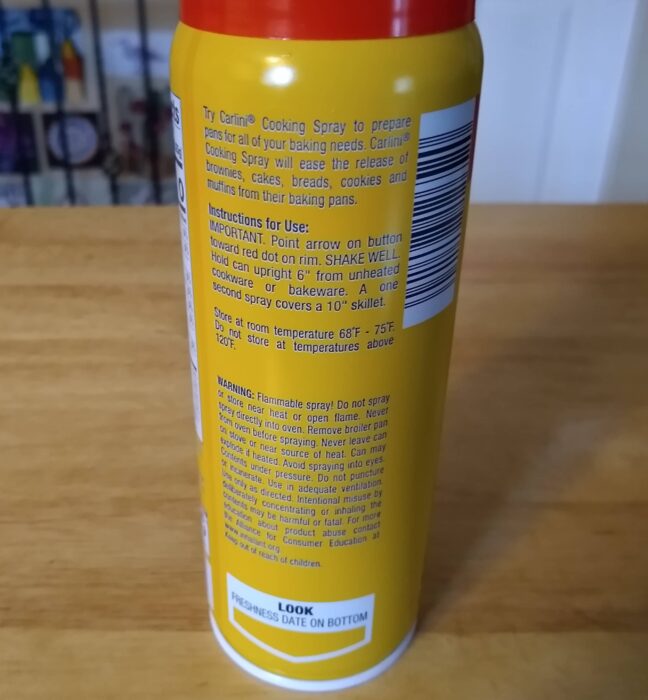 Directions for use on the Original spray. The directions are identical on both cans. (Click to enlarge.)

Nutritionally, the two appear fairly similar. According to the cans, both have about zero of everything: calories, fat, sodium, all of it. In addition, both have almost identical ingredients except for the different oils. 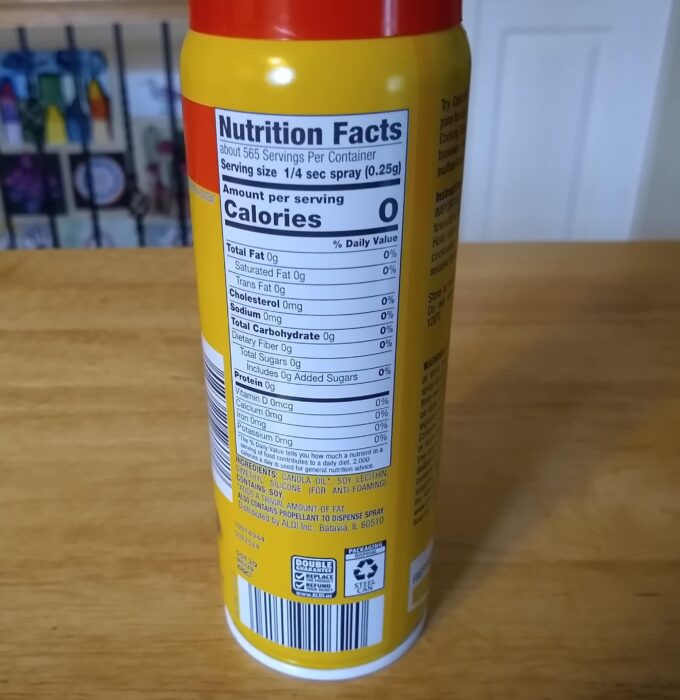 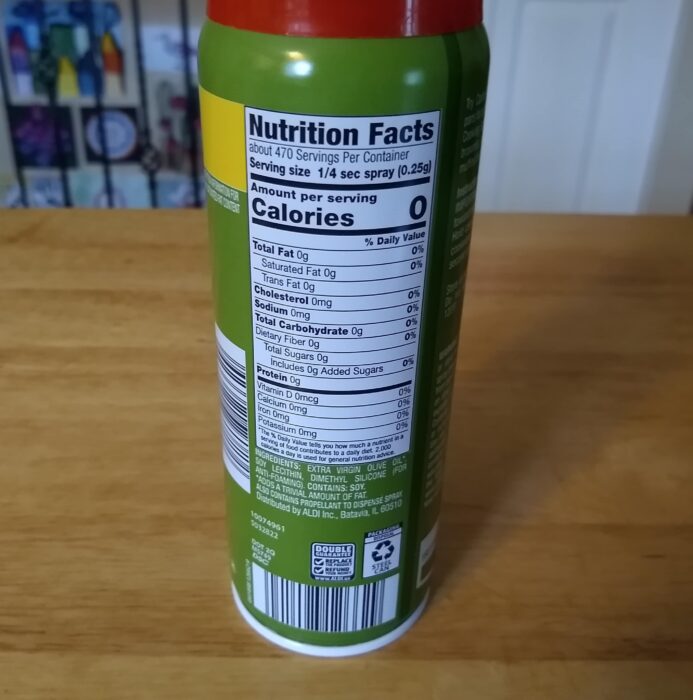 Some people have questioned the accuracy of these nutrition labels, since very few people spray for just one-quarter of a second. Cooking Light, for example, estimates that one use of the spray probably equates to 30 calories or so, plus some fat, although it’s probably still less than what a person would pour into a skillet.

Another debate here is likely to be about the additives that make the can do what it does: soy lecithin and dimethyl silicone, neither of which is in our regular liquid Carlini Olive Oil or Carlini Vegetable Oil. Soy lecithin is in a number of products and is a lubricant, among other things, while dimethyl silicone is an anti-foaming agent. The FDA considers both to be safe, especially in the small quantities associated with cooking spray, but if that’s a concern to you, you may prefer a more conventional oil.

Beyond that, the cans generally perform similar to their brand-name counterparts. I have found that, sometimes, the spray cans don’t perform as well after a lot of use, even when it seems there is still a fair amount of spray left. This may be due to clogging in the nozzle, although I haven’t tested many options for unclogging them. This isn’t always the case, though — sometimes the cans work just fine.

If you need cooking sprays and don’t mind using them over regular oils, Aldi sells versions that are at least as cheap as other generic cooking sprays. The original is a little cheaper and is probably better suited for high heat, although both seem to get the job done if you need them.