In 2016, our family had the opportunity to visit Polyface Farm, just outside of Swoope, Virginia, on the western edge of the state. Polyface is run by Joel Salatin, a legendary advocate for grass-fed beef and other humane farming practices. (Joel is also my father-in-law’s first cousin.) So Aldi caught our attention when it advertised it was selling grass-fed burgers for a limited time. 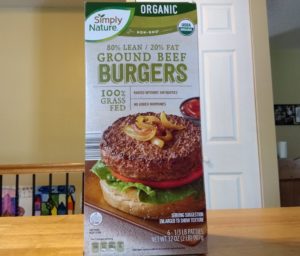 Simply Nature Grass Fed Organic Ground Beef Burgers are an ALDI Find (Special Buy), meaning that they’re only in stores for a short time. They come in a box in the frozen section and contain six 1/3 pound burgers. The box runs $8.99 at the time of this post, which makes this, as far as I can tell, the most expensive burger Aldi sells.

According to the packaging, the burgers are:

A few notes on these designations. First off, 100% grass fed means the cattle are not grain-fed at any point in the process, not even as a “finisher” before butchering. (Conventional beef is often grain fed through part or all of the cow’s life, which goes against a cow’s natural diet that consists of grass and whatever it can find while grazing.)

The appeal of getting grass-fed beef is as much ethical as it is anything else: grass-fed cattle tend to be allowed to graze on an open field rather than being confined to the infamous crowded environments that we see in some quarters of the beef industry.

When cows are raised in cramped proximity with other cows, that environment can serve as a conduit of disease. In contrast, grass-fed cows have more space in which to graze and can therefore be raised without antibiotics.

Also, because the cows are grass-fed, they aren’t exposed to grains that are potentially genetically modified, thus the non-GMO designation.

Despite all the claims the packaging makes, there is one crucial piece of information missing: where the beef comes from. Is it a product of the U.S.A. or other countries? Is it a product of one farm or several? There are no countries of origin anywhere on the packaging that I can see, and no specific farms listed, either. I think this information is pretty important, especially for an expensive self-described grass fed burger. Whether it’s a deal-breaker depends on your preferences as a consumer, but I do wish this information was there.

Cooking these burgers is pretty straightforward. The box does contain instructions on how to cook the burger, although if you’ve cooked burgers before you have the basic idea. One consideration with grass-fed beef is that it tends to be leaner, so you have to be careful about overcooking the meat. On the other hand, I found these 1/3 pound burgers to be squatter and thicker (as opposed to the more spread-out patties of the 1/3 pound Cattlemen’s Ranch Prime Rib Seasoned Patties) which meant it took a little longer to cook them through. Either way, they’re best prepared on the grill and they should be cooked to 165 degrees.

As for taste? They’re good. The burgers come out juicy, with just the right texture, and we didn’t find any gristle in the ones we tried. 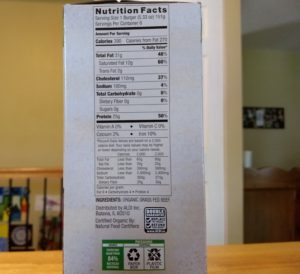 If you’re looking for a good grass-fed burger, this is certainly a candidate. Simply Nature Grass Fed Organic Ground Beef Burgers make for big, flavorful burgers. They also check off a lot of the boxes organic aficionados might appreciate, like being 100% grass-fed (with no finishers) and no antibiotics and no hormones. The box doesn’t list the countries or farms of origins, though, so as best as I can tell there’s no way to know where the beef came from.