Aldi offers a range of milk options, ranging from whole to 2%, to chocolate, and even organic and grass fed. Aldi’s Simply Nature Organic Grass Fed Milk caught my eye recently, and I decided to give it a try. 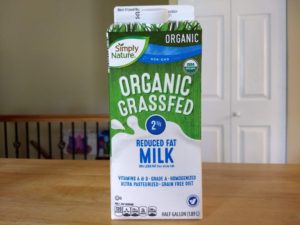 The milk is reduced fat, containing 2% fat, or 30% less fat than whole milk, according to the carton. The carton states the milk contains Vitamins A and D and is Grade A, homogenized, ultra pasteurized, and comes from cows fed a grain-free diet.

The side of the Simply Nature Organic Grass Fed Milk carton also states: “Simply Nature is proud that the farms that produce our organic milk are Validus Certified. Validus is a USDA Process-Verified program for animal welfare certification.” 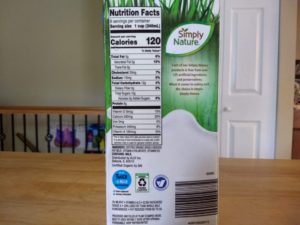 My family didn’t have any complaints about the taste of Aldi’s Simply Nature Organic Grass Fed Milk, although my husband (who likes milk) thought it had a slightly different taste — with grassy notes — compared to conventional milk. Also, the carton stated the milk was good for about a month and a half from the date when I purchased it, which seemed like a long time to me, but it also said it was best to consume the milk within seven days after opening the carton.

Science shows that there are some benefits to drinking milk from grass fed cows rather than grain fed cows.

The American Dairy Association states that milk that comes from grass-fed cows has more healthy fats such as CLA or conjugated linoleic acid and an Omega-3 fat called alpha-linoleic acid. The University of Minnesota Extension says another type of fat called linoleic acid, which is an Omega-6 fat and has been linked to cardiovascular disease, diabetes, and obesity, shows up in lower amounts in pasture-fed cow’s milk as well.

Where is Aldi’s Grass Fed Milk From?

The carton doesn’t say who produces this milk or where it came from, but I visited the website Where Is My Milk From? and entered the carton’s code numbers. It told me Aldi’s grass fed milk is from Aurora Organic Dairy in Platteville, Colorado. Aurora Organic Dairy is a large factory farm with more than 15,000 cows. (According to The Washington Post, that’s about 100 times the size of a typical organic herd.) Aurora has also supplied milk for brands sold at Walmart, Costco, and Target.

Aurora Organic Dairy has come under criticism for not following organic milk production standards. In May of 2017, The Washington Post wrote an investigative piece about Aurora titled “Why Your ‘Organic’ Milk May Not Be Organic”. They visited the farm several times in 2016 and never saw more than 10% percent of the cows grazing outdoors at any one time. They saw the same trend when consulting satellite photos of the farm.

The Washington Post also had a dairy science professor from Virginia Tech evaluate samples of milk from eight farms or companies, some organic and some not, including Aurora Organic Dairy. According to their tests, Aurora’s organic milk tested like conventional grocery store milk with lower levels of CLA and linoleic acid, the healthier components of organic milk. It did not have the numbers associated with organic milk.

The Cornucopia Institute, a nonprofit whose mission is “promoting economic justice for family scale farming,” maintains a scorecard on major dairy producers. In its scorecard for Aldi’s Simply Nature milk, it confirms that Aldi’s organic milk comes from Aurora Organic Dairy, “the largest factory-organic dairy producer in the USA,” and it states that “10 years ago, USDA inspectors found Aurora in ‘willful’ violation of the law, including illegally bringing in conventional cattle and confining cows without grazing.” Aldi was scored low by the Institute in large part because it did not respond to the Institute’s request for information.

What About Other Grocers?

Aldi isn’t the only store singled out by the Cornucopia Institute. The Institute points out that none of the private-label store brands they contacted participated in their dairy survey and scorecard program. Other store brand milk that receives a low rating on their scorecard includes Trader Joe’s, Kroger’s Simple Truth, Meijer Organics, Costco’s Kirkland Signature, and Walmart’s Great Value. A common thread is transparency, as few grocers seemed inclined to respond to the Institute’s request for information.

Horizon Organic, a large-scale organic farm operation with products sold at both our local Walmart and our local Target, also scored low in large part because it did not respond to the Institute. Horizon has, like Aurora Organic, been criticized for its practices.

Aldi’s Simply Nature Organic Grassfed Milk is advertised as coming from cows fed a grain-free diet, and it tastes fine. It’s also cheaper than a lot of other similarly labeled grassfed organic milk. There are, however, a lot of questions about Aldi’s supplier: Aurora Organic Dairy is a large factory farm that has come under criticism several times in the past decade for allegedly not following standards for organic milk production.

Aldi is by no means the only grocer whose organic milk supply line is in question, but it still leaves us concerned. After all, if we’re going to pay extra for milk that is marketed as organic and grassfed, we want to make sure that the cows in question are actually raised in the way the packaging suggests. We can’t ultimately say what consumers should do, except to arm themselves with the best information they can.