Whenever Aldi does an Italian-themed week, among all the pastas and sauces, there is likely to be some gelato. 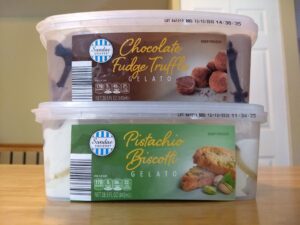 Sundae Shoppe Gelato sold for $3.89 for a 28.5-oz. container at the time of publication. The gelato is an ALDI Find (Special Buy), which means it’s only in stores for a short time, and once it’s gone you’ll have to wait until Aldi does another Italian week before you can purchase it again.

Gelato is an Italian frozen dessert that’s been increasing in popularity in the United States. It looks and tastes a lot like traditional ice cream, but it’s not. I’ve had it a few times from grocery stores, restaurants, and dessert shops, and it does have some differences from its cousin, ice cream.

Here are a few key distinctions between gelato and ice cream, according to the Food Network.

Also, gelato is typically served up with a spade rather than a round ice cream scoop. But let’s be real: use whatever utensil you need in order to get this dessert into your bowl or cone.

Aldi’s gelato came in two flavors: Chocolate Fudge Truffle and Pistachio Biscotti. Another flavor, Caramel Cookie Crunch, was listed in Aldi’s weekly ad, but I didn’t see that flavor in my store.

While gelato is an Italian thing, we actually didn’t see any indication as to where Aldi’s gelato was produced. I assume it was made in the U.S., though.

The label states these gelatos contain no high fructose corn syrup, no partially hydrogenated oils, and no certified synthetic colors. A glance at the ingredients for the two flavors I purchased does show a bit of a laundry list of items such as glucose syrup solids, mono and diglycerides, soy lecithin, and more, along with natural flavors (which may not be as wholesome as they sound).

A quick glance at some other gelato choices on the market indicates that Breyers and Haagen-Dasz are not better in terms of ingredients because they use items like corn syrup. Talenti gelato may be a bit better, although it’s not all together free of processed ingredients either, and it uses natural flavor. If a simple ingredients list is important to you in your frozen dessert, you might be better going with Aldi’s Specially Selected Super Premium ice cream, which has only cream, skim milk, sugar, egg yolks, and vanilla extract.

One last note before we take a closer look at the two flavors available at my Aldi: the plastic containers this gelato came in were difficult to open. Opening them for the first time after you purchase them involves breaking a seal tab, and my middle schooler and I both wrestled with the containers, and eventually I got them both open. It should not be this hard to open a plastic dessert container.

With that said, here’s a closer look at the two Sundae Shoppe gelato flavors my Aldi stocked: 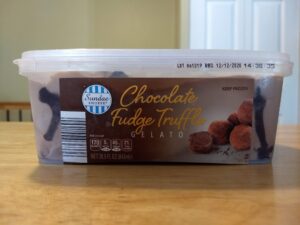 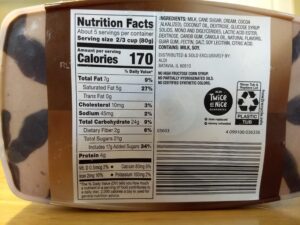 This had a rich chocolate flavor with a fudgy ribbon running through it, and the truffle pieces were fun, although my family wished there were a few more in the container.

This contains milk and soy. 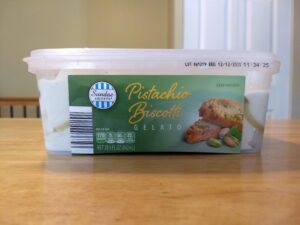 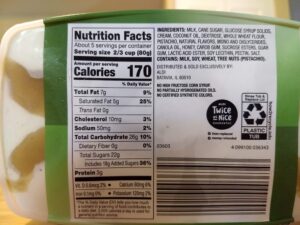 I don’t eat pistachios often, but I have fond childhood memories of eating a pistachio pudding-and-whipped cream dessert my grandmother made every year during the holidays. This gelato reminds me of my grandmother’s dessert. It’s creamy, with that distinct pistachio flavor, and might be my favorite of the two gelato flavors my family tried. Other family members who aren’t as fond of pistachios were less impressed; it just depends on personal tastes.

As far as the biscotti part, there were some soft cookie-like pieces on the top of the gelato when we first opened the container. We hardly tasted them when eating the gelato, though, because they kind of mushed into everything else.

I also wasn’t sure if my kids who have braces could eat this flavor, but there were no visible nut pieces or chunks, so it was fine.

Aldi’s Sundae Shoppe Gelato comes in Chocolate Fudge Truffle, Pistachio Biscotti, and Caramel Cookie Crunch flavors. It’s a bit more of a processed product ingredient-wise than some ice creams we’ve had (but just to be clear, gelato is not the same as ice cream), and the containers were harder to open than they should have been, but otherwise Aldi’s gelato is rich, creamy, and comparable to other gelatos we’ve eaten.