Of all American holidays, Thanksgiving is arguably the most intense when it comes to cooking. American families are more likely to engage in complicated cooking on Thanksgiving than on most other holidays of the year. What’s more, some of the things families make for Thanksgiving can be themselves complicated: the setup can take hours (or days), the meal almost as long, and the cleanup the rest of the night.

A meal that big can come with a big bill that adds up. This naturally begs the question: how much of your Thanksgiving meal can you make using nothing but Aldi products?

The answer is, honestly, quite a lot, thanks to a combination of Aldi’s Regular Buy selection and some well-timed Special Buys (ALDI Finds) that come into the store in early-to-mid November. 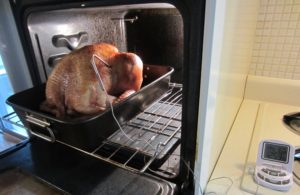 When it comes to meats, Aldi’s prices are comparable or a bit lower than other stores. On the turkey front, we’ve found that Aldi often sells name-brand birds, such as Butterball and Honeysuckle. When it comes to ham, Aldi is more likely to use its own labels, including Appleton Farms and Specially Selected. In all cases, though, we think the meats from Aldi are outstanding. We’re particular fans of the Butterball Turkey and the Specially Selected Spiral Cut Double Glazed Brown Sugar Ham.

And to make sure everything is the right temperature, Aldi sometimes sells an oven thermometer.

If you’re into stuffing mix, Aldi has a few options available under its Chef’s Cupboard label, including turkey-flavored and cornbread. (Some of the flavors are routine Regular Buys, while some of them, such as turkey, seem to be seasonal Special Buys.) We think they taste indistinguishable from the better-known brands and are far less expensive.

Aldi’s potatoes are inexpensive (significantly less than other stores, in our experience), tasty, and varied. You can always go the baked potato route or the mashed potato route (we use Aldi’s Ambiano mixer), or if you’re feeling more exotic, you can try one of Aldi’s many potato recipes. We’re particular fans of the twice-baked potatoes, which can be cooked and assembled ahead of time, then tossed in the oven for the last 15 minutes after the turkey or ham is done.

Aldi’s green beans are 50-60% of the price of other stores we’ve looked at, and they’re excellent. Better still, pick up some of Aldi’s terrific French Fried Onions and follow the instructions on the packaging for some quality green bean casserole.

Aldi’s produce is famously inexpensive, and we’ve found it to be every bit the equal of the larger grocery stores. So if you’re looking for the components for a veggie tray, you won’t be disappointed. We can’t always find everything we’re looking for in the ready-made dip department, but Aldi’s Friendly Farms label stocks a good number of veggie dips to make even this part of Thanksgiving unhealthy.

Rolls are a staple of any Thanksgiving, and Aldi has plenty of them, including standard baking rolls. Croissants, though, are a Thanksgiving tradition for many, and Aldi’s Bake House Creations Crescent Rolls are — and we seem to repeat this often about Aldi products — both delicious and a lot less than their traditional grocery store counterparts. They cook in 11-13 minutes and go great with butter.

Cranberry in a Can

You’ve either heard of this stuff or you haven’t. We have, and Aldi makes both a whole berry jelly and a cranberry jelly under its Sweet Harvest label. The cranberry jelly is sweet, tart, and shaped like the can it came in.

If you want to do it yourself, Aldi carries cheap pie crusts and fillings. (The pie crust is a seasonal item the store stocks through the holidays.) Alternatively, Aldi stocks a range of cheesecakes, pies, and other treats. We’ve yet to find one we didn’t like.

Can you cook an excellent Thanksgiving dinner with just Aldi? We think so. Even as low inventory stores go, Aldi does a good job of providing quality basics, and the store is usually good about supplementing that with some more exotic fare in the Special Buy (ALDI Finds) rotation. There may be one or two things you have to get elsewhere, but not much. And we’re especially impressed with how good it all tastes.