Soda (or pop*) is not good for you. Most people know this. It’s high in sugar and mostly nonexistent in nutritional value. Nevertheless, it’s tasty, and there are occasions when soda (in moderation, of course), can be a special treat, such as during a summer cookout or a birthday party.

It’s also true that generic sodas can have a hard time living up to the brand name stuff. This is especially true, for example, when it comes to generic substitutes for cola. Coca-Cola and Pepsi are the most recognizable colas, and generic copies of these seem even less successful than generic Cheerios. Nevertheless, almost every grocery store tries to do generic cola, along with a few other sodas.

Summit is the Aldi house brand name for the various generic sodas Aldi carries. At the time of this post, Aldi carries a few different soda varieties, including cola, lemon-lime, root beer, a Dr. Pepper-style soda, and orange. This post (which may be expanded over time), will look at the first three of these.

Of note: Aldi sells all of its sodas in 12-packs of cans. At my local Aldi stores, Aldi also sells cola in a 2-liter bottle. I also spotted a lemon-lime soda in a 2-liter bottle in another state. The 2-liter bottles I’ve purchased from Aldi range from 67 to 79 cents, while the 12-packs run $2-3, depending on which stores I buy them at.

On paper, Summit Cola is similar to name brand colas. Like Coca-Cola and Pepsi, Summit Cola is mostly carbonated water and high fructose corn syrup, with a few other ingredients to add a little color and flavor. The nutrition information per serving is also pretty similar:

In practice, though, Summit doesn’t taste as good. My daughter and I both consider Coca-Cola a personal favorite, and we both felt like Summit Cola is more bland than either Coke or Pepsi, despite having about the same amount of sugar. It’s anyone’s guess why. Some of it may be the fact that there’s no sodium in the Summit, while some of it may be due to whatever secret ingredients Cola-Cola and Pepsi put in their beverages. Either way, this stuff isn’t the same. 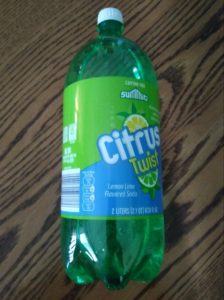 Like its cola counterpart, Summit Citrus Twist has a lot in common with other lemon-lime sodas: carbonated water, high fructose corn syrup, and citric acid, among other ingredients.

Unlike Summit Cola, we feel like Summit Citrus Twist is a better imitation of name brands. My daughter and I both thought it was a solid soda. We thought it was maybe a little closer to 7 Up than Sprite, although we also think the lemon-lime sodas are pretty similar to each other. As a lemon-lime substitute, we think this is a respectable one. As an added benefit, the Aldi soda has slightly less sugar and significantly less sodium than its brand-name counterparts. 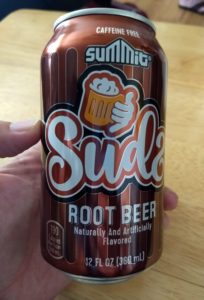 Like the previous sodas, Summit Sudz, the Aldi root beer, has ingredients common to other root beers, most notably high fructose corn syrup and caramel. Nutritionally, here’s how Sudz stacks up to A&W, Barq’s (distributed by Coca-Cola), and PepsiCo’s Mug:

Taste-wise, I liked this one. A&W is still my favorite large-brand root beer, but I think Sudz is not far off that pace, and I actually think I like it better than Barq’s or Mug.

Dr. Dazzle is about the most shameless example of product imitation you’ll ever see, with a name and color scheme that scream Dr. Pepper. The ingredients are also similar, from high fructose corn syrup to the vague artificial flavors.

Like the earlier sodas, Dr. Dazzle has a lot less sodium than its name-brand counterparts. It has just a slightly higher calorie content, but is otherwise pretty similar. 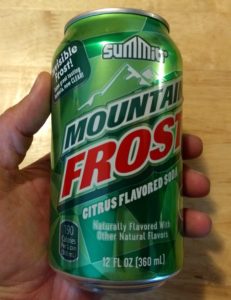 Aldi’s can imitation of Mountain Dew is arguably even more shameless than its imitation of Dr. Pepper, if that’s even possible. It’s pretty much impossible to miss what Mountain Frost’s can is trying to copy.

Nutritionally, Mountain Frost has slightly more calories than Mountain Dew and Mello Yello, about the same amount of sugar, a lot less sodium, and similar levels of caffeine. All of them contain, among other things, high fructose corn syrup.

One possible reason: Mountain Dew and Mello Yello both contain concentrated orange juice as a key ingredient. That ingredient is absent from the Mountain Frost ingredients list. The impact means that the Aldi imitation here is a dud.

Aldi makes an interesting line of soft drinks. We couldn’t help but notice that all of them have a lot less sodium than their name brand equivalents. How good the taste is varies.

Aldi has a few winners. We think Summit Citrus Twist is a favorable replacement for Sprite or 7 Up and is even slightly better for you. We wouldn’t be opposed to serving this to our friends. We also think Summit Sudz is a solid root beer compared to the name brands and is perfectly fine for use at parties. And we think Summit Dr. Dazzle is an excellent substitute for Dr. Pepper.

It’s all downhill from there. On the cola front, we’ve yet to meet generic cola that’s better than Coke or Pepsi, and Summit Cola is no different. It’s adequate enough if you don’t compare it to anything else, but it’s more bland than major brands despite having plenty of calories and sugar. The upside is that it’s cheap, which might make it attractive for large gatherings, but for our money we’d probably spring for a name brand soda in most circumstances, especially when you consider that name brand colas aren’t all that expensive either.

As for Mountain Frost? In our opinion, it’s a certified bust. We don’t think it tastes anything like Mountain Dew, possibly because of the absence of concentrated orange juice. Whatever the reason, it may look like the name brand on the can, but what’s inside is anything but. Unless you want a Sprite knockoff with more caffeine we can’t recommend this.

* We know there are regional differences in what to call the stuff, because our staff has lived in those different places. We’ll call it soda here, but we do know it’s called “pop” or “cola” or “coke” or “Coca-Cola” in other places.