My favorite lunch is the tried-and-true meat and cheese sandwich. I could probably eat a sub sandwich every day, although my waistline would probably start to punish me for it after a while. I like most sandwiches: ham, turkey, roast beef, chicken, or any of the Italian meats. (I’m okay with salami if it’s paired with other meats, but not by itself.)

Wraps are not my first choice, but they’re fun in their own right. They’re less bready than a sandwich, with a little bit of crispiness that French bread can’t match. A good wrap is a nice change of pace.

Trader Joe’s, the distant cousin to Aldi, keeps a small but interesting collection of wraps in its refrigerated section. Some of them are more exotic — this is Trader Joe’s, after all — but I also found at least one perfectly straightforward option. 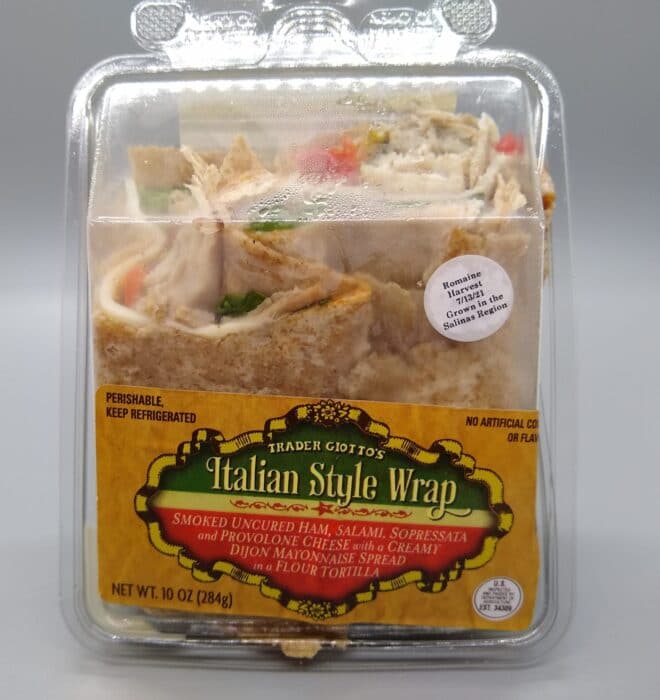 Trader Giotto’s Italian Style Wrap comes in a clear plastic clamshell. At the time of this post, it cost $4.99. While I could easily assemble a wrap for less than that, this price is in the range of what I’ve seen premade wraps go for at my local large inventory grocery store. That $5 price tag is as much about the convenience as anything else.

According to the package, the wrap consists of smoked uncured ham, salami, sopressata, and provolone cheese with a creamy Dijon mayonnaise spread, all in a flour tortilla. I also noticed romaine lettuce and peppers. The package indicates it should be kept refrigerated and should have expiration dates, as it is perishable. 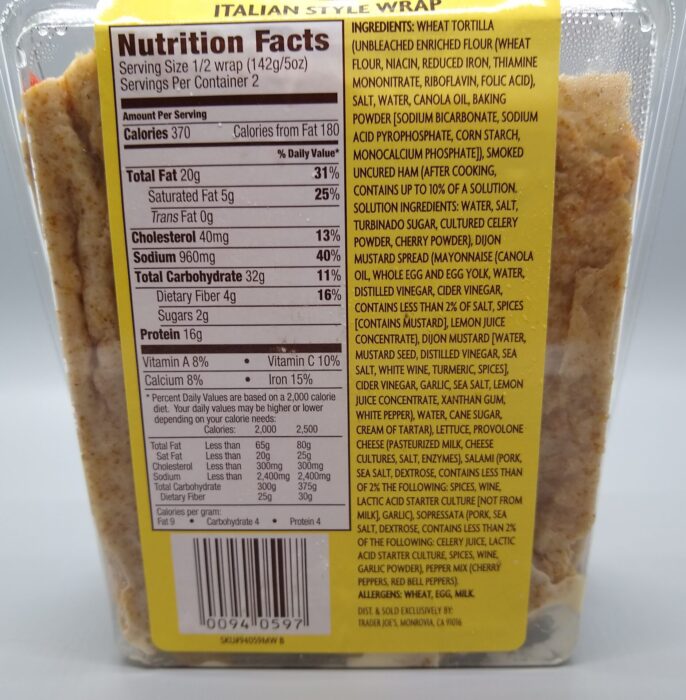 The wrap comes in two parts, so my wife and I split it for lunch. Independent of one another, we both came away with the same mixed feelings. On one hand, it’s a really tasty wrap. Everything tastes good: the meats, the lettuce, and the tortilla wrap. The Dijon mayo and peppers accent the package well, giving the wrap a complete flavor.

However, the balance of those components is less than ideal. This is a wrap heavier on the tortilla than on the meats. Both my wife and I ran out of meat faster than we would have liked. I’m no stranger to wraps, so I know that there will always be some tortilla left at the end, but I would say this was one of the less-full wraps I’ve had.

The Trader Joe’s version of an Italian wrap is a tasty wrap, with a nice blend of flavors. It’s short on filling, though, with less of the meat, cheese, and other inside stuff than I’d like. It won’t be confused for a truly stuffed wrap. The $5 price tag is a small nit, although that cost is on par with other premade wraps I’ve gotten from a grocer.