I can’t say I’m a wrap person. Not really. I tend to go more of the sandwich route. Italian bread, or French bread, or Kaiser rolls, or even just plain bread. Not really wraps. There are exceptions, though: I’ve been in some restaurants where the wrap filling looked so good I took a flyer on a wrap and haven’t been disappointed. So I’m open to wraps, if the time is right.

A lot of restaurants now sell wraps. So do many grocery stores, which offer premade ones in their deli section. Trader Joe’s, despite being a small inventory store, also sells wraps here and there. I’ve tried one of them, an Italian wrap, and while it wasn’t perfect, I liked it enough to keep a lookout for other wraps from the Aldi cousin.

Recently, I spotted another TJ’s wrap that looked intriguing. I decided to try it out. 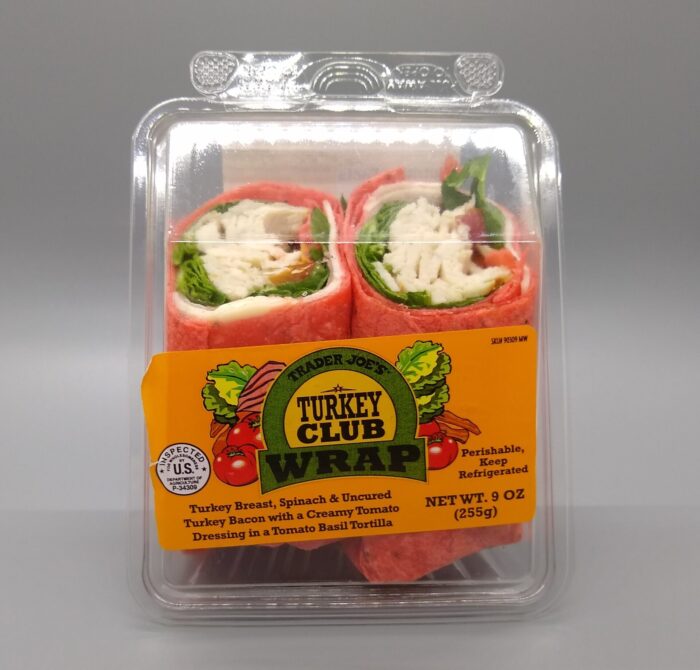 The Trader Joe’s Turkey Club Wrap can be found in the supermarket’s refrigerated section. It is 9 ounces and comes in a clamshell plastic container. It costs $4.99 — not the cheapest, but also consistent with a premade food that you can take out of the box and eat without preparation.

The packaging boasts that this is “turkey breast, spinach, and uncured turkey bacon with a creamy tomato dressing in a tomato basil tortilla.” It is perishable and should be kept refrigerated until you eat it. Be sure to check the use-by day, which should be a sticker on the box. My date was just four days after the day I purchased it, and we ate it the day I bought it. 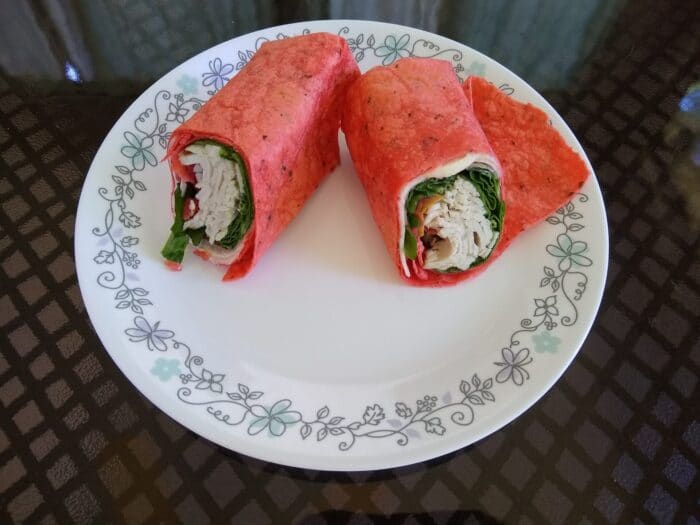 Our testers generally liked it. The texture was soft and fresh, and the taste was good, if not great. As much as the packaging advertises this cornucopia of flavors, I thought it tasted like most other turkey wraps I’d had before. The tortilla was like most other tortillas. The same was true of the turkey (which I thought was a bit dry). I also wish there had been more dressing and a bit more of the turkey bacon.

Still, we thought it was, on balance, a pretty good wrap, and we wouldn’t be opposed to trying it again.

I’ve come to understand that these boxed foods often have a lot of ingredients, especially where the meat is concerned, and such is the case here. It also has a lot of fat (20g, including 3g of saturated fat), a lot of cholesterol (60mg), plenty of sodium (820mg), and no small amount of carbs (68g). It also has 560 calories in total. On the plus side, it does have 27g of protein and a fair amount of Vitamin A as well as some Vitamin C, calcium, and iron. 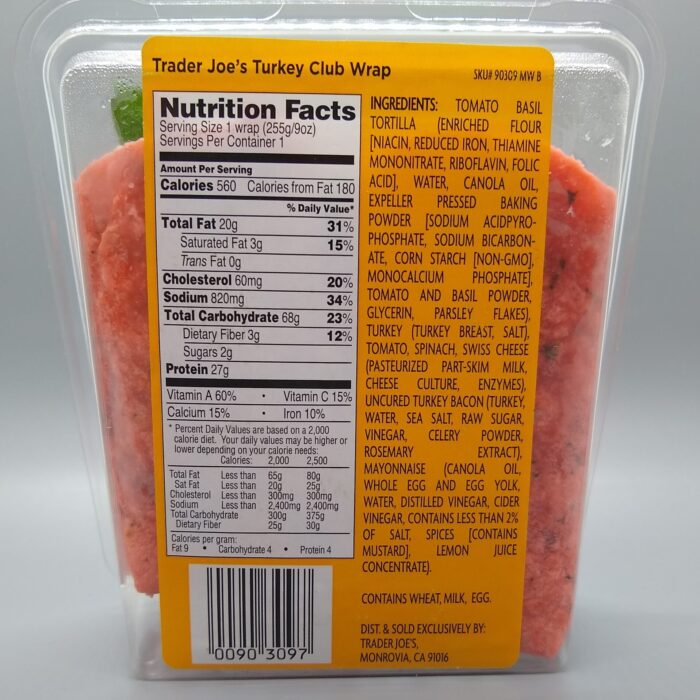 The Trader Joe’s Turkey Club Wrap is a solid, if unspectacular, option for a lunch wrap. The texture is good and the taste is good enough that my testers all ate it. At $5, it isn’t cheap, but for convenience it might be worth a look.