Lunch wraps have become a thing in the last few years. Billed as an alternative to a traditional sandwich, wraps are a less bready way to have, say, meat and cheese. They’re especially trendy in many American-style restaurants, but a few grocers have taken their own stabs at them. One such grocer is Aldi’s distant cousin, Trader Joe’s. 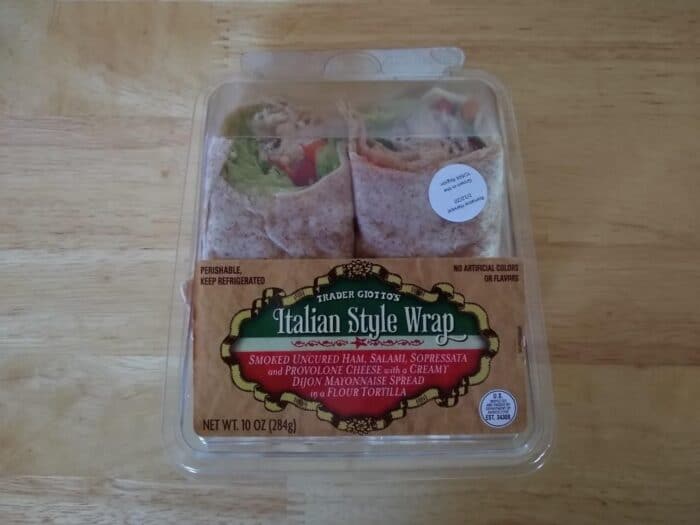 I found Trader Giotto’s Italian Style Wrap in the store’s refrigerated section, next to a number of other ready-to-eat wraps and items. It comes in a clamshell plastic package and cost us $4.49 at the time of this post. That’s not a small amount of money for a wrap like this, although the price is competitive with other ready-made wraps I’ve seen at my local grocer, and it is, of course, a lot less than I’d pay at a restaurant. Given that assembling a wrap on my own would take some time and effort, I didn’t think the price was too bad, although I’m frugal enough that this isn’t something I would buy for lunch every day.

The packaging notes that the wrap consists of smoked uncured ham, salami, sopressata, provolone cheese, romaine lettuce, red bell peppers, cherry peppers, and creamy dijon mayonnaise spread, all of it wrapped in a wheat flour tortilla. The ingredients list on the back is long, primarily because it includes ingredients for all of the wrap’s components, including the meat. 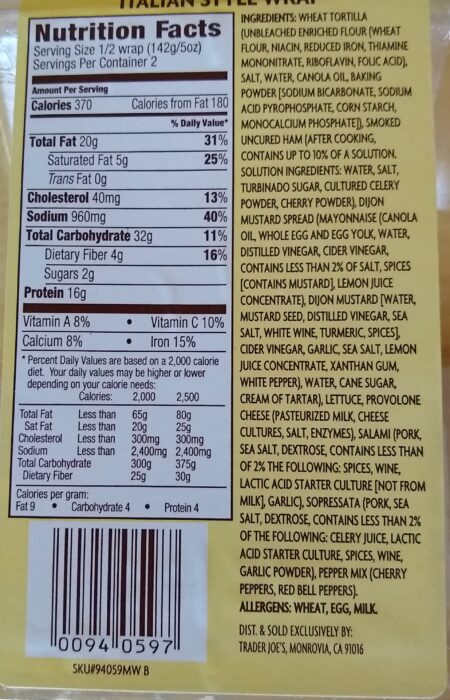 For all that trouble, you’d hope it tastes pretty good, and it does. The meat is tasty, and it’s well complemented by the other ingredients. The cherry peppers add just a little kick, making this a little more than just a mild wrap, and while I’m not a fan of spicy food, I thought this gave it a nice taste.

If you’re looking for a restaurant-style meat and cheese wrap and you don’t want to pay restaurant prices, this Trader Joe’s number hits the spot. It’s tasty, from the meat down to the peppers. It’s high in fat and sodium, though — not to mention the fact that it’s about $4.50 for the box — so it might not be an everyday food. Still, as a rare treat or changeup from the daily lunch, you could do worse.