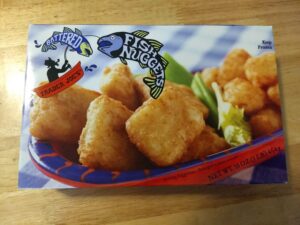 Trader Joe’s Battered Fish Nuggets sold for $4.49 at the time of publication for a 16-oz. box. One box contains about four servings, with one serving consisting of four pieces of fish. When I opened our box of fish, there were 15 pieces, which meant that one person in my family of four would only get three pieces of fish instead of four. So when the box says it contains about four servings, it isn’t joking about the “about” part. (We were gracious and shared our fish nuggets to make the servings more equitable.) 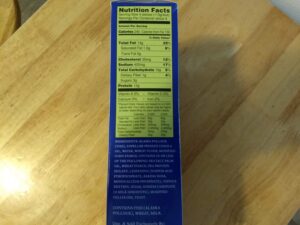 The fish is Alaska Pollock. This is a product of the U.S.

It can be prepared in a conventional over or in a convection oven.

To prepare in a conventional oven, preheat the oven to 475 degrees. Place frozen fish on a greased baking sheet. Book for 15 to 18 minutes or until crisp. Turn the fish over halfway through the bake time for best results.

To prepare in a convection oven, preheat the oven to 400 degrees. Place frozen fish on a greased baking sheet. Cook for 13 to 15 minutes or until crisp. Turn the fish over halfway through the bake time for best results.

The fish nuggets baked up crisp in about 15 minutes and we ate them with tartar sauce. My family thought they were some of the more crisp battered fish meals we’ve had in a while, and my kids liked eating the fish in small nuggets rather than the larger fish sticks, wedges, or fillets we usually get. I also forgot to grease the baking sheet before putting the fish on it, but they didn’t stick, so it worked out okay.

Trader Joe’s Battered Fish Nuggets are made with Alaska Pollock and bake up crisp and tasty. If you liked battered fish, these are worth a try.