Few things say “America” and “fall season” like pot pie. While its origins are unclear — some believe it hails from Greek immigrants — today it is a popular dish throughout the United States. You can make one from scratch, but you can also find pre-cooked frozen versions in grocers throughout the country, including Aldi. Aldi’s distant cousin, Trader Joe’s, also sells a frozen chicken pot pie, and we decide to try it out. 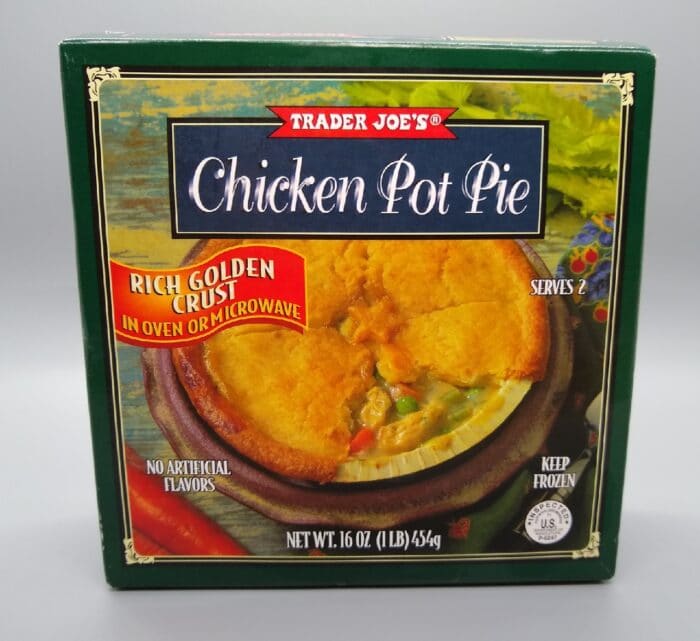 Trader Joe’s Chicken Pot Pie costs $3.99 for a 16-ounce pie. That comes out to 25 cents an ounce, which is a fair bit more than the 10 cents an ounce an Aldi pot pie costs. The TJ’s pie comes in a familiar paper bowl packed in a cardboard box. According to the package, it contains no artificial flavors and serves two. It should be kept frozen until you prepare it.

The box gives you two ways to make it: microwave and oven.

To microwave, you first pull the tab on the side of the special microwave box. Next, you fold the bottom flap of the open end under the box, leaving the pie inside. Then, you place the open box, with the pie, into the microwave, heating for 11-13 minutes or until the filling is hot and the crust is browned. The instructions advise rotating the outer box a quarter turn halfway through cooking time (assuming you don’t have a rotating platter on your microwave). Finally, let it stand 5 minutes before serving.

To bake in the oven, preheat to 400 degrees. Next, pull the tab on the side of the outer box, remove the pie from the box, leaving it in the paper bowl, and place it on a cookie sheet in the center of the oven. Then, heat the pie for 60-65 minutes, or until golden brown, then remove and let stand for 5 minutes before serving.

We decided to go with the oven method. We knew it would take longer, but we hoped it would turn out a little crispier. It did turn out crispy, but it also bubbled over before it was done. Fortunately, the cookie sheet caught it, but let this be a reminder to use a cookie sheet.

We liked it. It had more peas than I like (I don’t like peas) but the gravy had good flavor, the crust was crisp, and the chicken was good. It maybe could have used a bit more seasoning, but that’s easy enough to fix with a little salt or pepper. The servings, by the way, aren’t massive, but it is adequate enough for two people, especially if you supplement it with something else such as a salad or fruit.

The nutrition information is not a great sight to behold. Just one serving of the pie is high in fat (including a very high amount of saturated fat), high in cholesterol, and high in sodium. The ingredients list is fairly long, just like you’d expect from a processed food. It’s maybe a little less processed than your typical store-bought pot pie, though. 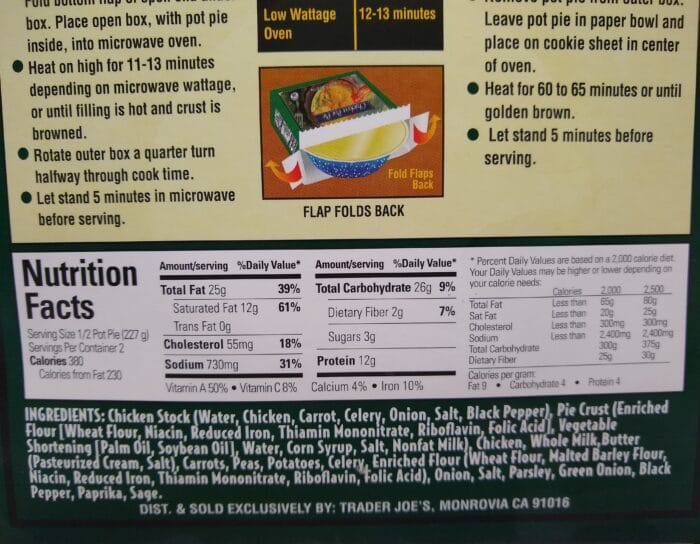 Trader Joe’s Chicken Pot Pie is a competent take on the familiar dish. I’m not sure it does much to distinguish itself from pies you can get other places — it’s 2 1/2 times more expensive per ounce than an Aldi pie — but if you’re a TJ’s fan and you want a pot pie, you can pick up a decent one while you’re there.