Ranch dressing is the most popular salad dressing in the United States. It’s a winner on salads, but is also popular as a dip for veggies, chicken, and other foods. I’ve even seen Ranch dip make cameo appearances on burgers.

Every grocery store I know of carries Ranch dressing, and most have their own generic version of it. Aldi, for example, carries both a standard Ranch as well as a buttermilk version. Aldi’s distant cousin, Trader Joe’s, also carries Ranch … and because it’s Trader Joe’s, it’s also organic. We set out to see if that made it good. 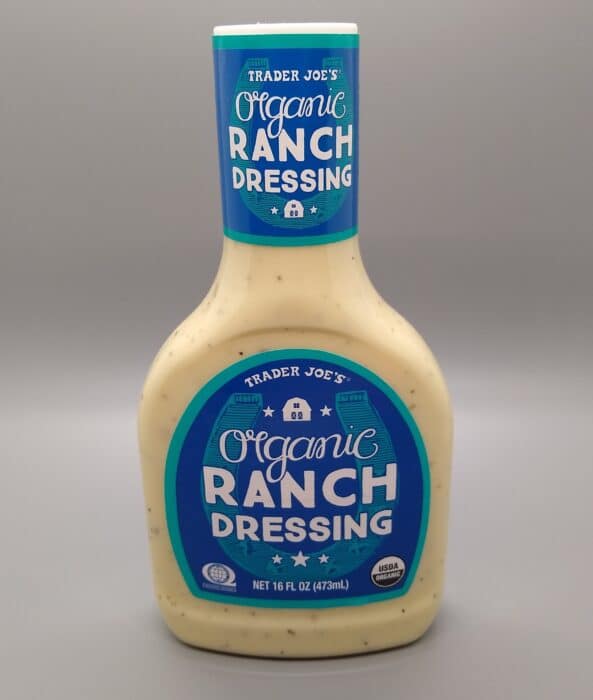 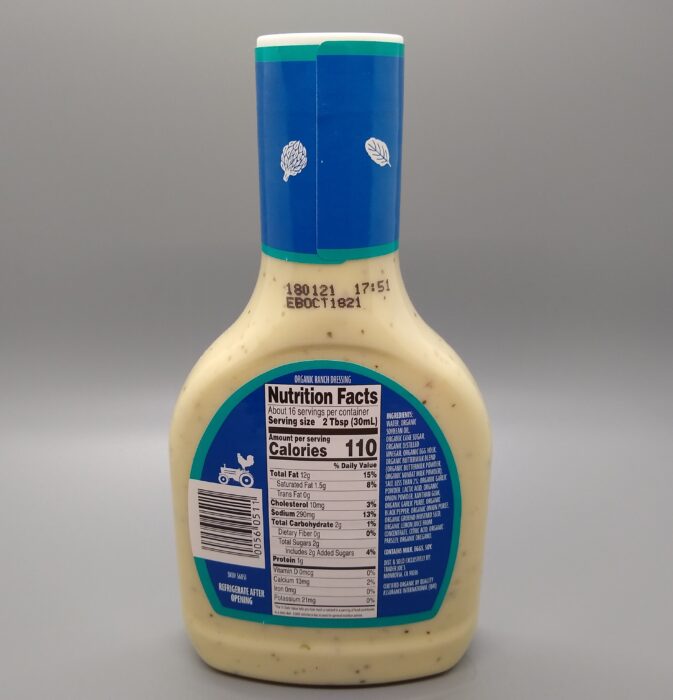 We taste-tested the TJ’s organic alongside the non-organic Aldi standard and Aldi buttermilk. The TJ’s organic has a thinner consistency than both Aldi versions; it’s not water, but it did flow when I tilted the plate I poured some on, unlike the Aldi Ranches.

More importantly, the TJ’s Ranch tastes different than any Ranch we’ve ever had. It’s sweeter, and has a more pronounced vinegar note to it that we don’t taste in other Ranch dressings. It’s different enough that we’re not sure we’d say it tastes like Ranch … at least, not the Ranch we’re used to.

Does that make it bad? Not necessarily. It’s got a flavor that would pair well with a salad and maybe even work as a dip. But there’s also an expectation that comes with the word Ranch on a bottle. If you buy this thinking you’re going to get a specific flavor, you might come away disappointed.

Trader Joe’s Organic Ranch Dressing is an unconventional Ranch, with a sweeter, more vinegar taste that is distinctive from other Ranch dressings we’ve tried. We like it on its own merits — and we think it’s worth a look if you want to expand your Ranch horizons — but whether that’s good enough for you will depend on how badly you want a specific kind of dressing. The price tag, while low for an organic dressing, is higher than non-organic dressings.