In this day and age, there are many kinds of chips out there, from Doritos to Pringles, from sour cream and onion to cheddar. But there is also something special about that most fundamental of chips, the standard, old-school potato chip. No ruffles. No flavored dust. Just an asymmetrical potato with salt. 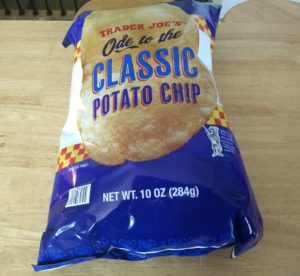 Trader Joe’s Ode to the Classic Potato Chip comes in a 10-ounce bag. At the time of this post, the bag runs $1.99, or about 19 cents an ounce. That’s more than, say, Aldi’s Clancy’s potato chips, but it’s also a lot less per ounce than many national brands, including Lay’s regular potato chips, which currently run about 26 cents an ounce in our area.

These potato chips are really good. They are crisp, salty, and have the right balance of each. They have just three ingredients — potatoes, sunflower oil, and salt — which I think proves the point that, sometimes, less is more. I also thought the composition and texture of the chips was better than some other chips I’ve had: unlike Lay’s chips, for example, which can feel flimsy and crumbly, these are just a bit more substantial, keeping more of their circular-esque shape while also being easy to bite into.

As you would expect, they do have a fair amount of fat (10 g per serving) and sodium (180 mg) per serving, so try to avoid eating the whole bag in one sitting. 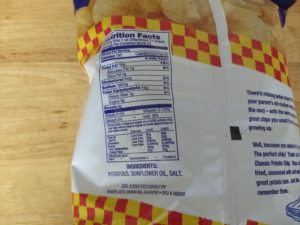 If you’re a fan of the classic potato chip, this is pretty much everything you could ask for. These no-nonsense chips taste fantastic and have a texture that is arguably better than a national brand chip, and for a good deal less than national brand prices. If you’re looking for a complement to that lunchtime sandwich, look no further. Recommended.