A few of my family members love pumpkin pie more than any other type of pie such as cherry or apple, so when Thanksgiving comes around, I try to make sure I have a pumpkin pie ready for the dessert table.

I usually make pumpkin pie using Aldi pie crusts and a can of Aldi pumpkin puree, and I use the recipe on the back of the pumpkin can. That recipe has served me well over the years and it’s a family favorite, especially when paired with a generous scoop of Cool Whip or a spray of whipped topping.

However, store-bought pumpkin pies can work if I don’t have time to bake a pie from scratch. Aldi sells ready-made pumpkin pie during the holidays. So does Trader Joe’s, which is a cousin to Aldi. I recently purchased one of Trader Joe’s pumpkin pies to see if they’re any good, and to see how they compare to Aldi pumpkin pies. 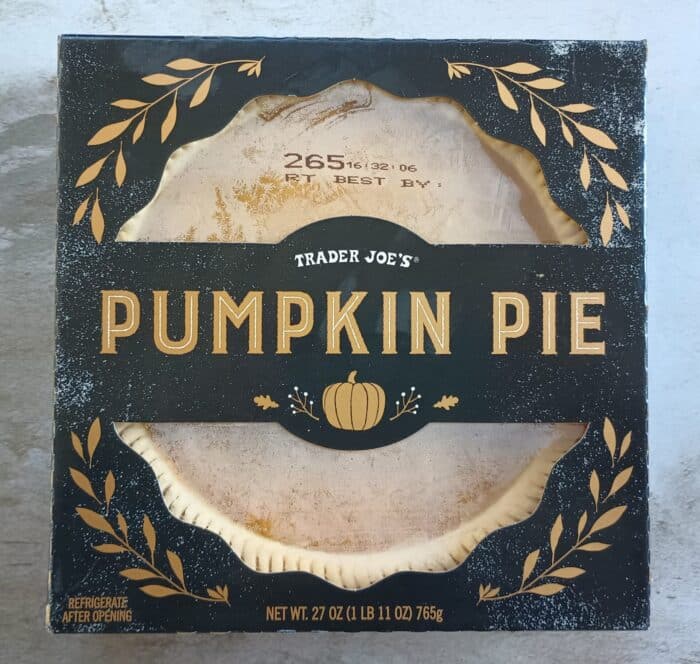 Trader Joe’s Pumpkin Pie cost $6.99 for a 27-ounce pie at the time of publication, or about 26 cents per ounce. That’s about 8 cents more per ounce than the ready-made pumpkin pie that Aldi sells. This Trader Joe’s pie is also 10 ounces smaller than the Aldi pumpkin pie, so if you’re feeding a lot of people during the holidays, the Aldi pie might give you more bang for your buck. Both pies have different ingredients, though, so it depends on what you personally prefer. Keep in mind this is a seasonal item at TJ’s, so they don’t stock it all year.

The back of the box states:

The square root of pi is 1.77, rounded. Trader Joe’s Pumpkin Pie is round, but comes in a square box. What are we rooting around about? Try the pie! It’s rich and creamy, like it would be if you made it yourself. But you didn’t have to make it, because we did it for you. Top it with whipped cream or ice cream, or just dig in with your favorite fork.

I found my particular pie in the freezer section at Trader Joe’s, but I also spotted a couple of identical pies in the baked goods section sitting at room temperature. The box states to refrigerate the pie after opening.

Homemade pumpkin pie and store-bought ready-made pumpkin pie don’t always have the same food safety guidelines when it comes to storage. Homemade pies have a custard base that contains eggs and milk, so you need to refrigerate them similar to how you’d refrigerate a quiche, cheesecake, or other egg-based dish. However, store-bought pumpkin pies often contain preservatives that keep them shelf stable at room temperature for longer. The best thing to do if you buy a store-bought pie is to follow whatever instructions are on the packaging. In this case, as mentioned above, you should refrigerate your TJ’s pumpkin pie after opening. 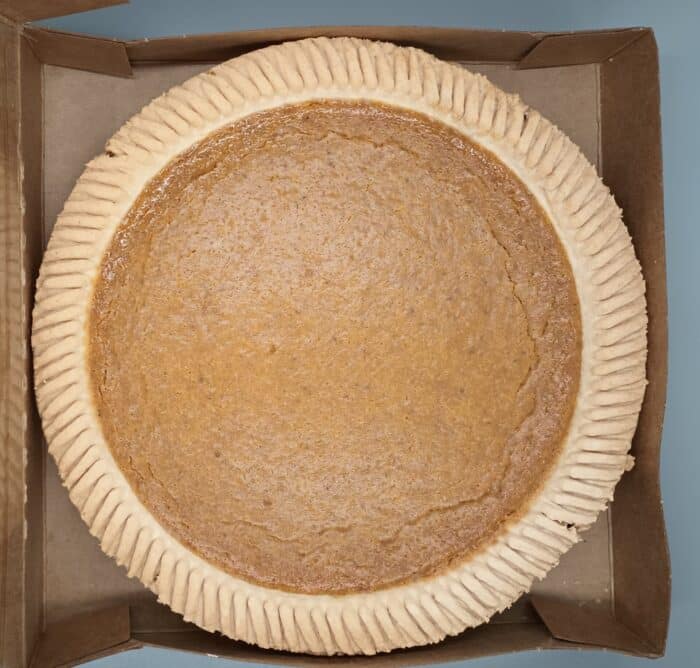 A look inside the box after the pie thawed.

I kept my pie in the freezer until the day I wanted to serve it, and then placed the whole box in the refrigerator to thaw so the pie would be ready to eat in the evening. I left it in the fridge for about eight hours, and it was completely thawed by the time I was ready to serve it.

If you’re looking out for allergens, this contains milk, egg, and wheat. It may contain traces of soy, peanut, almond, coconut, pecan, and walnut. 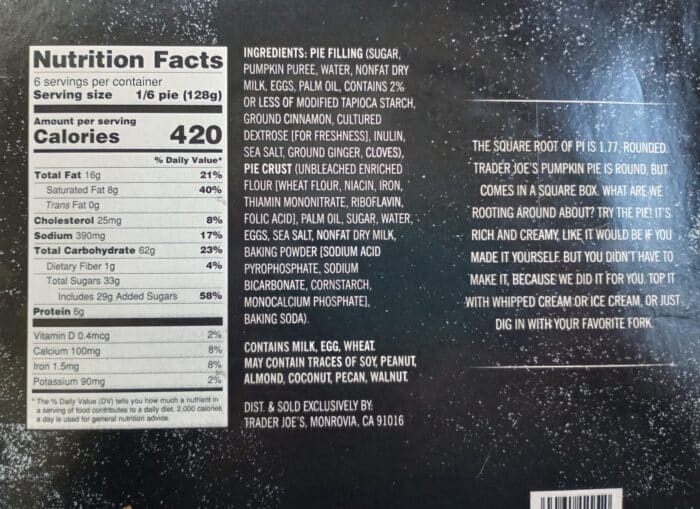 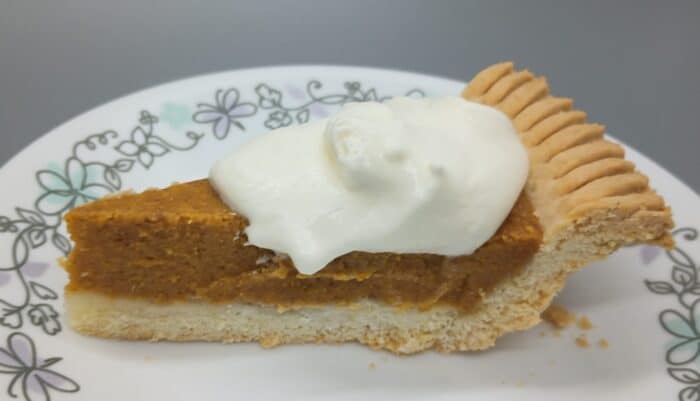 I served this pie with some homemade whipped cream made with Aldi heavy whipping cream and a bit of sugar. My family all agreed this pie tastes pretty similar to homemade pumpkin pie, and it’s easily superior in taste and texture to Aldi ready-made pumpkin pie. This has a rich, smooth pumpkin base with just the right amount of spices and seasoning. The pumpkin flavor shines through without being overpowered by spices. This dessert was a winner for us.

Trader Joe’s Pumpkin Pie tastes so good you might be able to pass it off as homemade. It has a good balance of pumpkin flavor and spices including cinnamon, ginger, and cloves. When it comes to pumpkin pie, we still rate homemade as the best, but Trader Joe’s Pumpkin Pie comes in at a close second. We also like this pie a lot better than ready-to-serve pumpkin pies at TJ’s cousin, Aldi.