Trader Joe’s is one of the most fascinating grocery stores in America. It’s both a home for traditional American food and a host to some of the strangest things you’ll ever see. You could easily walk into TJ’s, pick up some burgers and fries, and then march over and scoop up Trader Joe’s Chile Spiced Pineapple on your way out the door. (Yes, this is a thing.)

Weird mashups like that are nothing new to Trader Joe’s, as any TJ shopper could tell you. During one of our recent forays into Aldi’s distant cousin, we stumbled in a mashup we hadn’t seen before: mushrooms and ravioli. 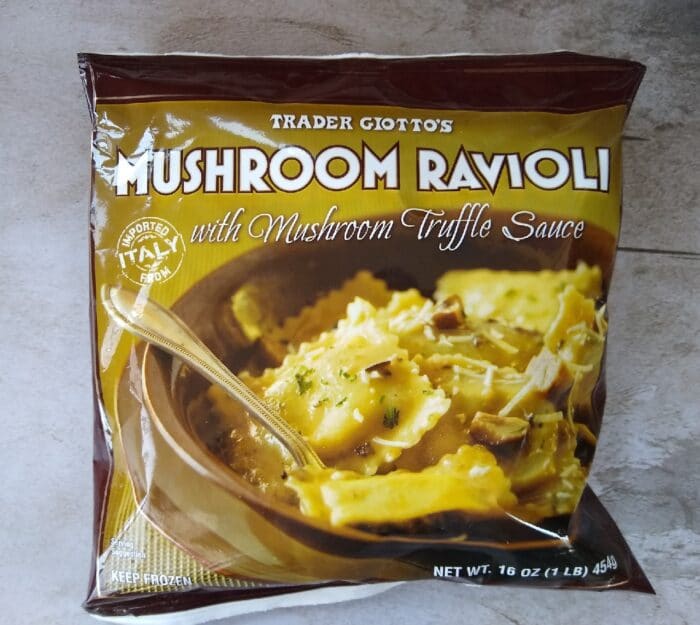 Trader Giotto’s Mushroom Ravioli comes in a 16-ounce bag in the frozen section. It currently costs $3.49. According to the packaging, the ravioli is imported from Italy, comes in a mushroom truffle sauce, and should be kept frozen.

The instructions come with two preparation options: stovetop or microwave.

To cook on the stovetop, place two teaspoons of water, along with the package contents, into a skillet, then cover and cook over high heat for two minutes. Then uncover, lower heat to medium, and stir gently to separate ravioli. After that, you re-cover and continue heating for 4 to 5 minutes or until heated through, stirring frequently as you do. You finally stir gently before serving.

To cook in the microwave, you first place the contents in a microwave safe dish, then cover and cook on high heat for 4 minutes. Then you stir gently, then uncover and heat on high for 3 more minutes. Finally, stir, gently before serving.

We cooked them over the stovetop. 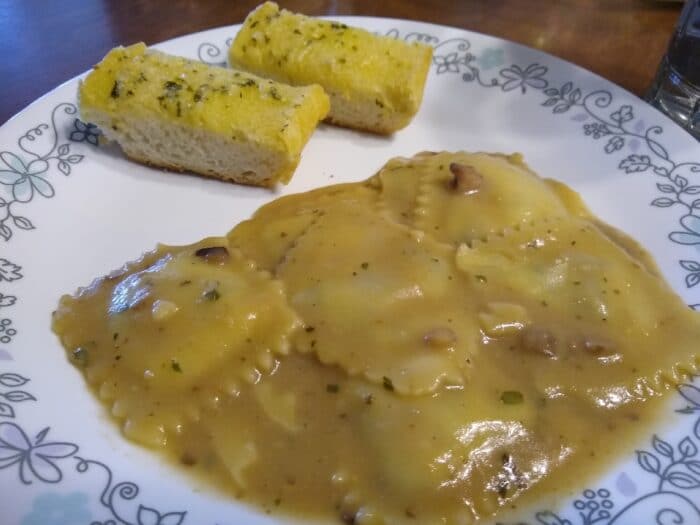 This fell flat in our house, even among the people who like mushrooms. Part of it was the texture: mushrooms can have a few different textures depending on how they’re prepared, and these were more of the slimy variety. That’s not surprising for a frozen food, but it’s still a disappointment. The other issue was filling: there wasn’t much cheese to go with the mushrooms, making the overall flavor a little flat.

Nutritionally, these are pretty processed, and contain a fair amount of fat and sodium. They also contain milk, wheat, and egg. 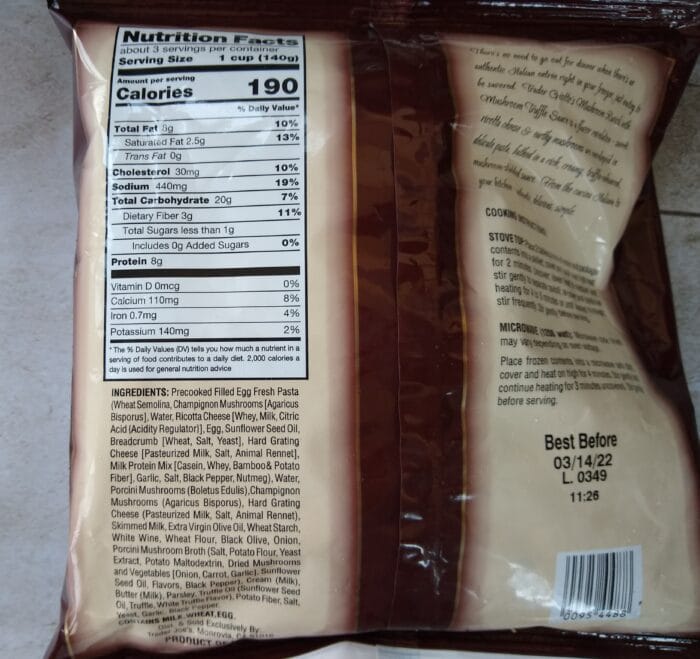 As much as we wanted to like these, Trader Giotto’s Mushroom Ravioli didn’t do it for us. The taste and texture were pretty forgettable, particularly the mushrooms themselves. They’re also a processed food that’s pretty high in sodium. If you really like mushrooms and ravioli, you might still give them a try, but no promises from us.