We use honey on a regular basis in our house, for sweetening plain yogurt or tea, or in peanut butter and honey sandwiches.

I prefer to buy locally produced honey from farmers markets or even traditional chain grocery stores, where over the past few years it’s become easier to find honey from my own community or region. I like buying local honey especially after reports of “honey laundering” were big in the news a few years ago. (You can learn more about honey laundering in this post I wrote last fall.)

Still, sometimes I buy non-local honey from stores such as Aldi if I don’t have time to get to the farmers market or a larger grocer that sells local varieties. I’ve written before about the honey options available at Aldi, but Aldi’s cousin Trader Joe’s also has a large selection of honey. Trader Joe’s sells “mostly mesquite” honey, Manuka honey, honey bears, honey with honeycomb, and more. 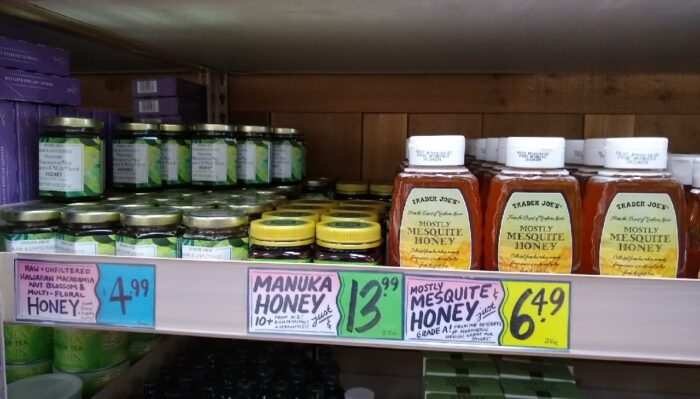 A few of the honey options at Trader Joe’s. 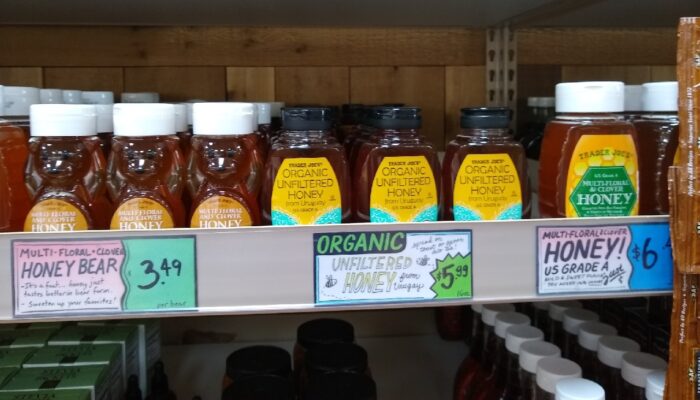 Another honey shelf at TJ’s. 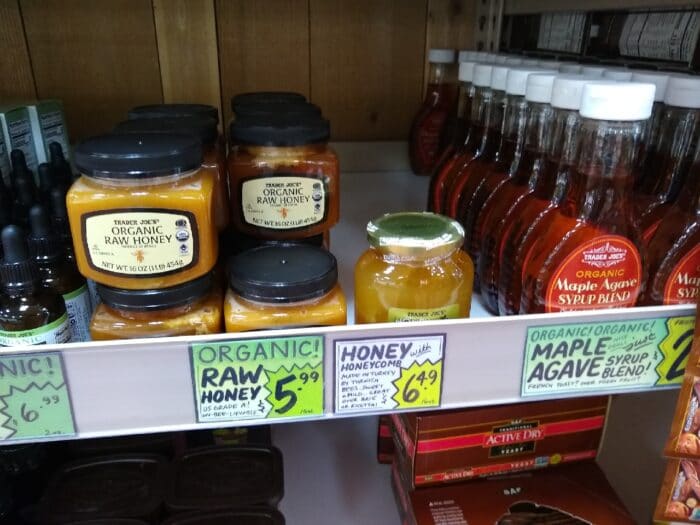 When my local honey supply in my pantry began running low recently, I decided to try one of Trader Joe’s honey options. I ended up buying some organic raw honey from Trader Joe’s.

Trader Joe’s Organic Raw Honey cost $5.99 for a 16-ounce jar at the time of writing. 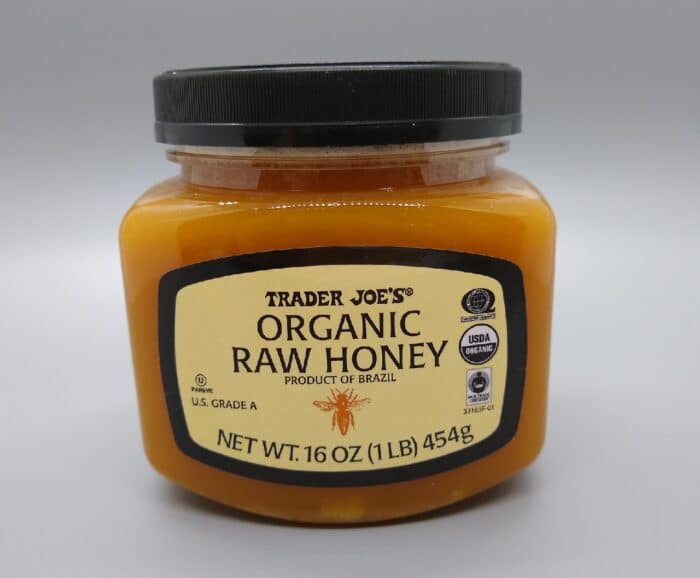 This is a product of Brazil. It’s kosher and bears a USDA organic seal along with a seal indicating it was certified organic by Quality Assurance International. It’s also fair trade certified.

The only ingredient is organic honey. 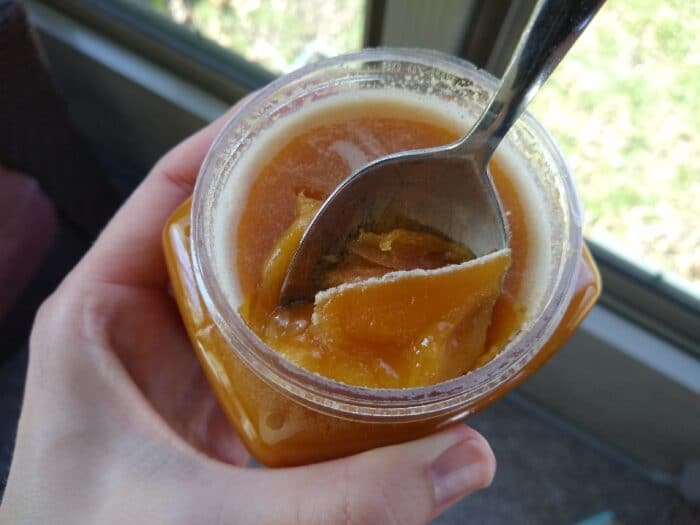 This honey has a solid, crystalized consistency.

I was surprised to open this honey and discover it has a solid consistency, similar to how the honey varieties most of us are familiar with crystalize as they age, but the entire jar is crystalized with a very firm texture. It’s so firm that when I scoop a spoonful out, the indentation remains and doesn’t get filled in by the remaining honey. A little Googling indicates this is normal and actually a good sign in raw honey.

Here’s a bit of the science regarding honey: honey is a mixture of glucose and fructose, and the traditional “runny” honey that we are accustomed to buying in grocery stores has been heat-treated and filtered, which removes the glucose in it and leaves behind the more soluble fructose. Raw honey, on the other hand, is not heated or filtered, so it contains more glucose, which is less soluble and more likely to form crystals.

Raw honey can have different consistencies based on who produces it. I recently finished a jar of locally produced honey I purchased from a local farmer that was labeled raw and unfiltered, and while it had a few crystals floating around in it, along with more of a solid layer on the bottom of the jar, it still had a generally runny consistency. Based on what I’ve read, there is no official standard for what constitutes raw honey, but people in the honey business consider it to be honey that has not been heated.

One blogger I read states that most raw honey is the thicker variety that doesn’t flow out of the jar, but he’s also seen honeys that were labelled raw that had a runnier consistency. He suggests that ultimately you’ll want to read labels closely or talk to the producer to find out exactly what they do with their honey and what their standard for “raw honey” is. That same blogger also says that the types of honey that get “doctored” or “laundered” (which you want to avoid) tend to be the clear, filtered, runnier honeys. So my guess is that you’re getting the real thing with this Trader Joe’s raw honey.

The other question is whether any honey can truly be organic because how can you control where bees forage? Most organic honey comes from remote spots in Brazil and other countries, making the organic goal more attainable, but it’s a consideration to keep in mind. As mentioned earlier, this raw Trader Joe’s honey is certified organic by Quality Assurance International.

As for how this TJ’s organic raw honey tastes, it is sweet and melts in the mouth, with rich, deep notes and a scent that almost remind me of molasses. It turns out to be great for adding to my morning cup of tea. It spoons out of the jar easily without leaving drips all over the jar and counter like other honey does. It reminds me a bit of a spreadable honey that Aldi sold for a short time in 2019. I have not yet tried spreading this Trader Joe’s raw honey on sandwiches or English muffins. It seems a bit thick for that, so it might work best for spreading on hot toast or muffins that will help soften it.

Heating this for a short time — in a separate microwave-safe dish and not in the plastic jar — would also make it runnier if you prefer. 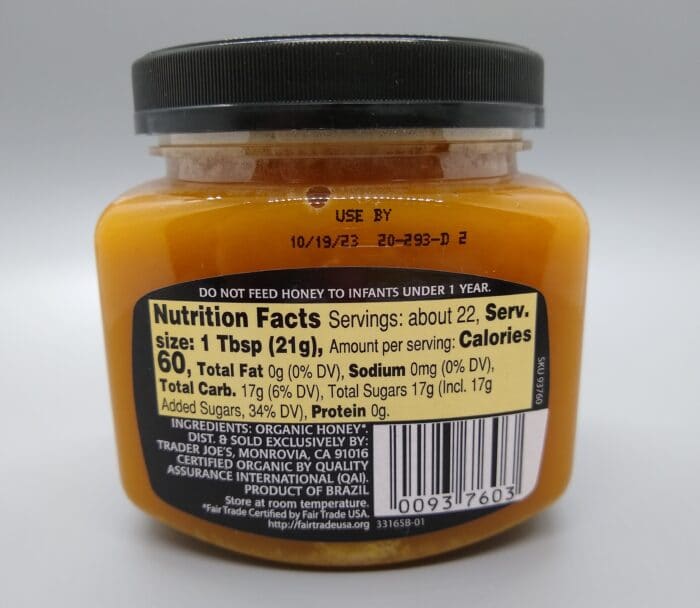 Also remember, don’t feed any honey to babies under one year of age. That’s because honey can harbor a bacteria called clostridium botulinum, which causes botulism. It’s harmless to older kids and adults but can cause serious health issues, including breathing problems, in infants.

Trader Joe’s Organic Raw Honey comes from Brazil and is fair trade certified. It has a solid consistency instead of the runny consistency found in most grocery store honeys. That’s because this is raw, which means it has not been heat-treated. Crystallization is not a bad thing; some people like the richer taste of crystalized honey and how it takes longer to melt in the mouth. It’s also less messy when using in recipes, spreading on warm toast, or spooning into a cup of hot tea.