Honey Nut Cheerios is the best-selling cereal in the United States. The original Cheerios date back to the early 1940s, but General Mills hit the jackpot in 1979 when it added honey and almond flavor to the oat-based cereal. The company would later substitute other ingredients for the nuts, but the flavor remains an incredibly popular and enduring icon in the American cereal universe.

Any consumer will tell you that successfully copying Cheerios is maybe impossible. There are countless generic imitations of Cheerios out there, but none of them quite nail the flavor of the original. It’s not for lack of trying, either: some very large grocers have made a big effort. For whatever reason, generic companies just can’t duplicate the real thing.

The same goes for Honey Nut Cheerios, although I think companies do a little better job making a dupe out of this one. Aldi, for example, has a competent Honey Nut Cheerios knockoff. So does Dollar General. And Trader Joe’s, the upscale Aldi cousin, also makes its own Honey Nut cereal. 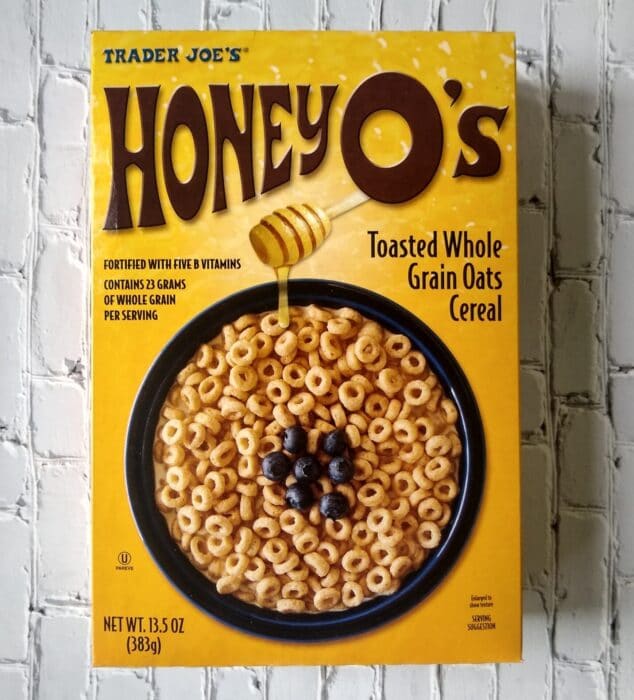 Trader Joe’s Honey O’s are a regular in the TJ’s cereal aisle. It comes in a 13.5-ounce box and currently costs $2.29. That comes out to about 16.9 cents an ounce. That’s more than I’d pay at Aldi or DG, but it is less than the name brand. So overall, it’s a decent price.

Nutritionally, it’s pretty similar to General Mills, with both the good (some fiber, respectable vitamins and minerals) and bad (fairly high sodium and carbs, including sugars). I don’t see much difference in ingredients here compared to either the name brand or its generic competitors. From an allergen perspective, it does contain wheat. 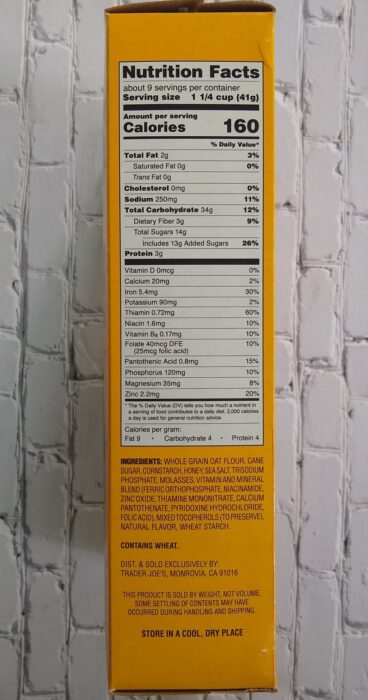 I’ve yet to meet a Honey Nut Cheerios imitation that was spot-on, and this is no different. However, TJ’s O’s are good on their own merits. They’re sweet, crunchy, and pair perfectly with milk. As a Honey Nut fan, I really like these and would have no problem eating them regularly.

Trader Joe’s Honey O’s aren’t a duplicate of Honey Nut Cheerios, but they’re good in their own right, with a solid taste and texture. They’re a capable sub for the name brand, especially given that they’re a little cheaper than what General Mills sells. Worth a look if you’re a TJ’s regular.