My family enjoys honey on toast, on English muffins, in peanut butter sandwiches, and in tea. When Aldi sold a spreadable honey recently, it got my attention. Berryhill Spreadable Honey comes in two varieties: pure honey or cinnamon. I got the cinnamon one. 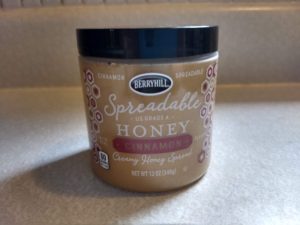 It sold for $3.99 for a 12-oz. container at the time of publication. It’s a limited-time ALDI Find, so it will only be in stores for a short time.

The Berryhill Cinnamon Creamy Honey Spread has 60 calories for 1-tablespoon serving. One serving also contains 16 grams of sugars and 17 grams of total carbohydrates (6% of your recommended daily value). It has no fat, cholesterol, or sodium.

The US Grade A honey is a product of Ukraine, Vietnam, and the U.S. Ingredients are: honey, cinnamon, and natural flavor.

Natural flavor, by the way, is a laboratory concoction that is used to make a variety of foods taste more appealing, and addictive even, and manufacturers don’t disclose what ingredients go into making natural flavor.

Remember that honey should not be fed to infants under one year of age.

I usually buy locally produced honey from a small produce store or from traditional regional chain grocery stores in my area that stock it. I don’t have much experience with spreadable honey, so the first thing I noticed upon opening the jar of Berryhill Spreadable Honey was the texture. It wasn’t liquid-like and very soft like regular honey. A thin white-ish crust also sat on top of the honey. When I dug in with a spoon, it revealed more normal-looking honey underneath.

A little Googling shows that creamy honey, or creamed honey, is made by mixing honey in its liquid state with honey that has crystallized or gotten grainy and more firm in consistency. Honey naturally crystallizes over time, which is what you see when you leave a jar of honey in your pantry for a while; it’s still perfectly edible. Honey in its creamed form — mixed with liquid honey and with crystallized honey — is less messy; it doesn’t drip like regular honey, which is a plus if you have kids who make their own PB and honey sandwiches.

The cinnamon spreadable honey after initially opening the jar and sticking a spoon in. (Click to enlarge.)

I put the spreadable honey on some buttered English muffins for breakfast, and I tried a spoonful of it in some chai tea. It was excellent on the English muffins, offering a nice balance of sweet honey and cinnamon. It was fine in my tea, too, although some of the cinnamon ended up floating in clumps at the top of my mug. I’d like to try the spreadable honey on some biscuits or rolls later, and it would work well on buttered toast. It might also make a nice dip for fruit like sliced apples.

Overall, it’s a nice treat and I’m glad I decided to try a jar.

Berryhill Spreadable Honey is a limited-time ALDI Find that comes in two varieties: pure honey and cinnamon. I sampled the cinnamon flavor, and it was delicious on an English muffin topped with a little butter. It would go well on any type of bread such as toast, biscuits, or rolls. If you like to sweeten your hot tea with honey, this is a novel option as well. I wish it didn’t have natural flavor added to it, but otherwise, if you like honey, this comes with the benefit of being less drippy and messy than regular liquid honey.