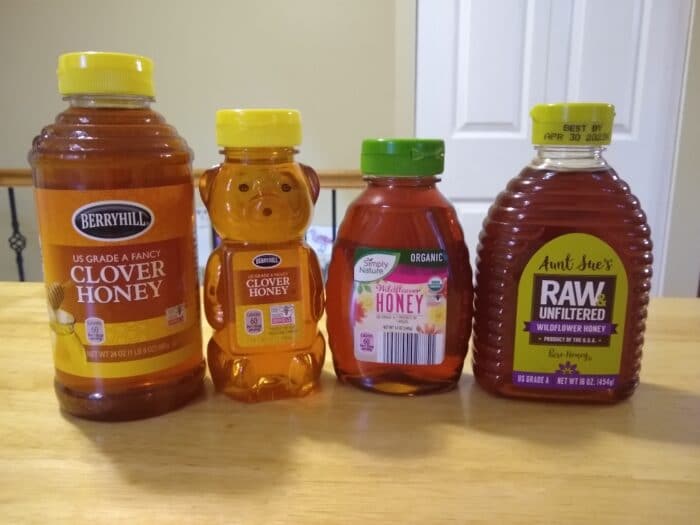 EDITOR’S NOTE: Scroll toward the end of this post to read about Specially Selected Raw Honey also sold at Aldi.

My family eats a lot of honey. We stir it into tea, drizzle it on plain yogurt with fruit and granola, and make peanut butter and honey sandwiches.

But several years ago, the news was filled with headlines about honey in American grocery stores not actually being real honey. Through a practice called “honey laundering,” some manufacturers, including some in China, were introducing cheaper knockoffs into the market, and around that time two major U.S. honey packers admitted to importing large amounts of mislabeled honey.

Honey that is “laundered” goes through an ultra-filtration process that removes pollen and makes it impossible to trace the country of origin, and sometimes the honey is made with fillers or cheap substitutes such as high fructose corn syrup, cane sugar, or rice syrup. Laundered honey has also sometimes tested positive for antibiotics and other undesirable substances.

In 2012, Aldi was among four grocery retailers who were sued by several Florida residents because their honey at the time did not contain pollen.

At that time, I had already been hearing about the benefits of consuming locally produced honey (it’s good to support local bee populations, and some people say it helps with seasonal allergies, although health experts express some skepticism), and the news reports of potentially fake honey were enough to nudge me to begin purchasing honey from small local and regional producers.

I live in an area where I have several options for purchasing honey, including farmers markets and even some small local producers who have gotten their products onto the shelves of some of the larger locally owned grocery store chains. As a result, I have rarely purchased traditional grocery store honey in recent years, and I enjoy supporting the local economy and my local honeybees.

It’s been a few years since the honey laundering scandal broke into public awareness, though, and the industry has made strides to put out a better, more transparent product. One example is the creation of True Source Honey, whose website states that they offer a:

… voluntary system of traceability for those participants who wish to demonstrate through an independent third party that their sourcing practices are in full compliance with U.S. and international trade laws. This system permits honey to be tracked from the consumer back through the supply chain to the country of origin and the beekeeper that harvested the honey from the beehive.

True Source states that it represents about 25% of the honey sold in the U.S.

As it turns out, the honey sold at Aldi under its house brands of Berryhill and Simply Nature both bear the True Source seal.

In looking at what sorts of honey options are available at Aldi these days, it turns out that for a small limited-inventory store, Aldi actually sells a variety of types of honey as Regular Buys. Some options are under Aldi’s Berryhill, Simply Nature, and Specially Selected private labels and one is under the name brand Aunt Sue’s.

The grocer also sells agave nectar, if you want to try a different kind of sweetener. At different times throughout the year, Aldi also rotates in specialty honey as an Aldi Find for a limited period, including a popular spreadable honey.

Before we take a look at the Regular Buy honey options, remember: don’t feed honey to babies under one year of age. That’s because honey can harbor a bacteria called clostridium botulinum, which causes botulism. The bacteria is harmless to older kids and adults with mature digestive systems, but botulism can cause muscle weakness and difficulty breathing in infants younger than one year of age.

Another tip: all of the honey bottles sold at Aldi advise you not to heat the bottles in the microwave.

Honey never really spoils, but as it ages, it can crystallize and solidify. This does not affect the taste of the honey, and it is easy to remedy by simply heating the honey until it returns to its liquid form. However, because this honey is sold in plastic bottles, it shouldn’t be heated in the microwave. Instead, the best way to heat it is to stand the closed bottle in a pan of warm water and allow it to slowly re-liquefy.

Also, most of these honey bottles say not to store your honey in the refrigerator, as it will speed up the crystallization process. However, some honey experts say refrigeration helps preserve raw honey if you aren’t going to eat it all within three months. Aldi sells one variety of raw honey. More on that shortly. 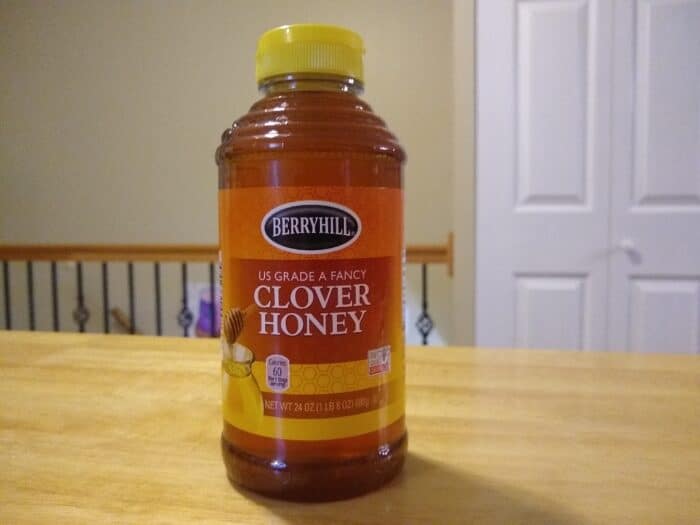 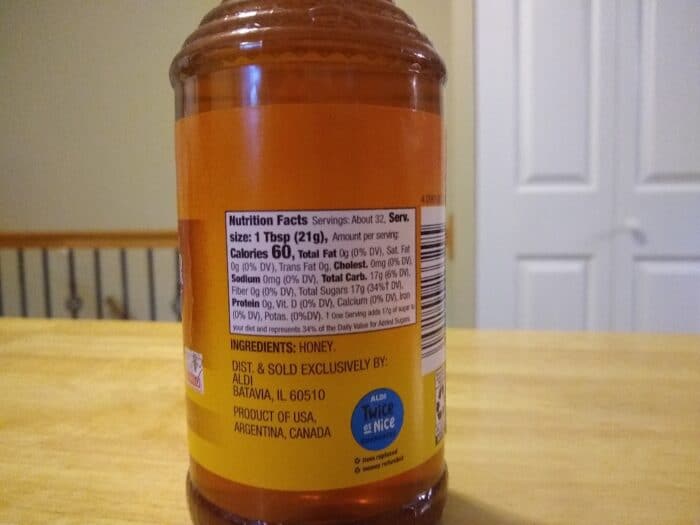 Nutrition information and ingredients for the 24-oz. Berryhill Clover Honey. (Click to enlarge.) 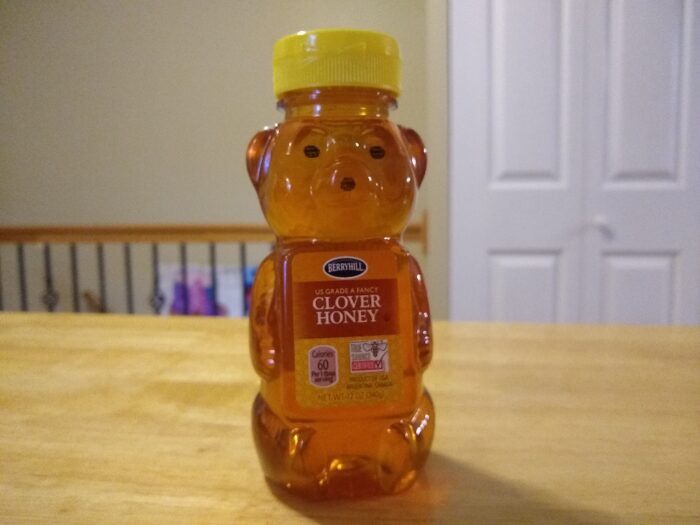 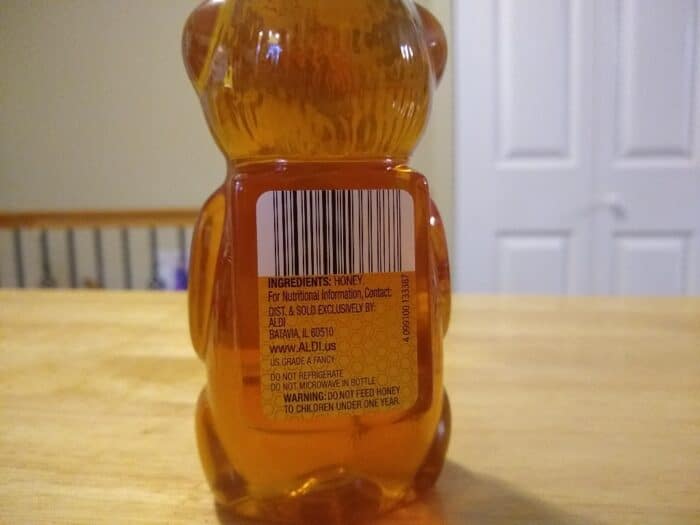 Information for the 12-oz. Berryhill Clover Honey. (Click to enlarge.)

This contains just honey, and it is a product of the U.S., Argentina, and/or Canada. It has a True Source Certified seal, which, as mentioned earlier, indicates that the honey was voluntarily traced using a third party auditing system.

It tastes like other honey I’ve eaten. I put some in hot tea, and I also used some to make sticky sesame chicken.

There is no nutrition information such as calorie count listed on the honey bear bottle, probably because of its small size. Instead, it says to contact Aldi for that information and lists Aldi’s website: www.aldi.us. The larger bottle, though, does list nutrition info, with a 1-tablespoon serving netting you 60 calories, 17 grams of total carbohydrates (6% DV), and 17 grams of total sugars (34% DV). 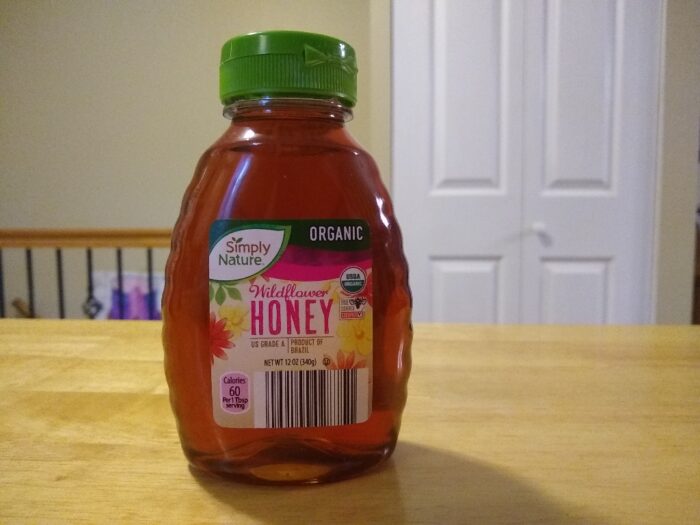 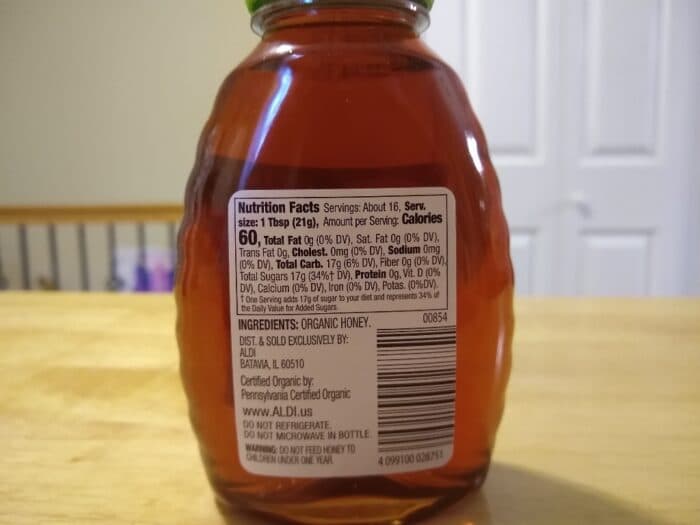 This honey cost $3.29 for a 12-oz. plastic bottle (about 27 cents per ounce) at the time of publication. This is the mid-priced honey option at Aldi.

It lists organic honey as the only ingredient, is U.S. Grade A, and is a product of Brazil. Like Aldi’s Berryhill honey, this also bears the True Source Certified seal indicating that the the honey was voluntarily traced using a third party. The bottle also states this honey is certified organic by Pennsylvania Certified Organic.

This all begs the question: what makes honey organic? Technically, it should be free of agricultural chemicals such as pesticides or weedkillers. But because honey is produced by bees that forage over a swath of territory, some people express skepticism about organic-labelled honey. A writer for Scientific American says:

Organic honey isn’t impossible. It’s just beyond of the ability of most beekeepers. Bee yards situated in isolated spots deep in the Adirondacks, or mountain valleys in sparsely-populated New Mexico, can probably pull off honey free of agrochemicals. Most beekeepers operate within a bee’s flight of pesticides, however, making “organic” honey an illusory proposition.

This organic honey from Aldi comes from Brazil, so perhaps it fits into that description of an isolated spot in the mountains. I don’t know for sure.

The nutrition information for this honey is identical to the Berryhill Clover Honey described earlier, with with a 1-tablespoon serving netting you 60 calories, 17 grams of total carbohydrates (6% DV), and 17 grams of total sugars (34% DV). 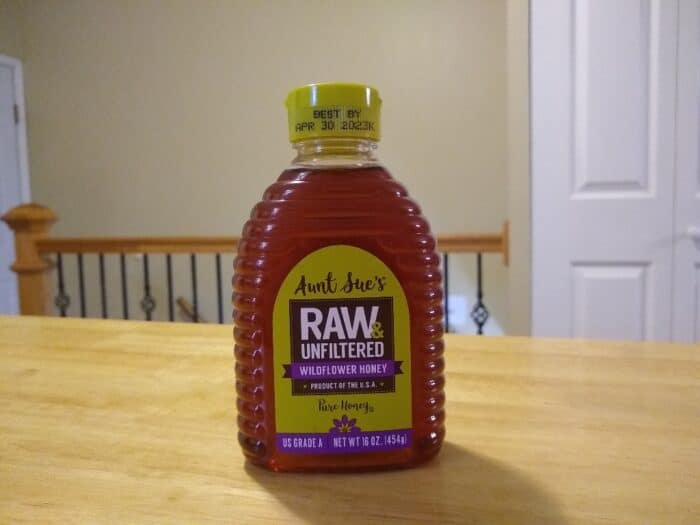 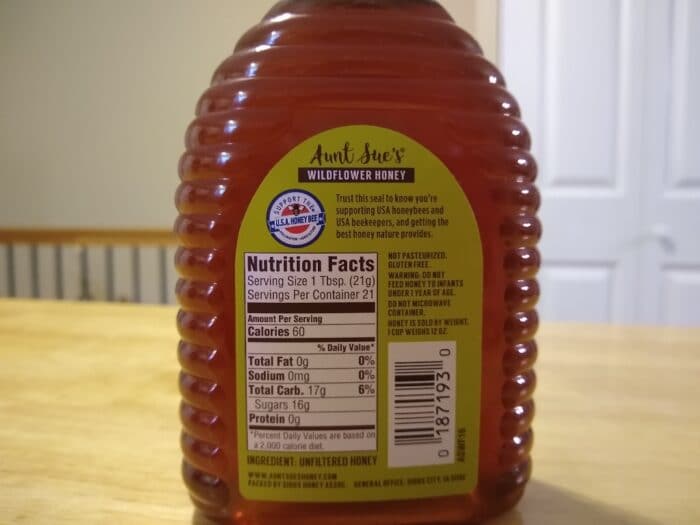 This honey cost $4.99 for a 16-oz. plastic bottle (about 31 cents per ounce) at the time of publication. This is the most expensive honey Aldi sells, and price-wise it costs pretty close per ounce to what I pay for locally produced honey. (I paid $10-$12 for the 32-oz. bottle of local honey currently sitting in my pantry.)

This contains unfiltered honey (unfiltered is good because, as mentioned earlier, ultra-filtered honey has the pollen removed so it is impossible to trace its origin). This honey also is Grade A and is a product of the U.S. It was packed by Sioux Honey Association with general offices based in Sioux City, Iowa. Sioux Honey’s website states it is a co-op owned and operated by beekeepers.

The bottle bears a Support the U.S.A. Honey Bee seal. It is not clear if this is a seal label created solely by Sioux Honey or if this label is part of a separate organization or entity. The bottle states: “Trust this seal to know you’re supporting the USA honeybees and USA beekeepers, and getting the best honey nature provides.”

This honey is unpasteurized, which is why it’s called raw honey. Regular grocery store honey is usually pasteurized, or heated, to kill yeast in the honey that can ferment and change the taste over time. Pasteurization also helps preserve the honey and gives it a smoother texture, according to Healthline. Raw honey has several health benefits, including the fact that it contains more antioxidants.

Because this honey is unfiltered, it also is likely to contain more pollen, which may help fight inflammation, heart disease, and stroke risk along with improving liver health.

As far as taste, this tastes like regular honey, with maybe slightly more floral notes.

A one-tablespoon serving nets you 60 calories, 17 grams of carbohydrates (6% DV), and 16 grams of sugars.

Aunt Sue’s honey is not exclusive to Aldi stores, and it can be purchased on Sioux Honey’s website, or from retailers such as Meijer, Walmart, Kroger, or Amazon. This company also produces Sue Bee honey, which is sold at retailers including Meijer and Target.

Sioux Honey says that “while Sue Bee® honey is filtered (which helps remove more debris that comes from the hive), Aunt Sue’s® honey is strained. This allows more of the pollen to remain in the honey. Because of this, you may notice that your raw and unfiltered honey crystallizes more over time.” As mentioned above, you can easily re-liquefy your honey by placing the closed bottle in a warm water bath.

In 2016, according to the Sioux City Journal, two lawsuits were filed against Sioux Honey for its “pure” or “natural” claims after traces of the weedkiller glyphosate were found in the honey. Ultimately, it was determined that bees were picking up small amounts of the weedkiller, commonly applied to nearby farm crops, when out collecting pollen. The Des Moine Register reported that advocacy groups say the lawsuits were “an attempt to push retailers and, ultimately, federal agencies to adopt better standards and practices that would protect bees, honey and consumers from contamination from herbicides that are widely applied by farmers.”

This seems like a problem that would not be exclusive to one single honey producer, considering how widespread weedkiller usage is nationwide. 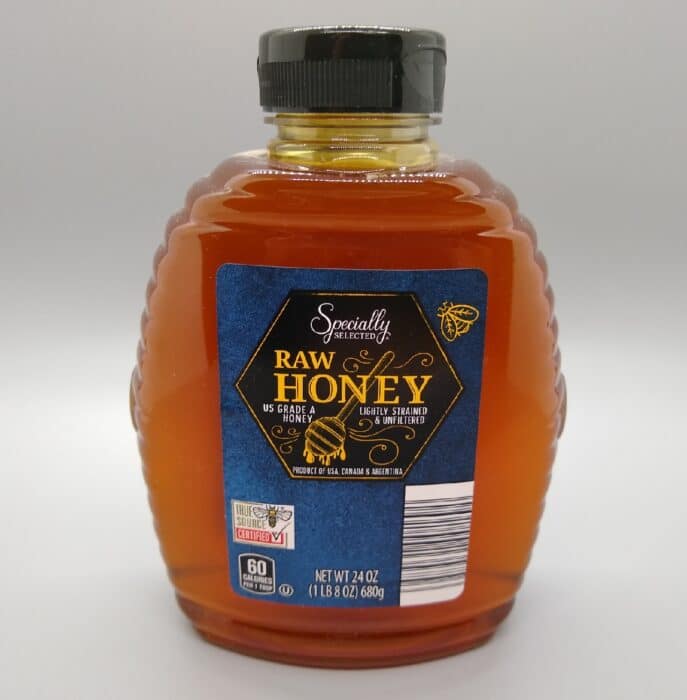 This cost $5.85 for a 24-oz. squeeze bottle (about 24 cents per ounce) in March of 2021. This honey was not on my local store shelves when I first wrote this post about honey varieties at Aldi, although I knew it had existed at some point in time because I’ve seen marketing for it. I figured it was a limited-time Aldi Find. When I saw it in my local store in the spring of 2021, the signage indicates it is now a Regular Buy available all year.

It’s True Source Certified and kosher, along with being Grade A, lightly strained, and unfiltered. It’s a product of the U.S., Canada, and Argentina. 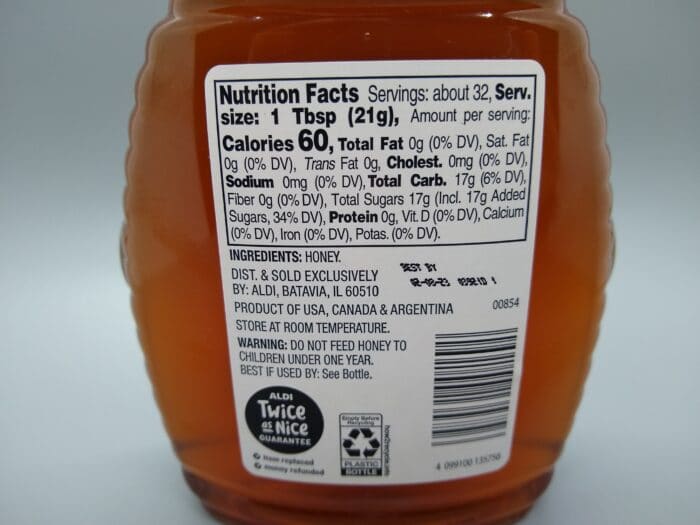 This honey is raw, which means it hasn’t been heated during processing. Sometimes raw honey has a more crystalized texture, but this is as smooth as most other honeys I’ve tried and tastes like what I expect honey to taste like.