There are several potential advantages to spatchcocking a chicken. First, it can help to cook the chicken more evenly because it’s roasting in a single layer. Theoretically, it means certain parts of the chicken are less prone to drying out while you’re waiting for the rest of the bird to cook to the proper temperature. Second, a spatchcocked chicken can be easier to season because you aren’t struggling to sprinkle salt or pepper under the thighs and drumsticks. Third, a spatchcocked chicken usually has more crispy skin. Some people also say spatchcocked chicken is easier to serve because carving it only requires a few extra slices.

Trader Joe’s Spatchcocked Lemon Rosemary Chicken cost $5.49 per lb. at the time of publication. I purchased a 3.18-pound chicken that cost $17.46. The chicken I purchased on May 13th had a use or freeze by date of May 20th. This is a butterflied whole chicken that contains up to a 16% citrus brine with marinade and lemon slices. It also contains no antibiotics, and it’s a product of the U.S. 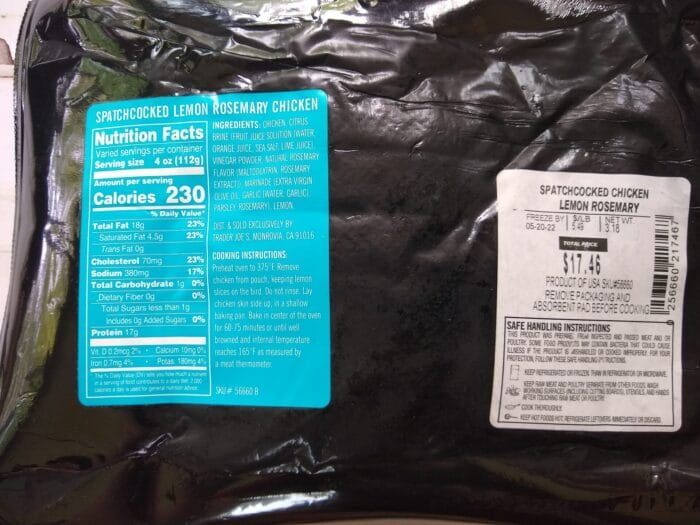 The package has instructions for cooking the chicken in a conventional oven. Preheat the oven to 375 degrees. Remove the chicken from the package, keeping the lemon slices on the bird. Do not rinse the chicken (you should never rinse any poultry because it spreads bacteria around the kitchen). Lay the chicken skin side up in a shallow baking pan. Bake in the center of the oven for 60-75 minutes or until well browned and the internal temperature reaches 165 degrees as measured by a meat thermometer. 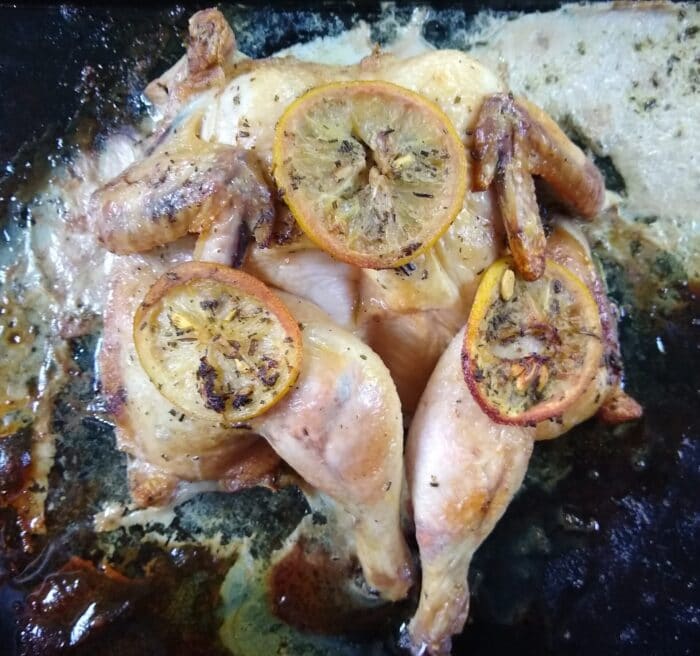 Chicken right out of the oven.

You could also grill a spatchcocked chicken, but I opted to roast it in my oven. It was done after just 55 minutes, so keep an eye on your own chicken because it may finish cooking before the instructions indicate. 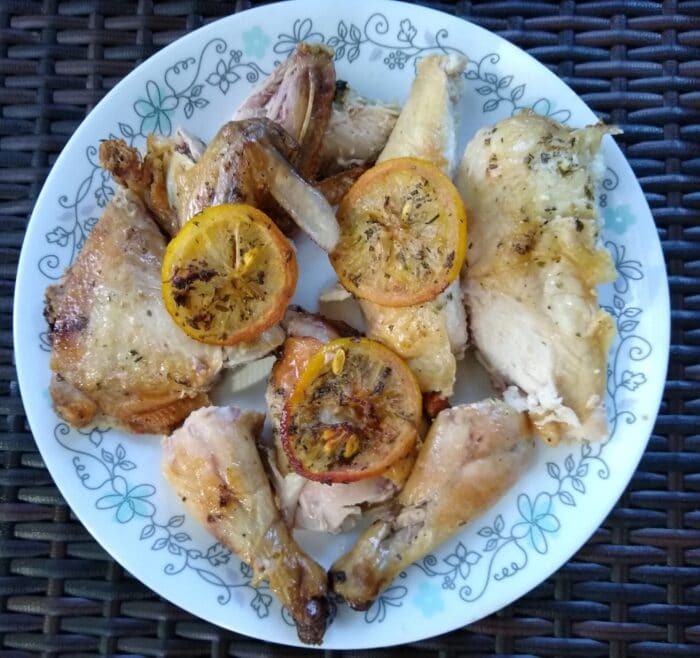 Chicken carved up and ready to serve.

This chicken seemed a bit on the small side at just over 3 pounds, but it was enough to feed my family of four, some of whom aren’t big meat eaters. It has good flavor, and it smelled great while it was cooking. The lemon flavor really comes through, along with other mild seasonings. It was also pretty tender and moist. If you like lemon, this is worth a try.

Trader Joe’s Spatchcocked Lemon Rosemary Chicken features a whole butterflied chicken. It’s a cut of chicken that lays flat while you roast or grill it, resulting in a more evenly cooked bird that is less likely to dry out. It also produces nice crispy skin. This chicken has a good savory lemon flavor perfect for citrus fans.