It wouldn’t be fall without pumpkin-spice-flavored cereal. Trader Joe’s, Aldi’s cousin, has it. 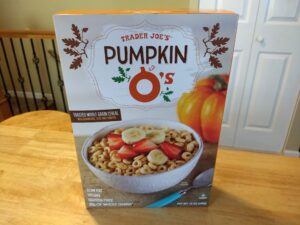 Trader Joe’s Pumpkin O’s sold for $2.49 for a 12-oz. box at the time of publication. It consists of toasted whole grain cereal with brown rice, oats, and pumpkin. It’s gluten free, kosher approved, and contains 20 grams of whole grains. 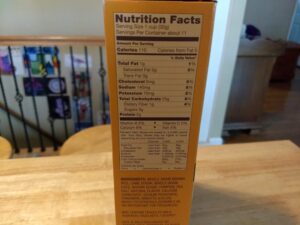 This cereal may contain traces of milk, almonds, hazelnuts, and coconut. It’s a product of Canada.

Trader Joe’s Pumpkin O’s is good, and my kids approved of it. It doesn’t taste as distinctly of pumpkin spice as some other products we’ve tried. I also thought the cereal was almost too much on the sweet side when I first poured myself a bowl, and while it does have its share of added sugar, it’s not as high in sugar as some other cereals on the market. After it had been in the milk for a while, some of the sugar coating seemed to wash off and I liked the taste better.

Trader Joe’s Pumpkin O’s are one of the many products lining the shelves at Aldi’s cousin store to help you get in the mood for fall. They don’t necessarily scream pumpkin spice, but they taste good, if a little overly sweet at first before they’ve had a swim in some milk. They are gluten free and kid approved.