A good fettucine alfredo is not always easy to find. My family has tried several varieties of jarred alfredo sauce over the years that aren’t quite the same as what we get in restaurants. During a trip to Aldi’s cousin, Trader Joe’s, we decided to try their take on a frozen fettucine alfredo. 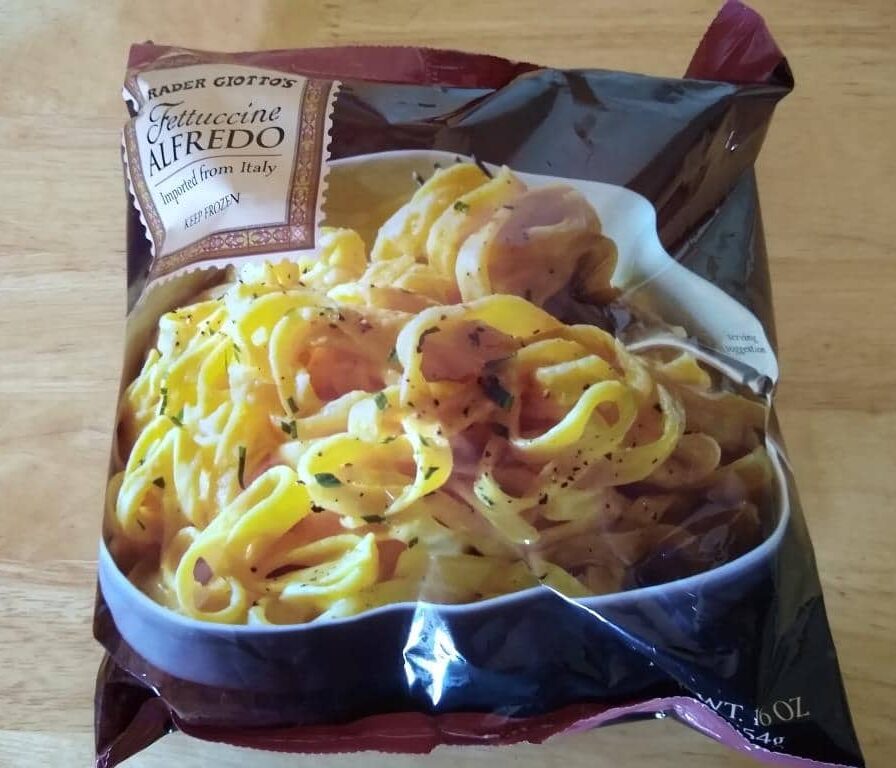 Trader Joe’s Trader Giotto’s Fettucine Alfredo cost $3.99 for a 16-oz. bag at the time of publication. With about three servings per bag, that comes out to around $1.33 per serving. It’s imported from Italy and can be found in the freezer section at Trader Joe’s. 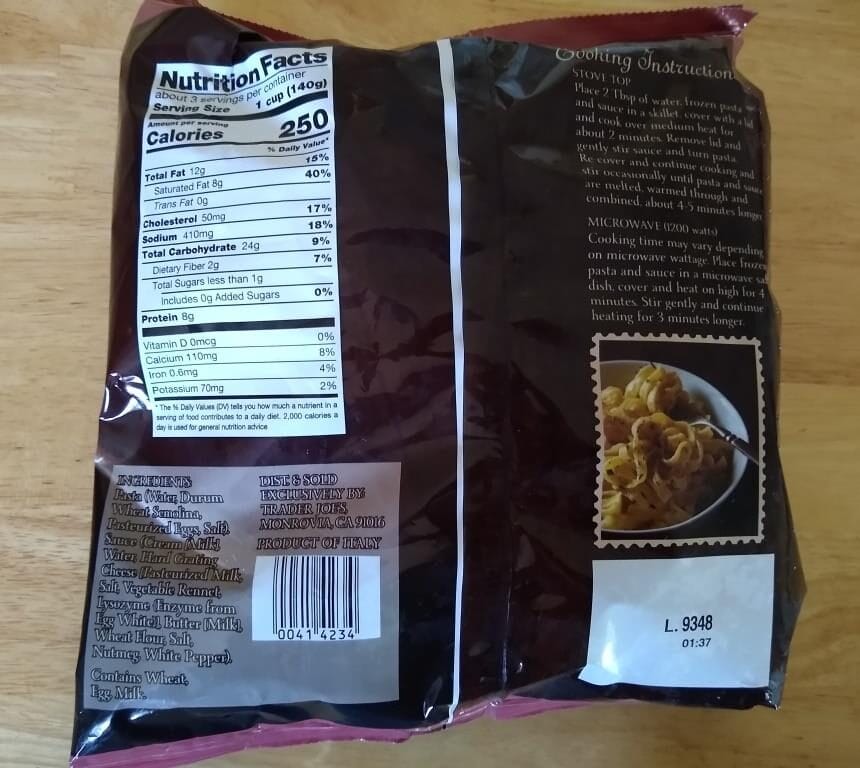 The ingredients are pretty straightforward: pasta, cream, milk, cheese, butter, and a few other ingredients. Those looking out for allergies should be aware this contains wheat, egg, and milk.

When you open the bag, you’ll find about six frozen nests or balls or fettucine noodles, along with several rectangular blocks of frozen alfredo sauce. As the pasta heats, it unfurls and mixes with the melted sauce. 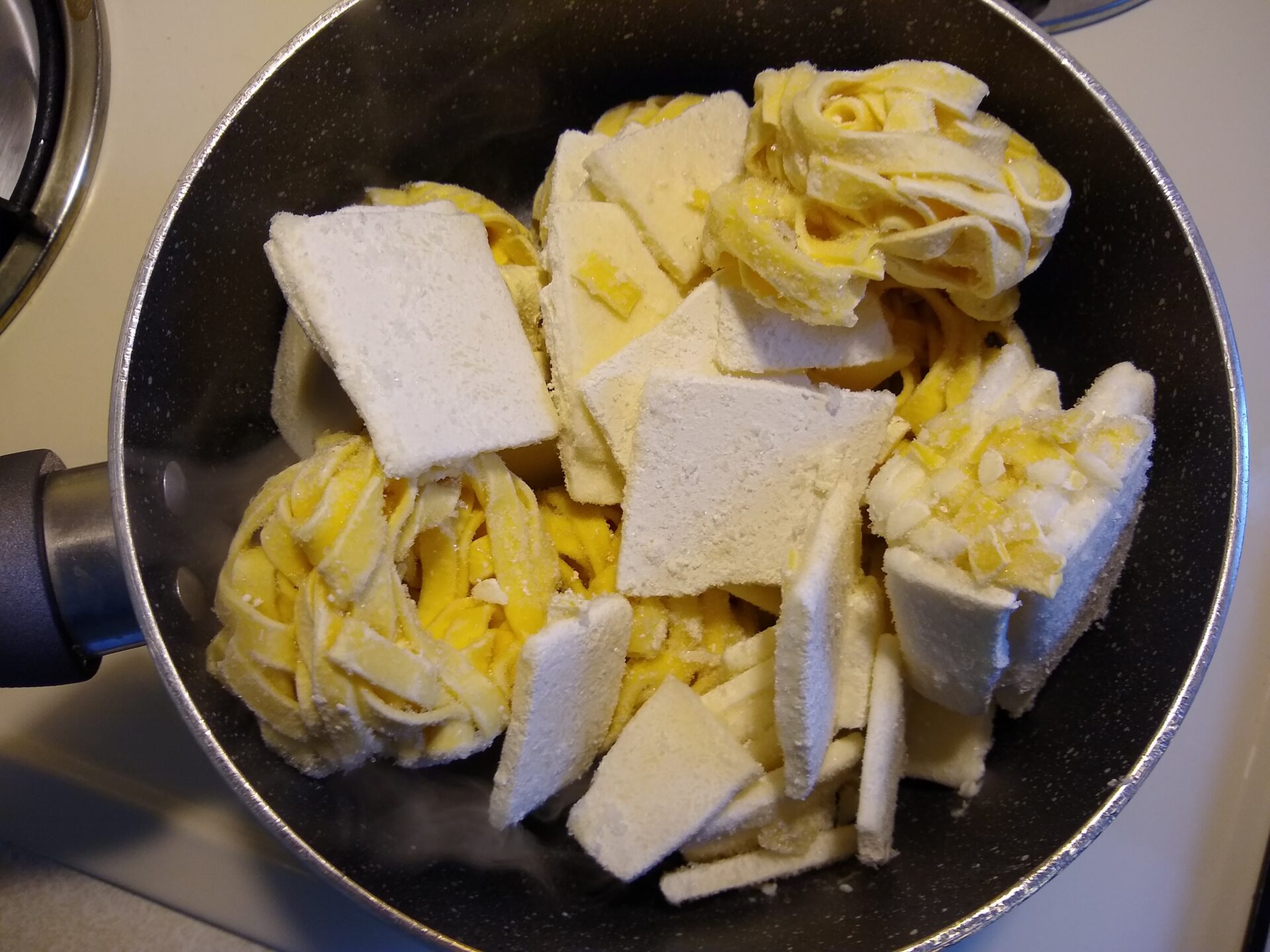 The contents of the bag, still frozen.

Cooking the fettucine alfredo is a simple and quick process, and it can be prepared on the stove top or in the microwave.

To prepare on the stove, place two tablespoons of water along with the frozen pasta and sauce in a skillet. Cover with a lid and cook over medium heat for about 2 minutes. Remove the lid and gently stir the sauce and turn the pasta. Re-cover and continue cooking and stir occasionally, until the pasta and sauce are melted, warmed through, and combined, about 4-5 minutes longer.

I opted to cook our pasta on the stove top. It took about 2 to 3 minutes longer than the directions state to get the pasta completely heated, but that wasn’t a big deal.

To prepare the fettucine alfredo in the microwave, place the frozen pasta and sauce in a microwave-safe dish, cover, and heat on high for 4 minutes. Stir gently and continue heating for 3 minutes longer. 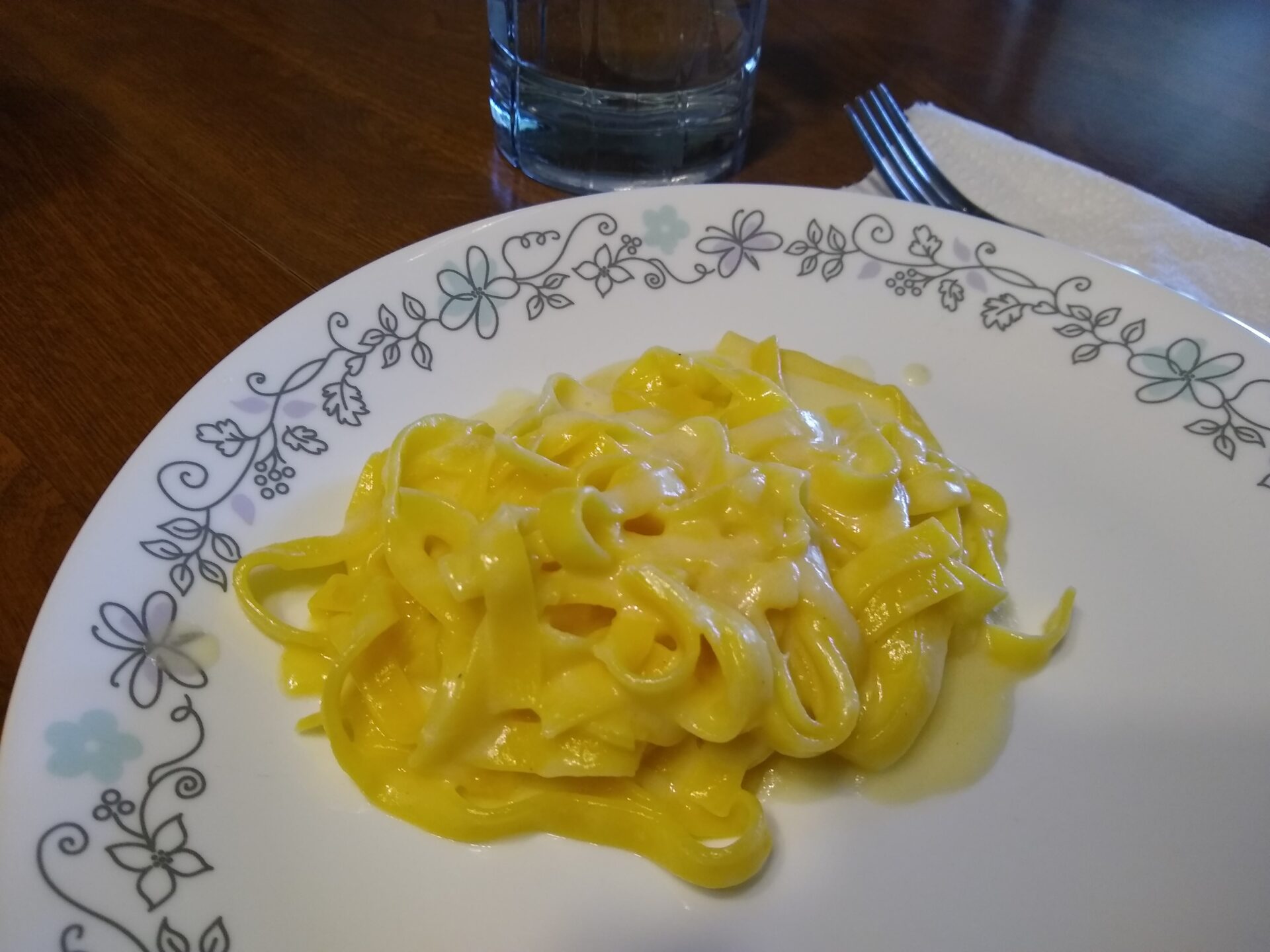 One bag does not contain a lot of pasta, which can be good or bad depending on your dietary preferences. The package says it contains about three one-cup servings. It made enough for lunch for three family members, but the portions felt small, and we ate it alongside other things such as fruit and vegetables to help fill us up (and add some health benefits).

My family all liked this meal, pointing out that it had a restaurant-like quality to it and was superior to a lot of jarred alfredo sauces we’ve had. The pasta was thick and hearty, and the sauce clung well to it. The sauce also was thick and buttery with a good cheesy flavor.

Trader Joe’s fettucine alfredo is rich, buttery, and creamy. If you’re craving pasta but don’t want to spend the money on a restaurant meal, this is a good imitation. The portions are small, though, so plan accordingly.