A few months ago, I saw some Aldi fans on social media talking about how much they liked the tempura shrimp they’d found at Aldi. I kept an eye out for the shrimp on my next couple of shopping trips, but my local store was out of them. They were a limited-time Aldi Find, which means I’ll have to wait until the next time Aldi brings them back.

Fortunately, I can buy tempura shrimp from other stores such as Trader Joe’s, which is Aldi’s cousin. On my latest trip to Trader Joe’s, I picked up a box of these crispy breaded shellfish. 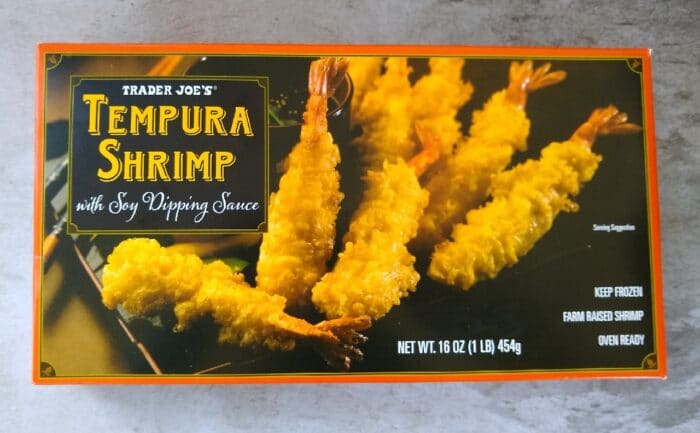 Trader Joe’s Tempura Shrimp with Soy Dipping Sauce cost $7.99 for a 16-ounce box at the time of publication. With 10 large shrimp in the box, that comes out to about 80 cents per shrimp. The shrimp were farm raised and are a product of Thailand.

Tempura is a Japanese method — with ties to Portuguese missionaries and merchants — of coating a meat in a light batter made of water, flour, and sometimes egg and then frying in oil. The frying process makes it fluff up with a distinct crisp texture that is different from western-style deep fried foods.

If you’re avoiding allergens, these contain wheat, soy, and shrimp. 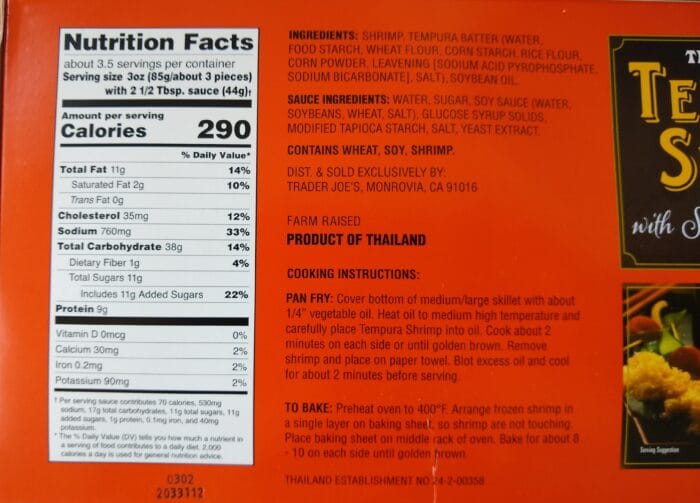 A two and a half tablespoon serving of the dipping sauce adds 70 calories, 530 mg of sodium, 17 grams of total carbohydrates, 11 grams of total sugars, and 1 gram of protein.

The shrimp can be prepared by pan frying or baking in the oven.

To pan fry, cover the bottom of a medium/large skillet with about 1/4 inch of vegetable oil. Heat oil to medium high temperature and carefully place tempura shrimp into the oil. Cook about 2 minutes one each side or until golden brown. Remove shrimp and place on a paper towel, blotting excess oil, and cool for about 2 minutes before serving.

To bake, preheat the oven to 400 degrees Fahrenheit. Arrange the frozen shrimp in a single layer on a baking sheet so shrimp are not touching. Place the baking sheet on the middle rack in the oven. Bake for about 8-10 minutes on each side until golden brown. 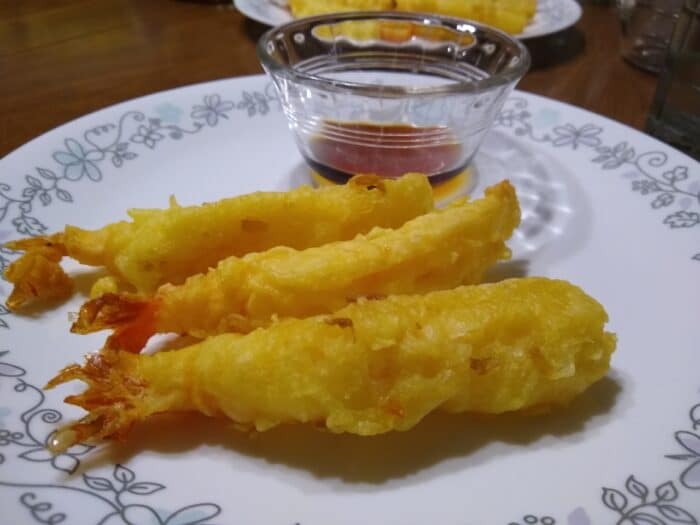 The shrimp after baking, alongside the dipping sauce.

I considered pan frying these but didn’t want to deal with the oil, so I ended up baking them in my oven. I think they also would do well in an air fryer.

They came out of my oven crispy and everyone in my family approved of these. While the kids preferred to dip them in traditional red cocktail sauce, my husband and I liked the soy sauce dip, which has a slightly thicker consistency compared to regular soy sauce. The box came with two large packets of dipping sauce, which was way more than we needed, and I didn’t even open the second packet.

As mentioned earlier, there were 10 large shrimp in the box, so each person in my family of four got two and a half pieces. To make a complete Friday Lenten meal, I served these alongside breaded flounder from Aldi and some French fries and cole slaw from a regular store.

Trader Joe’s Tempura Shrimp are crispy and flavorful and come with a soy sauce dip. If you like shrimp, you’ll like these. Recommended.