Many summers ago I worked at McDonald’s as a cashier, both at the front counter and the drive-thru. That particular McDonald’s opened at 5 a.m. — it was a rural McDonald’s in Kentucky whose customers included tobacco farmers — and because of circumstance I found myself working the 4 a.m. to 1 p.m. shift. It was no fun getting up at 3 a.m. to get into work, although it did give me a front-row seat to McD’s breakfast menu, which I ate off of during my break around 8 or 9 a.m.

One of my favorites was the McDonald’s breakfast burrito. Egg, cheese, and sausage came together with various spices in a tortilla to create a pretty tasty food. Since then, I’ve tried my hand at creating breakfast burritos at home, which is a lot of fun, but it’s also nice to get the occasional breakfast burrito from a store. So when I recently spotted one at Aldi’s distant cousin, I decided to try it out. 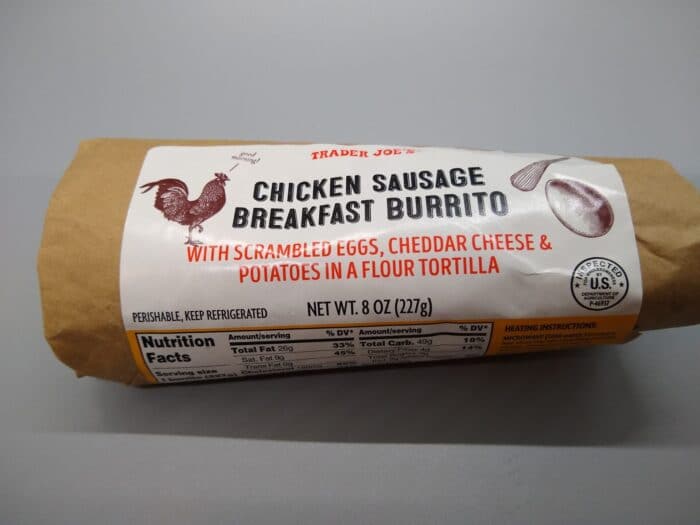 Trader Joe’s Chicken Sausage Breakfast Burrito is 8 ounces and comes in a paper wrap. It costs $3.99, or about 50 cents an ounce. For comparison, the McDonald’s (pork sausage) burrito, which is 4 ounces, costs $1.29, or about 32 cents an ounce. It may not be an entirely fair comparison between the two, but it’s important to note that the TJ’s burrito is a more premium item with a more premium price point.

The Trader Joe’s burrito comes with scrambled eggs, cheddar cheese, and potatoes, all mixed with some spices and wrapped in a flour tortilla. It is found in the refrigerated section and should be kept in the fridge until you cook it. Also note that it should be used by the date on the wrapper.

Nutritionally, the burrito is pretty high in calories, sodium, fat, and carbs. This is not a health food. 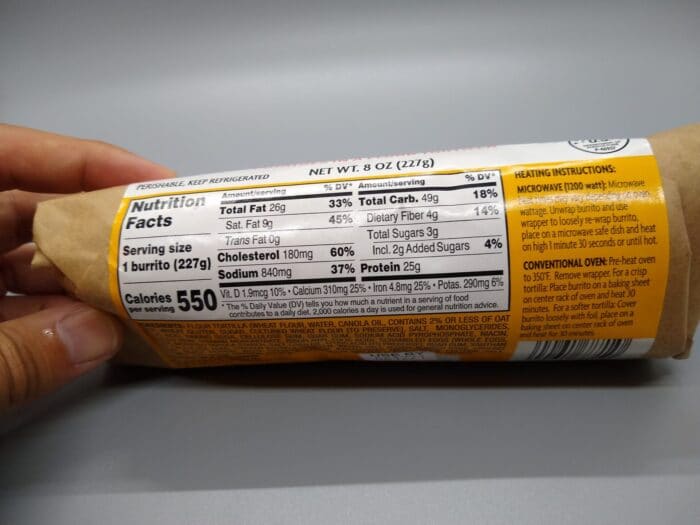 Also be advised that it contains milk, eggs, and wheat.

The package gives two ways to prepare the burrito: microwave or oven.

To cook in the microwave, you unwrap the burrito from the paper, then loosely rewrap the burrito, place on a microwave-safe dish, and heat on high for 1 minute and 30 seconds (90 seconds) or until hot.

While the oven method sounds fun, 30 minutes is a long time, and we figure most early risers will go the microwave route. That’s what we did. Ours came out piping hot and ready after the 90-second cook time. 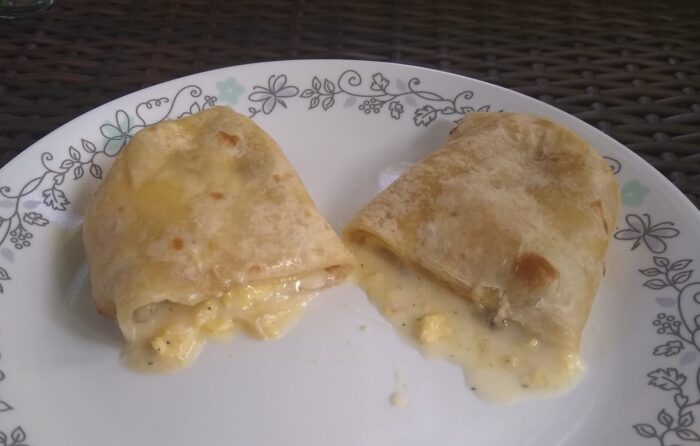 It’s a good burrito. The ingredients come together in the best way, with spices that add flavor without much heat. The chicken sausage and egg are nicely complemented by the cheese, which is soft and smooth. The tortilla is a little chewy on account of being in the microwave (it would probably be better in the oven) but it isn’t a big problem.

My only nit is that maybe the burrito could maybe use a little more filling. It’s not all bread, but it’s also not a stuffed burrito. Still, a single burrito is more than enough food for a single person, and if you have other breakfast side items you might want to cut this in half, as it’s a lot of calories on its own.

Trader Joe’s Chicken Sausage Breakfast Burrito is a quality, flavorful burrito that benefits from good ingredients and being refrigerated rather than frozen. It’s not cheap though, nor is it particularly healthy, so this is a moderation food for sure.