Trader Joe’s, the distant cousin to Aldi, rocks a distinctive vibe. The grocer stocks exotic products, hires friendly workers, and likes to point out when its products are environmentally friendly or organic.

TJ’s, like many grocers, does have a non-food section. We’ve reviewed some of those items, including toilet paper,  shampoo, and other personal care products, and we think they’re pretty good … and not too expensive, either. So when we saw TJ’s tissue paper on the shelves, we decided to add that to our list of products to try out.

Now, facial tissue has a storied history. Originally designed for use as a filter in World War I-era gas masks, Kimberly & Clark (now Kimberly-Clark) marketed Kleenex as a way for women to clean off cold cream from their faces (part of the inspiration for the name). Later, Kimberly & Clark realized more people used it as a disposable handkerchief. Today, its product is synonymous with facial tissue, to the point where people are as likely to ask for Kleenex as they are for tissue.

Kleenex has many competitors. The question is, does Trader Joe’s stack up as a serious one? 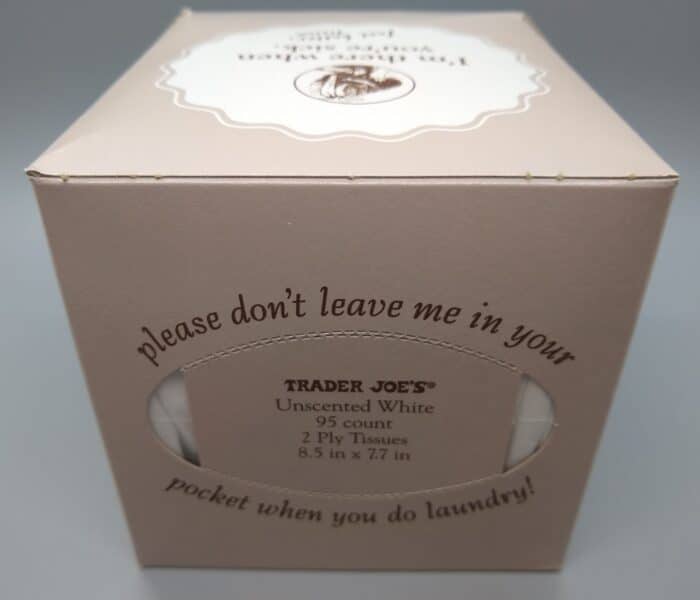 Trader Joe’s Unscented White Tissue Paper can be found in the store’s non-food section. It comes in a single box with 95 tissues. The box says it is made of 100% recycle materials and that bleach was not used in production.

As it does with most products, Trader Joe’s marketing department went all in on the packaging. 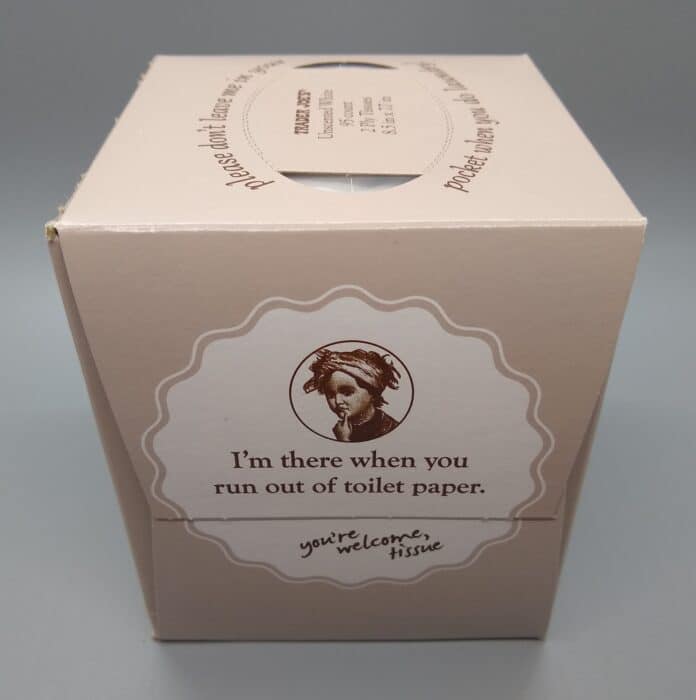 One box of 95 tissues costs 99 cents. Here’s how that stacks up against various competitors, including Aldi:

On the merits of price, TJ’s tissue is competitive. It’s not quite as cheap as the big box of Aldi tissue or the Walmart big box, but it’s cheaper than name brands and is pretty close to other house brand and generic tissue. The tissue also is pretty durable and easy to use.

Where it comes up short is on texture. Trader Joe’s tissue is rough, rougher than anything on the list above. That’s possibly because it’s recycled, but it’s not really comfortable. It feels like institutional tissue, the kind of thing that gets set out in a hospital or school. I worry that if I had to use a lot of this, my nose would feel raw after a while.

Trader Joe’s tissue gets points for being made of 100% recycled materials, for being bleach-free, and for having a pretty good price. Unfortunately, it’s also the roughest of any of the tissue paper we tested. It’s up to you if the trade-off is worth it.