Blue cheese is one of those cheeses that you either like or you don’t. It carries a distinct taste compared to other cheese, owing to the fact that it’s created using a specific mold. Blue cheese is a sharp cheese, and that bite is either a blessing or a curse depending on your tastes.

I’ve seen blue cheese used more as a garnish than as a standalone cheese. I don’t, for example, typically see people eating blue cheese blocks (although I’m sure some people do). Instead, people seem to like to sprinkle the stuff on, say, salads.

Blue cheese dressing, a combination of blue cheese and other ingredients, is used as both a salad dressing and a dip, especially for certain spicy or fried foods, such as hot wings. While blue cheese dressing is sort of in the middle of the pack in terms of popularity, most grocers sell it, including Aldi. 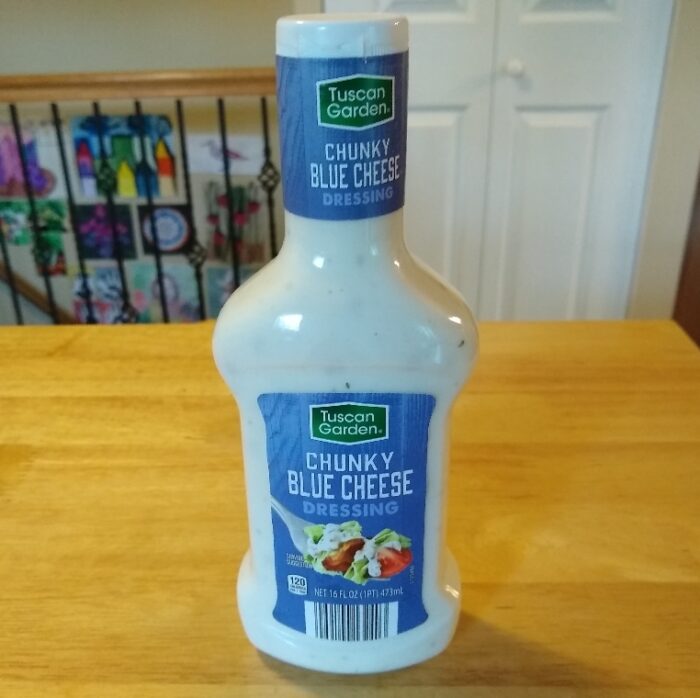 Tuscan Garden Chunky Blue Cheese Dressing is an Aldi Regular Buy, meaning you can find it in stores all the time. At the time of this post, it costs 89 cents for a 16-ounce bottle. The bottle has a paper seal at the top and a foil seal between the cap and the bottle, so you’ll need to break the paper seal, unscrew the cap, pull the foil seal, and rescrew the cap before you can use it. While the bottle can be stored at room temperature while sealed, it should be refrigerated after opening.

The dressing is both gluten free and free of artificial colors. Nutritionally, it is generally high in fat and sodium, and it contains both milk and eggs. 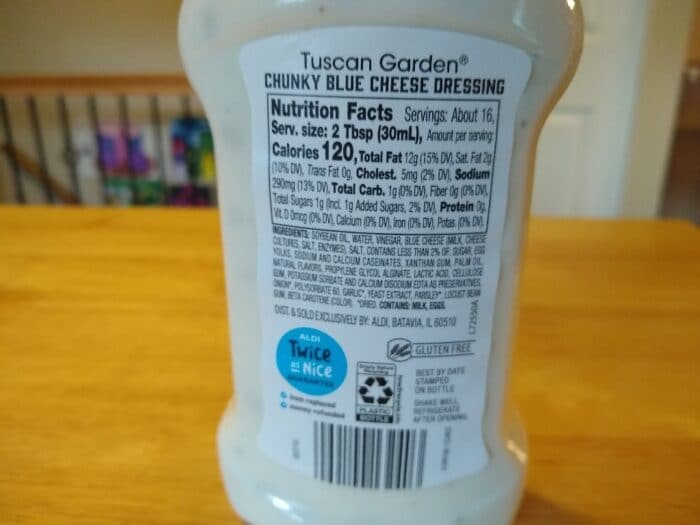 I thought the dressing was pretty good. There are blue cheese chunks in the dressing, and they give it a solid sharpness. I tried it with salad, but I could also see how it would work pretty well as a dip to blunt the heat of spicy foods.