Online petitions are nothing new. Most of them only garner a handful of signatures, and even those that get a lot of traction rarely effect much, if any, change. Nevertheless, groups continue to run them in hopes of influencing governments, groups, or companies to change policies in some way.

Recently, two petitions over at Change.org have received a lot of attention for their efforts to push Aldi, both in the United States and in Europe, to make changes in its supply chain and packaging practices. 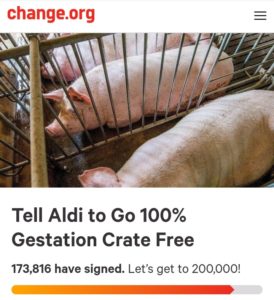 This petition, aimed at Aldi US, is sponsored by Crate Free Illinois, an advocacy group that, according to its website, works to improve animal welfare standards on factory farms. The petition was created on June 16, 2019, and at press time it had over 173,000 signatures.

The petition begins by saying:

Many of us are loyal Aldi shoppers who appreciate the grocery chain’s quality, low-priced foods, commitment to sustainability, and desire to serve its customers in meaningful ways. That’s why it is especially disheartening to learn that unlike almost every other major grocer in the U.S., Aldi still has not committed to stopping its pork suppliers from locking up mother pigs in tiny “gestation crates” for virtually their entire life.

Please sign our petition. Urge Aldi to take the responsible road like so many other retailers and commit to a 100% gestation crate free supply chain by 2022.

The petition argues that “gestation crates are widely recognized as cruel and inhumane,” as “they confine a mother pig throughout her 4-month pregnancy in a space so tiny it’s roughly the same size as her body, so narrow she can’t even turn around.”

Crate Free Illinois adds that “almost every leading company in the food industry has listened to public opinion by adopting a policy to phase-out purchasing from operators using gestation crates —from restaurants like McDonalds, Burger King, Wendy’s, Cracker Barrel, and Quiznos to other cost-conscious retailers such as Costco, Trader Joe’s, Kroger, and Walmart.”

Aldi US has yet to publicly comment on the petition. 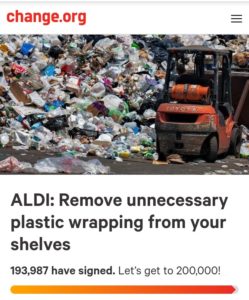 This petition, aimed at Aldi UK and Aldi Ireland, is sponsored by Adriana Calado, a 24-year-old London-based activist. This petition was created on March 25, 2019, and at press time it had over 193,000 signatures.

Citing efforts by UK-based retailer Marks & Spencer and UK-based grocer Tesco to cut down on unnecessary packaging waste, the petition calls “on Aldi to remove plastic from their fruit and vegetables too.”

Aldi is not your small-town discount store anymore. It’s the 5th biggest supermarket chain in the UK and it made over £1bn in sales in 2017. That same year, it sold over 100 million packets of vegetables. And we all know how they come packaged… covered in plastic that ends up in our oceans killing marine life.

The petitioner adds that “Aldi [UK and Ireland] has already pledged to make all of its own-label packaging recyclable, reusable,  or compostable by 2022. However, its fruit and veg are still wrapped in plastic packaging that is mostly unrecyclable and unnecessary in the first place.”

Aldi UK, when asked about the petition, said, “We have replaced more than 2,500 tonnes of plastic across our range with recyclable alternatives [since March 2018] and we are targeting further significant reductions.”