What’s Up With Aldi’s Deli Cheese and Lunch Meat Packaging?

We’ve been writing long enough to see Aldi make all kinds of tweaks to its food products. While some of those changes have been a letdown, most of them have been for the better. We think that, overall, Aldi is a better place to shop for food now than it was ten years ago.

Most of the time.

Starting in early 2019 or thereabouts, Aldi — or whatever vendor Aldi goes to for these particular products — decided to redesign the packaging for its Happy Farms Deli Sliced Cheese. The old packaging was a plastic bag with a Ziploc-style opening. The new packaging is a soft plastic cover over a harder plastic shell that involves pressing the soft plastic back down on the hard plastic to seal it. 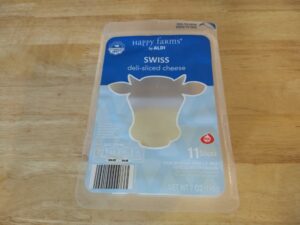 The current look for Happy Farms Deli Cheese Slices. The packaging isn’t happy at all. (Click to enlarge.)

The problem is that the packaging doesn’t work. And by doesn’t work, I mean that it isn’t effective. At all.

The underlying problem isn’t hard to figure out. This resealable packaging relies on a bit of reusable adhesive, rather than the physics of a plastic zip system, to keep everything sealed up. That adhesive doesn’t do nearly as good of a job in keeping the cheese sealed up as the old system did. 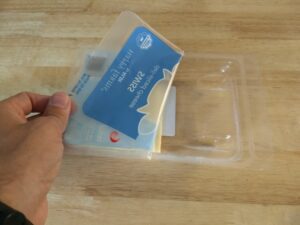 The consequence? In our experience, this cheese goes bad a lot faster than our cheese did in the old containers. When we’ve left it in the fridge as is, it tends to dry out or go moldy well before it should. And we’re not alone. People have e-mailed us. Friends have told us. I had a co-worker explicitly bring up this package at lunch. This is not a small problem.

Of note: some of Aldi’s lunch meats, including several under the Lunch Mate label and Never Any! label, also currently use this resealable design. It’s equally ineffective. The meat tends to go slimy or dry out a lot faster, especially the meat on top, closest to the poor seal.

We do have a solution: we’ve been packaging our meat and cheese in a Tupperware-style container. That seems to work well in preserving our meats and cheeses … but, in my opinion, I shouldn’t have to. The packaging itself ought to be designed to keep things fresh. And it’s not like that kind of packaging doesn’t exist. It does.

I know, because Aldi used to use it.