After World War II, America saw a big increase in demand for easy-to-prepare meals. Millions of soldiers had returned home after the war, and many of them got married, moved to the suburbs, started families, began college, and started jobs … all at the same time. With both men and women in the workforce, young families were juggling a lot of responsibilities.

The solution came in the form of products like heat-and-serve soups and TV dinners. And they certainly were easy. But in recent years consumers have taken a harder look at the ingredients in those kinds of meals. Foods that are easy to prepare are also often loaded with preservatives and other hard-to-pronounce additives, and while that doesn’t automatically make them bad, most people would agree that whole foods are ideal.

In 2017, Aldi took steps to capitalize on the desire for simple-ingredient foods, trademarking the Whole & Simple line of foods. One option in this lineup is this breakfast product. 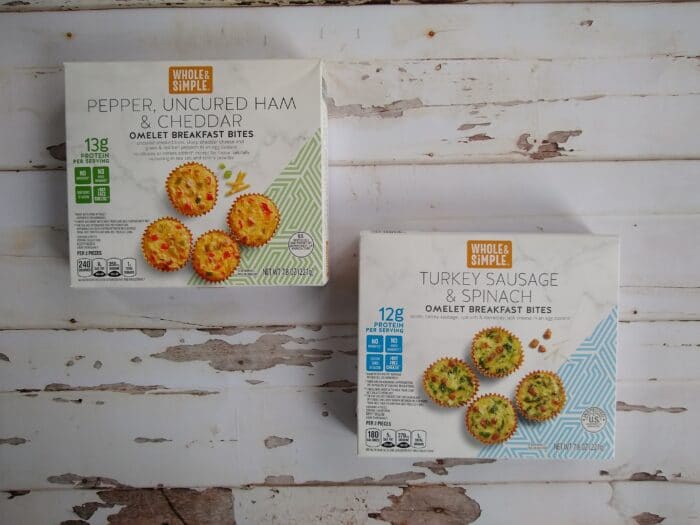 Whole & Simple Omelet Breakfast Bites are Aldi Finds, meaning they’re only in stores for a short time. We tried out the Pepper, Uncured Ham and Cheddar as well as the Turkey, Sausage, and Spinach.

At the time of this post, they cost $4.99 per 7.8-ounce box. Each box contains four bites, separated into two trays of two bites each. That comes out to $1.24 per bite. Of note, while the box calls them “bites,” I would say they’re about the size of a normal muffin. Two of them, I think, make for a decent-sized breakfast.

The bites come with microwave instructions. To heat, you first remove the plastic wrap from the paper tray and place the tray in the microwave. Next, you heat on high for 2 minutes until thoroughly cooked. Finally, you let them rest in the tray for 1-2 minutes before serving. The instructions say the internal temperature should be 165 degrees.

I found that I ended up heating mine for an extra 30 seconds or so beyond that, but your mileage may vary.

They reminded me of a mini quiche without the crust. They definitely have an egg base to them, with a good amount of meat, cheese, and seasonings. Both of them tasted good, with exactly the flavors they advertised and better texture than I would have expected for microwave food.

The ingredients are pretty simple, in fact. There are no preservatives, and no unpronounceable words. On the flip side, simple doesn’t mean 100% healthy, and these bites are high in saturated fat, cholesterol, and sodium. 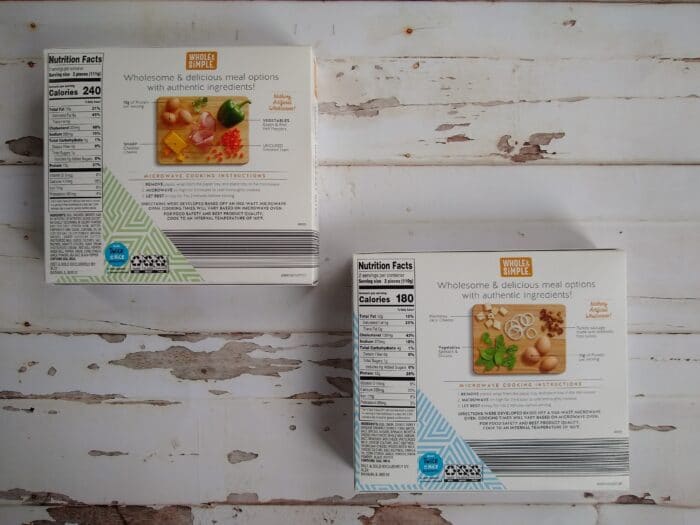 Whole & Simple Omelet Breakfast Bites are a nice combination of easy to make, tasty, and simple. They’re not the cheapest, but if you want something that is low on additives and also makes a decent breakfast, these are worth a look if they’re in your stores. Just keep in mind that, as Aldi Finds, they are only around for a little while.