Skip to content
Home Features Why Aldi Reminds Me of McDonalds

Why Aldi Reminds Me of McDonalds 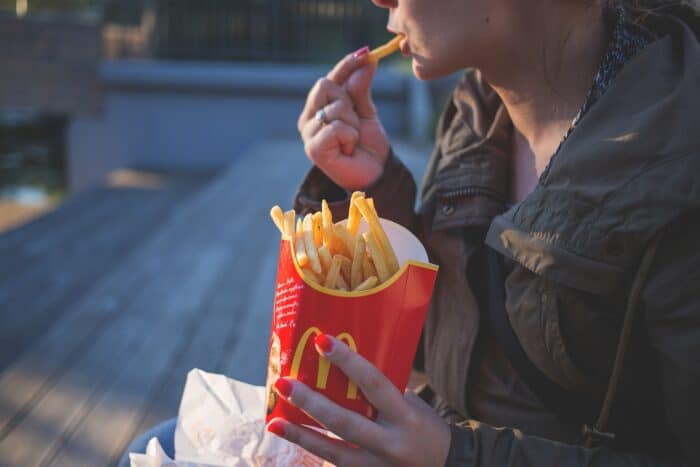 There are certain things that go together. Peanut butter and jelly. The Fourth of July and fireworks. Salt and pepper. But I’m guessing that when most people think of things that go together, they don’t think about the two things you saw in the title for this post. Because Aldi and McDonalds seemingly go together about as well as bacon and ice cream.

I think there is more there than meets the eye, though, and I say it as someone familiar with both. I worked at McDonalds as an employee for two summers in college, and I have written about Aldi for this blog since its inception in 2016. In some ways, the similarities between the two are as much about what makes a company profitable as anything else, but I also think there are some little things that the two both do that make them click.

The two companies are more aware of this connection than you might think. Earlier this year, Aldi and McDonalds in Germany agreed to a temporary employee-sharing partnership during the early stages of the pandemic, when restaurants were serving fewer people but demand at grocers was high.

Before I worked at McDonalds, I spent a summer working at Hardees. This was back before Hardees had been bought out by CKE Brands, the California-based parent company of Carl’s Jr. that would reshape Hardees with racier ads. In my time there, Hardees was a more unassuming restaurant, but it also had a big menu: in addition to burgers and fries (including their excellent curly fries), Hardees also made fried chicken alongside a number of fixings you’d associate with fried chicken. It was a diverse menu, but also a handful to manage.

That’s not to say McDonalds never changed. See, McD’s would rotate a handful of changing products into its inventory … a sort of Aisle of Shame for a fast food menu. Every once in a while, the menu would get a new visitor or two, whether it be a McRib, a triple cheeseburger, or, later on, more artisanal burgers. The Big Mac and Quarter Pounder were still around, of course, but I can tell you from experience that customers came out of the woodwork for the limited-run products. (The era of the 99-cent triple cheeseburger was pure madness.) There’s also the Shamrock Shake that shows up around St. Patrick’s Day, and the Pumpkin and Creme Pie during the fall season.

And don’t forget the Happy Meal. That kid’s bonanza would rotate new toys in each week and new toy themes in every few months. I don’t think a day went by when a parent didn’t make a specific request for a toy we didn’t currently have in stock.

Aldi is famously — or maybe infamously — known for its speed. This is true across the store, but it’s best seen at the checkout aisle, where Aldi cashiers scan your groceries faster than you could ever hope to bag them.

McDonalds, too, is built for speed. The large cooking surfaces are standardized, so you can throw multiple burger patties of either size on the grill and they will come out ready right when you expect them to. The deep fryers are calibrated to take either fries or hash browns, ready exactly when it says they’re going to be ready. McDonalds can mass produce food in ways few other fast food places can.

In my initial time at McDonalds, I was introduced to a little device called a Q-ing oven. I saw it used most often right after a burger was grilled and assembled: a grill worker would wrap the burger, put it in the Q-ing oven, run it for a few seconds, then put the burger in the warming area. See, the Q-ing oven was a microwave, and it would help melt the flavors together. It’s a neat trick that I still use sometimes now with burgers I grill at home.

But why not call it a microwave? Besides the fact that it was reputed to be more powerful than a standard microwave, the other answer is: because McDonalds loves its house brand names. It’s not a 1/4 pound burger … it’s a Quarter Pounder® With Cheese. It’s not a chicken nugget … it’s Chicken McNuggets®. And it’s most certainly not a kid’s meal … it’s a … well, you know. It’s so effective that I have relatives call them Chicken McNuggets even when we’re not at McDonalds. By contrast, I’ve never had a relative accidentally call a burger a Whopper.

Aldi, too, loves its house brand names. Sure, for the first-time Aldi shopper they’re foreign, but once you’ve been in the store for a while names like Millville, Clancy’s, and even Aldi Find labels like Easy Home and Ambiano become as familiar as a well-worn chair. It’s bad enough that we get emails from people thinking they’re separate companies.

I won’t go so far as to say that McDonalds and Aldi are identical in practices. McDonalds, for example, is more specialized in its workers — there is a divide between cashiers and people on the grill, for example — while Aldi is far more generous in pay and benefits, especially compared to McDonalds in the United States. They are also different in their business structure: Aldi is a family-owned private business, while McDonalds is a publicly traded company that franchises its individual restaurants.

But I also think that some of the underlying ideas of efficiency and branding, things that their competitors don’t always do as well, set them apart in their respective universes. McDonalds is, unquestionably, the king of the fast food hill, and by 2022 Aldi will be the third-largest grocer in America. Their winning formulas have some important things in common.