Last fall, I bought a puffer jacket at Aldi for $24.99. I reviewed it here, noting its generous pockets and nice styling. As I wore it throughout the winter, it became my favorite piece of outerwear, even more than an expensive coat from Land’s End I purchased around the same time.

While many people use the terms “jacket” and “coat” interchangeably, some people consider them to be two different types of outerwear. According to Land’s End, the primary difference is length, with jackets being shorter while coats are longer. Jackets also, but not always, may not be as warm as coats.

The Aldi jacket is hip length, in keeping with that definition, but, unlike some jackets, it is surprisingly warm. In fact, it has kept me warmer than I expected even on days when the temperature has dipped into the teens and 20s. Considering that Aldi sold the coat in late November, on the cusp of winter weather, it makes sense that it can withstand some pretty cold temperatures.

I initially wasn’t sure how well the Aldi jacket would serve me on the coldest days where I live in the Midwest, though, where the average winter temperatures range between around 25-40 degrees with occasional plunges into the teens or single digits. So, shortly after buying the Aldi jacket, I decided to order the above-mentioned coat from Land’s End when it was on sale during Black Friday weekend. It’s a very different piece of apparel, being mid-thigh length with down filling, versus Aldi’s jacket that is hip length and has polyester filling. My point was not to have two identical coats but rather to have outerwear options that would suit my needs no matter the weather.

I have gotten to know both pieces well through the winter months, and while they are different and serve different purposes, the cheaper Aldi jacket has ended up being my favorite of the two for some practical reasons such as fit and pockets, and even warmth.

Here’s a closer look at each of the garments. 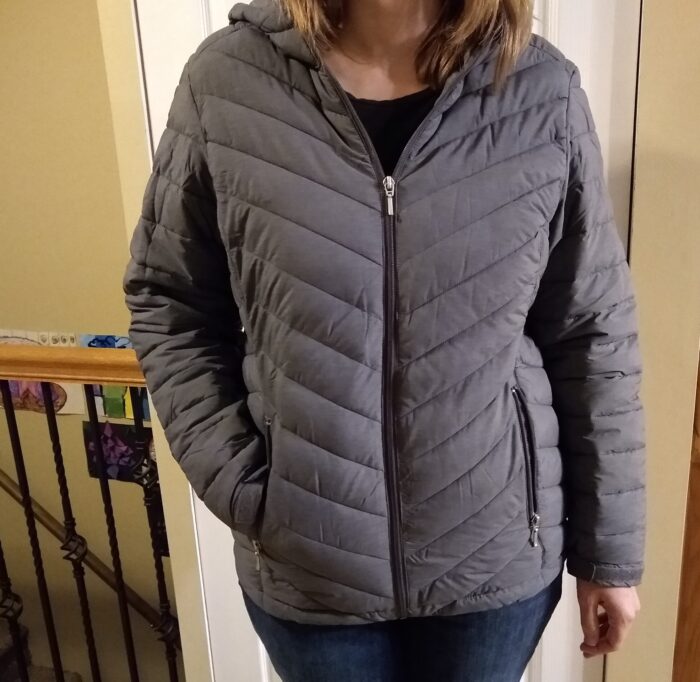 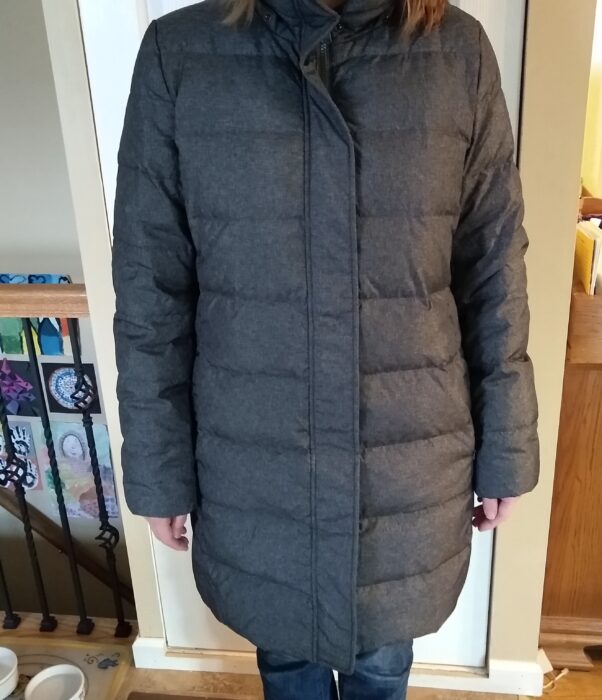 Cost: $99 during a half-off Black Friday weekend sale in November 2019

In short, I appreciate the Aldi jacket because it is roomier through the shoulders, has interior pockets, and has a hood that fits properly, and it performs better than expected in cold temperatures. It has been my go-to throughout most of the season, while running errands or walking kids to school, and it does not have the bulk of many winter coats. I still use the Land’s End coat on bitterly cold days or when I’m going to be outdoors for an extended time, but I prefer the Aldi jacket on days when the weather allows it.

My success with Aldi clothing has often been hit or miss. I love how some things fit, while other things make me question whether they were made with actual human beings’ dimensions in mind. I’m pleasantly surprised by how much I like the Aldi jacket. If the jacket comes around in Aldi stores again next season, I highly recommend it.